Canadian Forces Base Comox represents a Canadian Forces Base located approximately three miles (4.6 kilometers) north northeast of Comox, British Columbia. The facility is frequently referred to as 19 Wing or CFB Comox and is primarily serving as an air force base operated by the Royal Canadian Air Force. YQQ is owned by the government of Canada and is one of two stations in the country that uses the CP-140 Aurora anti-submarine/maritime patrol and monitoring aircraft. The primary RCAF lodger unit is 19 Wing, frequently referred to as 19 Wing Comox.

When to arrive Each airline at the airport has recommended check-in times. YQQ asks all travelers to familiarize themselves with the necessary policies for avoiding the disappointment of being turned away from a flight. There are several reasons why these policies exist, even at a smaller Vancouver Island airport like Complex Valley Airport. For instance, when a customer checks in late, it is not just a matter of the travelers themselves, making it through the security checkpoint and onto the plane. The baggage must also be screened and loaded onto the aircraft, which can require some time and cause further delay. Waiting for even one passenger can sometimes lead to the loss of a landing slot at the destination facility. Whether passengers are flying from Vancouver Island to a vacation destination or the Lower Mainland, early check-in ensures they won’t be disappointed with a missed flight. Different airlines have different recommended che 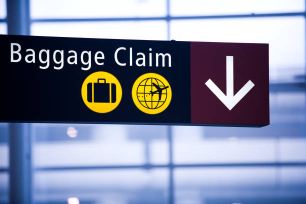 Baggage Claim The baggage reclaim area can be accessed at Comox Valley Airport. Commuters are welcome to advance to the area where they can locate their baggage on the luggage carousel. After picking up, their suitcases passengers are welcome to request preferred transportation by using the complimentary Wi-Fi if needed. Another option is to proceed to the vehicle hire center available at the airport and then leave the facility whenever it is preferred for commuters. 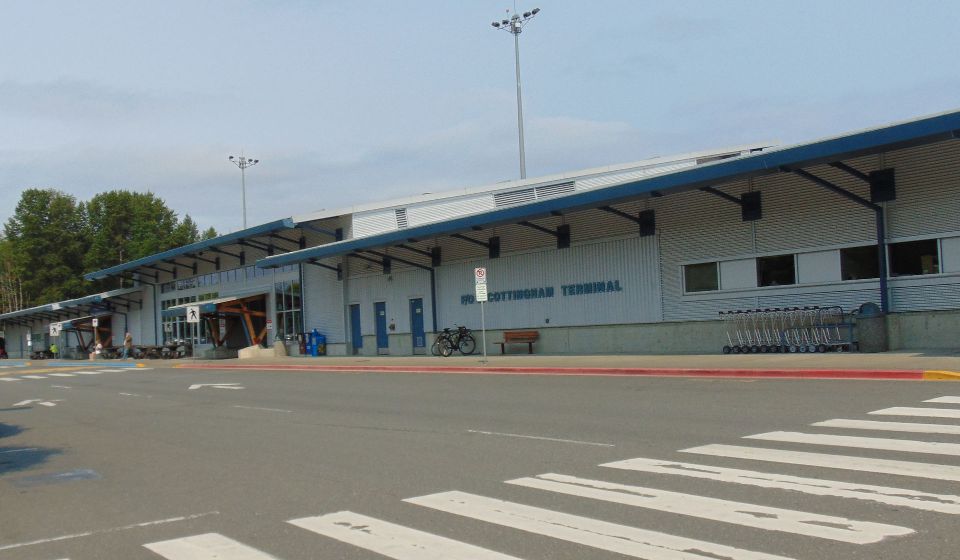 The passenger terminal at Comox Valley Airport includes a gift shop and a cafe. The security checkpoint separates the departure area. Commuters are welcome to find different dining options, stores, and other facilities conveniently available inside the passenger terminal.

Comox Valley Airport can be located on 1250 Knight Road, approximately 4 kilometers northeast of Comox, within a three-hour drive of most Vancouver Island locations. It can be reached by Inland Island Highway 19 north (exit 117). The street address of the property is 1250 Knight Road, Comox, BC. 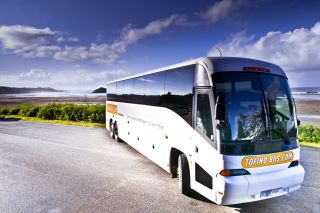 Bus Transit BC Transit operates and owns a fleet of more than 1,000 fully-accessible vehicles across British Columbia. The firm provides cars that are in operation across the area from large urban centers to door-to-door (handyDART) services. Bus transit runs throughout the Valley and stops at the airport. Tofino Bus Vancouver Island Connector operates since 2015, offering daily scheduled services to the entire island from Port Hardy to Victoria. The agency strives to make customers happy with their travel experience and ensure they feel safe while knowing they can depend on the team of knowledgeable drivers and staff. Traveling by Motor Coach is affordable, convenient, and reliable. With plenty of space for baggage, all passengers have to do is sit back and enjoy their journey through B.C.’s West Coast and enjoy the views along the way.

All providers of rental car services at Comox Airport are required to provide cars that are equipped with hand control systems. However, passengers are still recommended to confirm the availability of a specialized vehicle before arrival, to allow sufficient time to position the fleet correctly. Budget For reaching the Budget counter, commuters should proceed to the Budget desk available in the baggage claim area. All the vehicles are located right outside the Budget facility. When returning a vehicle to the rental facility, customers will be shuttled to the airport terminal. After-hours returns are available at the Budget. After customers park and lock the vehicle, they should place the completed rental agreement together with keys in the designated dropbox in the returns are. Debit cards are not accepted at time of rental at the Budget desk. A debit card can only be used to pay for the hire at the time of car return. When returning a vehicle, 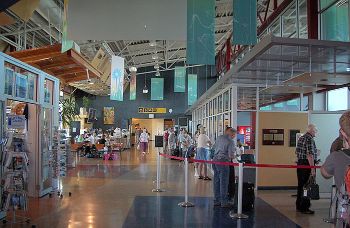 Relieving Areas for Service Animals The designated animal relieving area is available on the lawns adjacent to both sides of the terminal. Receptacles and waste bags are located on the curb, adjacent to the lawn. After the Security checkpoint, there is a designated animal relieving area located airside. For receiving assistance, commuters should contact a CVAC representative or call 250-218-3583, and a staff member will provide mobility assistance and an escort to access the site. Re-screening (through security) is not required if this protocol is followed. Art The Comox Valley Airport is pleased to provide an excellent selection of local art to enhance the traveler experience in the terminal. The airport is proud to facilitate this small but mighty sample of the many visual expressions and art styles that can be found among the hundreds of artists in the North and Central Vancouver Island region. Comox Valley Airport and Comox Valley Arts sha 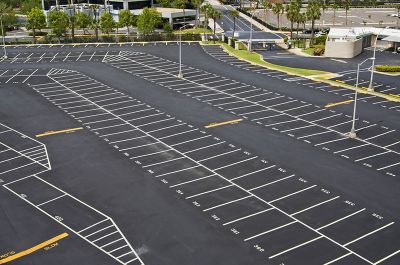 Paved Lot Paved Parking Lot is available at Comox Valley Airport for an hourly price of $1.25. For leaving a vehicle in a lot for a day, the cost is $12.00. Weekly parking costs $72.00, and a monthly pass is available at $276.00. Payment can be made at the yellow kiosk with coins, a credit card, or with the phone using the Pay With Your Phone option. Gravel Lot Gravel Lot can be reached in Zone 372A. The prices for parking a vehicle for different periods are indicated below: Daily - $9.00 Weekly - $54.00 Monthly - $207.00 Cash, as well as change machines, are located at the end of the departures area of the terminal. The airport team will gladly assist passengers with the operation of the parking machines. 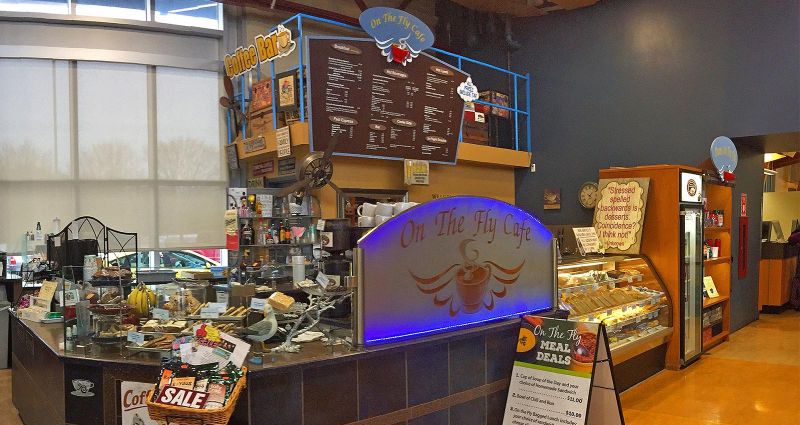 On The Fly, Café available at the airport is pleased to provide visitors with homemade lunches, dinners, and baked goods available at the menu of the facility (including gluten-free items and a famous blueberry and raspberry scones). The cafe is also licensed to serve alcoholic drinks and operates seven days a week. Working Hours: 04:30 am to 5:30 pm. For receiving additional information, passengers can contact the facility on the phone number indicated below: (250) 890-7509.

Canadian Forces Base Comox represents a Canadian Forces Base located approximately three miles (4.6 kilometers) north northeast of Comox, British Columbia. The facility is frequently referred to as 19 Wing or CFB Comox and is primarily serving as an air force base operated by the Royal Canadian Air Force. YQQ is owned by the government of Canada and is one of two stations in the country that uses the CP-140 Aurora anti-submarine/maritime patrol and monitoring aircraft. The primary RCAF lodger unit is 19 Wing, frequently referred to as 19 Wing Comox.

The facility is categorized as an airport of entry by Nav Canada and is staffed by the Canada Border Services Agency representatives.

The Royal Air Force (RAF) established the airfield at the strategic location of the area in 1942. RAF Station Comox was constructed to guard against any possible Japanese threat to North America.

In around 1942, the aerodrome was registered as RCAF Aerodrome - Comox, British Columbia, with no listed elevation or variation.

CFB Comox shares the airfield with a civilian terminal for commercial operations and flights destined to Calgary, Campbell River, Vancouver, Edmonton, and Mexico (Puerto Vallarta) as well as different regional destinations in British Columbia. The base operates a biennial airshow (although not held from 2005 to 2012) to celebrate Canadian Forces Day. The station also houses the Comox Air Force Museum, which features several historical exhibits and aircraft. The base serves as a primary employer in the Comox Valley.