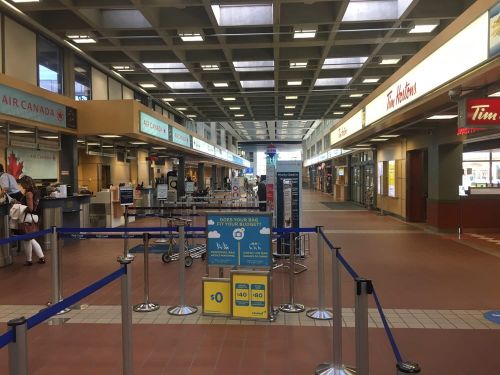 Airport Security Airport Security is accountable for presenting a safe environment as well as the quick and efficient response services to all commuters, air carriers, workers, and partners. By operating a dedicated and productive work to intervene, prevent, and regulate enforcement, the Security staff performs an essential and indispensable contribution to ensure the security of air transportation in the country. Canadian Air Transport Security Authority (CATSA) For ensuring the maintenance and compliance with airport security standards, the Kelowna Airport operates together with the Canadian Air Transport Security Authority (CATSA). The primary objective of these rejoined efforts is to improve passenger safety by establishing specialized airport security devices and developing operational space. CATSA represents a Crown corporation that is in charge of implementing, managing, and running efficient and regular screening services across differe 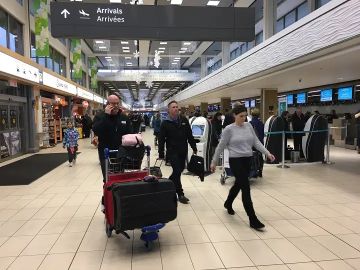 CBSA The Canada Border Services Agency works as a federal law enforcement agency that is intended to implement immigration, border control (i.e., protection and surveillance), and customs services in Canada. Canada Border Services Agency is performing at YLW to managing, protecting, and maintaining the safety of borders in the country. CBSA administrators operate to make sure that all travelers who arrive to enter the country comply with the regulations, as well as the laws in Canada and, are eligible in the country. The organization is detaining passengers who may pose a possible threat and is aimed to remove commuters who are considered inadmissible to Canada. CBSA is also operating to make sure that no prohibited or illegal items are entering Canada. 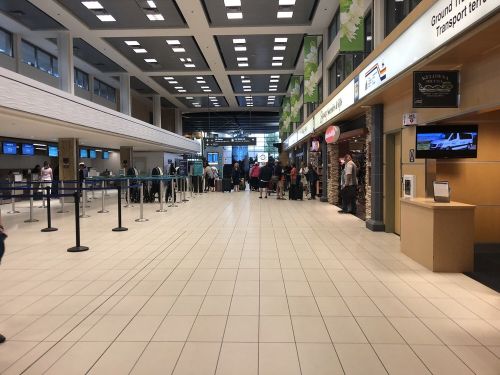 The recently extended passenger terminal building with eight airline gates includes the ‘Escape from Stella Polaris’ glass sculpture and glass building with a fountain. The terminal is available 24/7. Services and amenities inside the terminal are spread at several levels. The first level is divided into three sections. Arrivals area The western end of the building includes the Arrivals area. An international oversized baggage claim can be found near Gate 1 across from its Canada Border Service as well as the International baggage reclaim carousel. Outside of this secure area, passengers can have access to the domestic arrivals area near gate 2, together with a Tourist information counter in the center, currency, local baggage claim, phones, and baggage carts, rental car desks, airport security, baggage service, and terminal exit. The center of the first level consists of the check-in area, which includes Tim Hortons, Airport Ambass 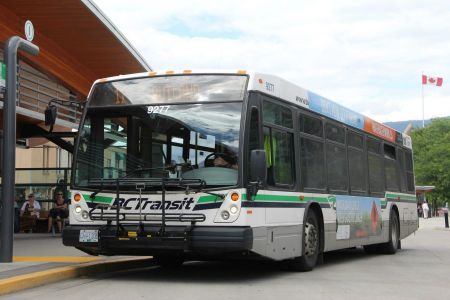 Shuttle Bus For getting from Kelowna International Airport to desired destinations, passengers can use Airport Shuttle Bus services available outside of the south terminal building entrance next to the pre-board screening that can be reached by following signs. Commuters are welcome to contact the agencies directly for scheduling a transportation service or booking a group rate. Falcon Bus charter can be reached on 250-448-9062. Kelowna Airport Shuttle is accessible at the number 1-888-434-8687 or 250-765-0182. For contacting the Vernon Airporter / Premier Pacific Coach Lines, commuters should dial 1-866-542-7575 or 250-524-7574. Transit Bus The regional Transit bus stop is available on Airport Way, near the rental car lot, by the railway tracks. Hwy 97 includes a bus stop near the junction of Airport Way and the highway. During the peak times, Route 23 - the Lake Country Loop - departs approximately every 15 minutes. Passengers are recommended

Let’s Go Let’s Go transportation company has years of experience and knowledge to meet the specific Kelowna Airport transportation needs of the passengers. Instead of waiting to get airport transportation once arriving in Kelowna, to find out there is a lineup of passengers waiting for ground transportation. Commuters are welcome to book their transportation online with Let’s Go, and let their driver take care of everything. However, travelers should consider that rates and schedule are subject to change At the time of booking, passengers are asked to let the agency know if their infant/toddler requires a booster or car seat Pick-up times are approximate. Commuters are recommended to allow a lease of 5-10 minutes leeway for other pick-ups Shuttles are subject to availability Services are not conﬁrmed if online booking request is left only on the answering machine within 24 hours of the pick-up Passengers should remembe 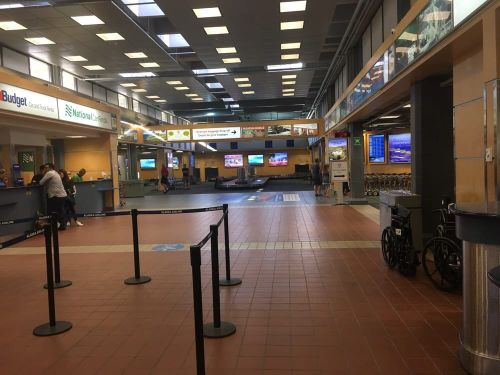 Avis Avis car rental counter is available at YLW. Travelers are welcome to proceed to the hire desk in the baggage reclaim area or the kiosk that can be found in the parking garage for receiving their keys and preprinted rental agreement. All hire vehicles are parked outside, within walking distance. After-hours Returns are possible at Avis for passengers’ convenience. After parking and locking the vehicle, customers should place the finished contract and the keys in the Drop Box placed in the Returns area. Avis operating hours: Monday - Friday: 09:00 am - 02:00 pm Contact information: (1) 250-491-9500 Website: https://www.avis.com/en/home 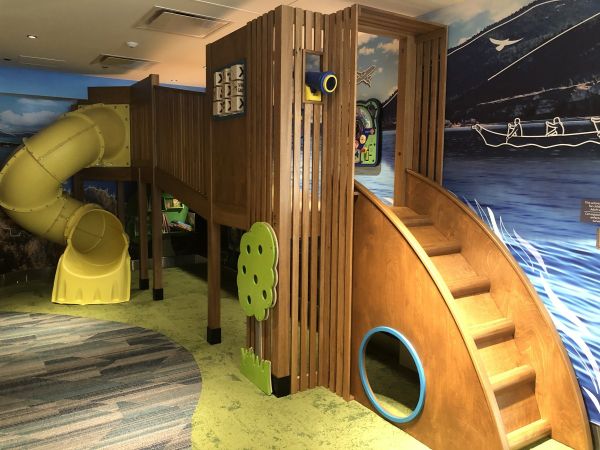 Wi-Fi Wi-Fi at the airport is fast and complimentary. Recently, the facility upgraded the Wi-Fi, so it’s quicker and more comfortable to access from anywhere in the terminal. Whether passengers are checking their work email or streaming cute animal videos, they will have the convenience of being connected to a fast and free network. Grant Thornton Business Centre The business center is accessible for all commuters in the departures lounge and features private work stations with charging stations and a complimentary Wi-Fi connection. YLW also includes a boardroom which is available for business bookings. Located on the ground side concourse, Business Centre is equipped with an overhead projector, a computer, and a whiteboard. Family Adventure Zone The airport recently renovated the play area to revitalize the space and transform it into an active play area for children of all ages. The new Family Adventure Zone provides a tree-fort inspir 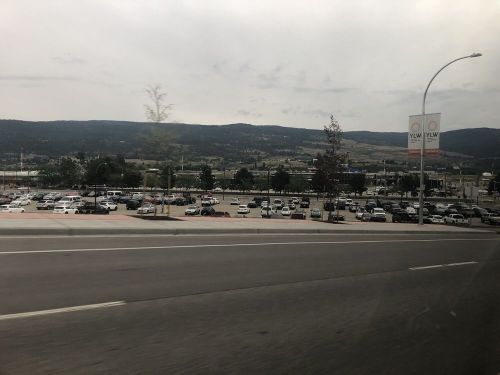 Short-Term Lot Cash, debit, and credit payments are accepted at the ticket booth from 05:30 am until a half-hour after the last flight. Credit cards are allowed in the express lane for cars departing after closing. Commuters should remember that YLW no longer offers complimentary 15-minute parking in this lot. Curbside parking Curbside parking is accessible for $2 for a maximum time of 30 minutes. Customers can buy a ticket from a meter and display it face-up on their dash. Commuters should consider that vehicles parked in the active passenger loading area are towed. Cell Phone Waiting Area Visitors can avoid circling the terminal building while waiting for their party to arrive. The Cell Phone Waiting Area is a complimentary parking lot conveniently located beside Airport Plaza. Drivers can remain in the lot until arrival passengers let them know if they’re ready to be picked up. Electric vehicle charging stations Electric vehicle cha 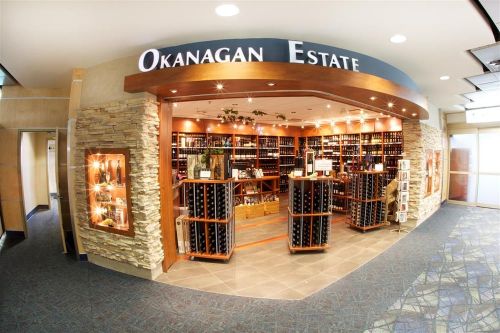 WhiteSpot Restaurant and Lounge This full-service facility is readily available inside the main terminal and is operating daily from 07:00 am to 08:00 pm. The full menu in the restaurant is available for taking out. For ordering, passengers should stop by the restaurant in person or call 250-451-9781. Tim Hortons Tim Hortons is open daily from 05:30 am - 07:00 pm. Tim Hortons offers visitors flavored cappuccinos, premium coffee, specialty teas, fresh sandwiches, homestyle soups, and new baked goods. Spirit of the Okanagan Art Kiosk The airport has partnered with Suk’ ʷtəmsqilxʷ West Kelowna Arts Council and Skyway Gourmet Ventures to provide passengers with Okanagan themed artwork available for purchase in the departures lounge. Featuring over 20 yearly juried artists, the Art Kiosk includes a breadth of the original sculpture, First Nations artwork, jewelry, and contemporary pieces that celebrate the values, beauty, and

In 1946, a referendum was held which authorized the city of Kelowna to buy the 320-acre Dickson Ranch for $20,000. The property was opened in 1947 with a 3,000-foot long grass airstrip and a small terminal building. Commercial service first started in 1958 by Canadian Pacific Airlines to Vancouver. In 1960, the runway was extended to 5,350 feet. Through the 1960s and 1970s, the facility continued to be developed and expanded with a new terminal, an onsite weather office, and an air traffic control tower. From the late 1960s to the mid-1980s, Pacific Western Airlines represented the primary passenger air carrier which served the airport with Boeing 737-200 jetliners on direct and nonstop flights between Kelowna and Calgary, Vancouver, Edmonton, and other small cities in British Columbia. Throughout the 1980s and 1990s, cargo and commercial traffic increased, requiring more than $10 million of investment in upgrades to the runway, terminal, and airline operating facilities.

In 1996, Greyhound Air was operating daily nonstop service to its hub in Winnipeg with direct, one-stop service to Hamilton, Ontario. Also, in 1996, WestJet was running a continuous Boeing 737-200 jet service to Edmonton, Calgary, Vancouver, and Victoria, British Columbia, together with direct, one-stop 737 services to Regina. In 1998, a $20 million development and expansion program doubled the size of the terminal, extended parking, and increased airside facilities to accommodate the projected 1 million travelers by 2011. By 1999, five airlines were serving Kelowna.