The facility is part of the National Airports System and is managed and operated by the Government of the Northwest Territories. The Airport provides regularly scheduled passenger service as well as several freight services. In 2007, the terminal handled approximately 527,000 passengers.

Check-In Time Check-in times at Yellowknife Airport can vary depending on the airline and other factors. For more detailed information on specific flights, passengers should check with their airline before arriving at the Airport. The facility recommends commuters to check-in at least two hours before the scheduled departure time. Airport Security Airport Security is in charge of providing and maintaining a secure environment and effective and prompt response services to all commuters, operators, air carriers, and associates. Through its productive and dedicated work in intervention, prevention, and management enforcement, the Security team makes a necessary and essential contribution to guaranteeing the safety of air transportation in Canada. The service is performed based on facility safety and security policy, which is being renewed regularly to take into consideration developments and changes affecting the airport environment. Canadian Air 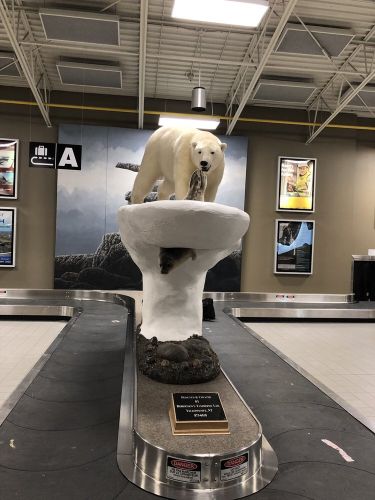 CBSA The Canada Border Services Agency represents a federal law enforcement agency that is responsible for immigration enforcement, border control (i.e., protection and surveillance), and customs services in the country. Canada Border Services Agency is working at YZF to manage, control, and secure Canada’s borders. Agents are operating to make sure that all passengers who enter the country are eligible and comply with the regulations and laws in Canada. The agency is detaining people who may pose a possible threat and removes travelers who are deemed inadmissible to Canada. CBSA is also in charge of inspecting the goods and products that arrive at the country’s borders to ensure that nothing illegal is entering the country. The representatives are also ensuring that all applicable taxes and duties on the merchandise are collected. Baggage Carousel When passengers enter the terminal building, which also represents the main airport

Passengers should remember that Yellowknife Airport isn’t operating 24 hours a day. From the last passenger flight arriving after midnight and about two hours before the early morning – 06:00 am – passenger flight that there is no security available. Therefore the Airport building is closed to the public.

Taxis A common misconception regarding Yellowknife is that it does not have any taxis. An abundance of taxis and two different companies are available in the area. Aurora Taxi and City Cabs are two agencies that are providing their taxi services locally. Taxi cars are always waiting from the left side outside of the terminal exit doors. In case passengers cross the road, this means they have gone too far and missed it. There are always enough taxi cabs available for each traveler, so there is no need to rush. A typical taxi ride into Yellowknife costs about $15-20 and takes approximately 10 to 15 minutes, depending on the final destination of riders. Taxis operate for 24 hours, so regardless of passenger’s arrival time-delayed or not – there are always taxis available. 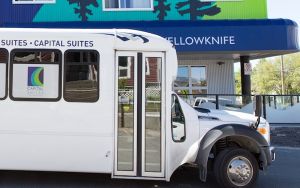 Hotel Shuttle Most of the hotels in the city all pitch in for the same shuttle, so it easy for passengers to find the right shuttle. On occasion, the shuttle bus driver comes right into the terminal building to great and guide commuters to the bus. In other cases, the bus is always conveniently parked in the same spot outside. If travelers walk out of the exit door of the building and walk across the first road right outside the door within the pedestrian white lines to the first median, the shuttle bus will be from the straight left. It often has the logos of the hotels it stops at on the side. If travelers are unsure whether the bus goes to their hotel, it is possible to ask the driver who will gladly help. If the bus isn’t there, passengers might have to wait five to ten minutes. 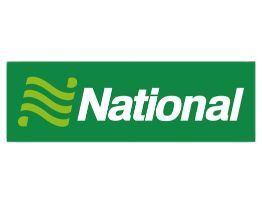 Car Rentals If passengers rented a car, the first thing they need to do is go to the rental booth of the company they made the booking with (Budget, National, etc.). Counters are very easy to find. If commuters walk in the doors off of the tarmac from the plane and keep going straight towards the exit door of the terminal building, the rental car booths are conveniently located just to the right of that door. Budget The budget counter can be found inside the airport terminal near the baggage claim area. All the cars are parked outside the building within walking distance. Commuters can follow signs when returning a vehicle. The car can be parked in any Budget space and keys, as well as the contract, returned to the rental desk for check-in. After-hours return is available at the agency. After parking and locking a car, the completed contract and the keys should be placed in the key dropbox. At Yellowknife Airport, the minimum age is 25 for all 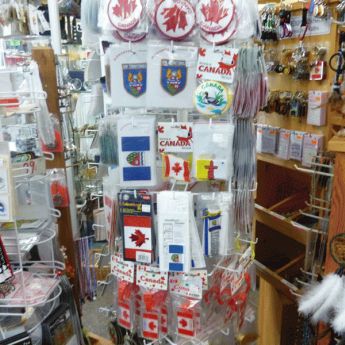 Visitor Information If passengers need any information about the facility or Yellowknife right away, they can visit the Arctic Ambassador desk in the arrival area. When travelers come in off the tarmac and walk straight ahead, counters can be found to the right. Commuters can also find the Yellowknife Visitor Guide available. Gifts and SouvenirsJust next to the exit departure doors of the property is a small gift shop called The Cabin. The facility offers passengers to pick up a souvenir of Yellowknife. Filled with locally made products as well as the other Northern related products, The Cabin is open from 04:30 am to 08:00 pm weekdays, and 09:00 am to 05:00 pm on weekends. Lost Baggage If in the unfortunate event, passengers lose their luggage or it doesn’t arrive, they will have to make the short walk back to the departure ticket desk of the airline you flew on to report it to an agent. Washrooms Yellowknife Airport includes public bathr 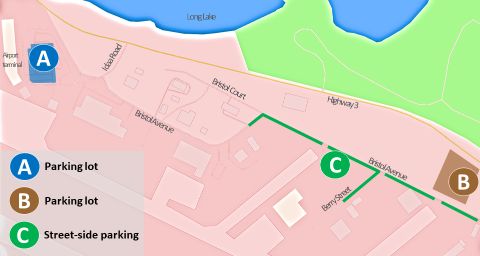 Parking lot A The short-term parking lot is conveniently located outside the main airport terminal building. The fares for parking in a designated short term area is: $0 for less than one hour $1 for each hour or portion of an hour after the first hour the car is parked, to a maximum of $15 for 24 hours $15 for every 24 hours to a maximum of $75 for a week $75 for each week to a maximum of $225 for a month. Users receive a ticket when entering the lot and can pay before leaving the lot, inside the terminal building, or at the parking lot exit. When paying inside the terminal, the machine accepts VISA, cash, and Mastercard. In case of paying at the parking lot exit, the machine accepts only Mastercard and VISA. Parking lot B The long-term parking lot can be found on Bristol Avenue, directly across the street from Air Tindi and Braden Burry Expediting. The cost of parking a car in the long term lot is $7.50 for every 24 hours to a maximum of $150 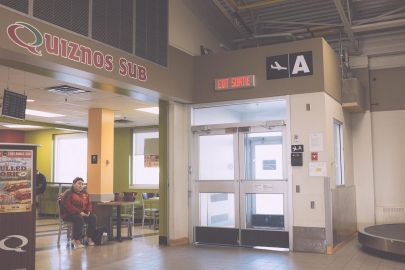 Food Yellowknife Airport has long experience in the department of food. At the moment, there is a small Quizno’s Sub restaurant that provides their selection of pizzas, sandwiches, and salads, along with drinks and coffee. Yellowknife’s longstanding shop, Javaroma, is also available at a coffee stand located inside the Airport serving up their fresh coffee, sandwiches, specialty drinks, bagels, and muffins. Javaroma also has a small stand available at the security of Gate 1. The working hours vary, so commuters should be cautious and depending on either of these two vendors.

The facility is part of the National Airports System and is managed and operated by the Government of the Northwest Territories. The Airport provides regularly scheduled passenger service as well as several freight services. In 2007, the terminal handled approximately 527,000 passengers.

In 2008 the passenger terminal of YZF experienced an expansion to the departure/check-in section, almost doubling the size of the terminal. The Airport is categorized as an airport of entry by Nav Canada and is staffed by the Canada Border Services Agency (CBSA). CBSA representatives at the facility can handle general aviation aircraft only, with no more than 15 passengers.

RCMP (The Royal Canadian Mounted Police) “G” Division manages a hangar for its air section located south of the passenger terminal. It represents adjacent to a hangar handled by the Royal Canadian Air Force (RCAF) to house the CC-138 Twin Otter and other aircraft operated by 440 Squadron, a subsidiary of 17 Wing.

Canadian NORAD Region Forward Operating Location Yellowknife is conveniently located south-west of the airstrip. It was built for forwarding deployment of the CF-18 Hornet in times of conflict. It also includes a CC-138 permanently based at the Airport for search and rescue missions.