The airport, previously known as Carr Field, was built in 1941 by the United States Army Air Forces. Initially, the facility was planned to be used as a pilot training airfield. Activated on 1 June 1942, the airport was assigned to the AAF Gulf Coast Training Center, with the Army Air Force Pilot School enabled. The school aimed to train cadets to fly bombers and transports. It was assigned to the jurisdiction of the Army Corps of Engineers in 1946. Later the property was disposed of by the War Assets Administration (WAA) and deeded to the government. 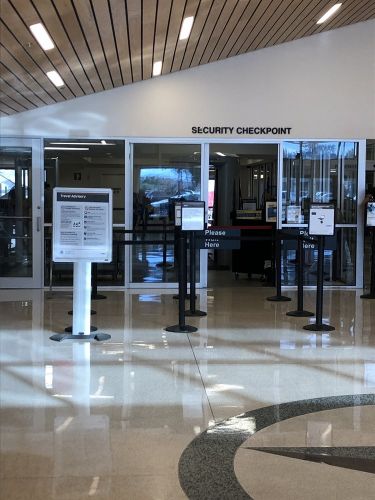 TSA Transportation Security Administration is accountable for developing methods that are aimed to keep passengers safe by performing security measures that are intended to minimize possible terrorist threats. Principally concerned with air travel, the organization has its representatives at San Angelo Regional Airport, where TSA operators are in charge of monitoring passengers at the security checkpoints. All the passengers are obligated to go through screening as well as other TSA systems that include checking their belongings individually. The TSA method at the SJT facility is similar to those at the majority of airports. TSA PreCheck Currently, SJT allows full TSA PreCheck abilities. With this method, travelers with TSA PreCheck will see the method on their boarding pass. PreCheck commuters line up in a separate line, located to the right of the usual one. PreCheck clients are blended into the front of the regular security line. The precheck 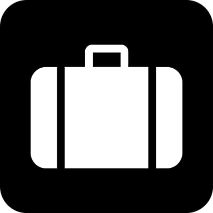 Baggage Claim After arriving at the San Angelo Regional Airport, commuters are welcome to proceed to the baggage claim area, where after locating their luggage, they can leave the facility whenever it is suitable for them. 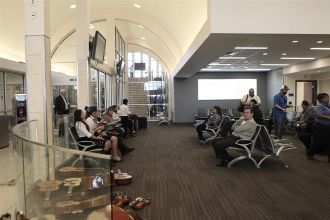 The renovated passenger terminal at San Angelo Regional Airport starts operations daily at 04:00 am and closes about 30 minutes after the last flight. Airline ticket desks, as well as TSA screening checkpoints, are available at least one and a half-hour before the time of the first scheduled flight departure. The terminal includes three airline gates and two cafes. However, passengers are recommended to contact their airline to confirm ticket counter opening and departure times. 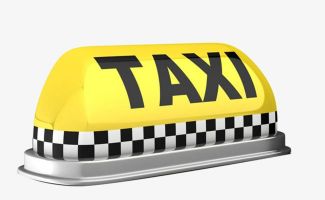 Taxi In many cities, taxis are acknowledged to serve as one of the most comfortable transportation means to move around. Various firms, like AA Shuttle Service, Checker Cab, Yellow Cab, and Red Ball Taxi, are operating in the area. However, all commuters are recommended to contact the selected taxi service only when being completely ready to leave the terminal, so drivers would not have to wait outside, or circle around the building and cause traffic. Another recommendation for all customers is only to use authorized taxi organizations to avoid possible scams and other issues. 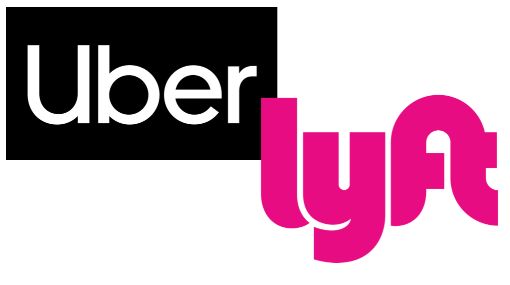 Rideshares The San Angelo Regional Airport has installed a staging area in collaboration with Uber and Lyft. Rideshare drivers are obliged to stage in the geofenced area as listed on their app while waiting for ride requests. Rideshare firms like Lyft and Uber are offering their services locally and are ready to drop passengers off at the departure level area. Travelers should inform their driver about the airlines and terminal upon entering the airport premises. It is also advised to consider several aspects before ordering a car. First of all, it is necessary to keep in mind the baggage necessities and choosing a transport that will fit all the suitcases. For example, the standard economy rides are frequently operated with cars like Toyota Prius, Toyota Camry, Ford Escort, and Ford Escape. These types of vehicles can fit four persons with two to three large bags or three-four medium ones. Clearly, in case of having fewer passengers, there is a

Avis After arriving at San Angelo Regional Airport, customers may want a vehicle, and they will find excellent deals at Avis. From the professional service, commuters will receive the most enjoyable experience at SJT car rental. What’s more, it is possible to accelerate a travel experience with Avis Preferred, a free membership that enables customers to skip the line and head straight to their car. General Directions for airline passengers require them to advance to the Avis desk placed in the baggage claim area. Rental cars are parked outside the building, within walking distance. Walk-up renters should follow signs for “Arrivals” or “Baggage Claim” that will lead them to the baggage claim area door. After proceeding inside, customers will discover the Avis desk. For After-hours Returns, clients should park and lock the automobile and then place the completed contract as well as the keys in the DropBox positioned 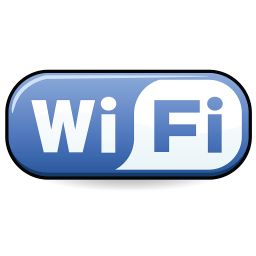 Passenger Waiting Lounge Area San Angelo Regional Airport welcomes commuters to enjoy its spacious passenger waiting area, conveniently located inside the terminal building. Power Outlets are also available for visitors to charge their phones, tablets, or laptop while waiting for the arrivals. A flight map that shows inbound and outbound flights also can be found in the passenger waiting area. ATM An ATM is accessible inside the terminal building near the passengers’ waiting lounge. The airport is not capable of performing currency exchange. Travelers should check with their credit card company regarding ATM charges before using the ATM at the San Angelo Regional Airport. Vending Machines Vending machines are available both after and before the Passenger Screening Checkpoint and are open and offer traveler’s favorite soft drink and snack choices! Water fountains also can be found before and after security at no charge. Traveling wi

San Angelo Regional Airport makes parking quick and comfortable, but the most important benefit of it is that it’s complimentary. The airport has ample short- and long-term parking. Parking in the short term parking lot is limited to 48 hours, while parking in the long term area is limited to 45 days. Extra overflow parking is accessible for charter flights or during peak travel seasons. Commuters can contact the Airport Administrative offices for concerns and questions regarding parking. All parking is set in a wonderful, West Texas landscape. The area is well-lighted and patrolled and monitored by airport and City police. Disabled parking is available directly adjacent to the terminal. 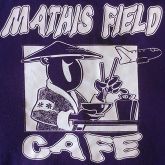 Due to representing a relatively small facility, San Angelo Regional Airport does not include a duty-free area. However, the terminal provides two restaurants, both located before the security checkpoint. Mathis Grill The Mathis Grill is a small, owner-operated facility that specializes in serving classic American food. The cafe takes great pride in offering hot, fresh, made-to-order meals. Mathis Field Cafe Mathis Field Cafe is welcoming commuters to visit and try out various options listed on the menu.

The airport, previously known as Carr Field, was built in 1941 by the United States Army Air Forces. Initially, the facility was planned to be used as a pilot training airfield. Activated on 1 June 1942, the airport was assigned to the AAF Gulf Coast Training Center, with the Army Air Force Pilot School enabled. The school aimed to train cadets to fly bombers and transports. It was assigned to the jurisdiction of the Army Corps of Engineers in 1946. Later the property was disposed of by the War Assets Administration (WAA) and deeded to the government.

The airport was renamed after local Jack W. Mathis, a bombardier who even received the Medal of Honor. It now offers daily commercial service for the City of San Angelo, its adjacent metropolitan area, as well as nearby Goodfellow Air Force Base, with aviation to Dallas-Fort Worth International Airport.

More than forty years ago, the San Angelo City Commission transferred a resolution to consider offers for the founding of a city airport in or near San Angelo.

Eventually, an agreement was made with West Texas Utilities to buy 670 acres of covered rangeland situated on Knickerbocker Road near Lake Nasworthy. Clearing away the grass burr covering and mesquite thickets was the priority for the Work Projects Administration after a $363,922 federal airport construction project was approved.

By June of the next year, the first Municipal Airport Runway had been cleared an area 650’ wide and 1500’ long. In the process of making the new runway, about 47 cords of wood had been stacked. By this point, the number of WPA workers had reached 300 men. In the fall of 1941, additional federal funding of over $38,000 was approved to offer lighting facilities for the airport. In November, the Standard-Times announced that the new facility, which was given the name of Carr Field, would be finished in less than a month. When World War II came before it was completed, city officials turned to the Army Air Corps.

In March 1942, Senators W. Lee O’Daniel and Tom Connally declared that the Army would establish an Air Corps Training Center on the location. To facilitate the influx of equipment and men, Carr Field was to be grown and new buildings constructed at the cost of $5 million.

In the end, it is considered that a great deal more than the original $5 million was spent in construction costs by the federal government from 1942 to 1947. Four 5500 foot runways with connecting taxiways and a 575’ x 3600’ concrete airplane parking ramp were built on the airfield. Over 250 new buildings and seven large hangars were added to the city-owned property. Together with complete electric, sewer, water, and gas utilities, the airfield provided services for over 4,000 military personnel.

The facility represented a successful and beneficial war-time flying and training center. During this time, Carr Field was renamed to Mathis field after Lieutenant Jack Mathis, who was posthumously given the Congressional Medal of Honor for Valor throughout the War. Eventually, a transfer agreement was settled after the War, which enabled the City of San Angelo to reclaim its first 673.66 acres as well as retain a lease on approximately 896.7 acres of Washington County School land. The War Assets Administration also transferred nearly all government-build-and-owned property improvements to the city.