Pullman–Moscow Regional Airport located in the northwest United States, can be found in Whitman County, Washington, four miles (6 km) west of Moscow, Idaho and about two miles (3 kilometers) east of Pullman. The property can be accessed by spurs from State Route 270 and includes a single 7,101-foot (2,164 m) runway, that is headed northeast/southwest (5/23), which entered service in October 2019. The previous runway (6/24) was 6,730 feet (2,051 m) and aligned with Moscow Mountain (4,983 feet (1,519 m)) approximately twelve miles (20 km) to the northeast, the highest summit in the area. 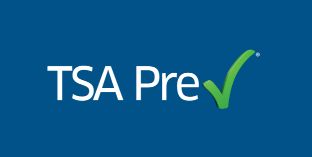 Check-in options There are several options for passing check-in procedures at the airport, and commuters are welcome to choose according to their preferences. Ticket Counter Check-in When passengers are traveling with a paper ticket or just require some additional assistance with the check-in procedures on the date of departure, the customer service representatives are always ready to assist passengers with an in-person check-in. However, travelers should consider that checked luggage is only accepted within four hours of their scheduled departure. Online check-in Passing through the check-in procedures online, allows travelers to skip the check-in line at the airport and just head straight for their gate. However, it is important to print out a boarding pass one to twenty-four hours before the scheduled departure. Kiosk check-in Another option for commuters to check-in is by using the kiosks that are conveniently accessible at all airports w 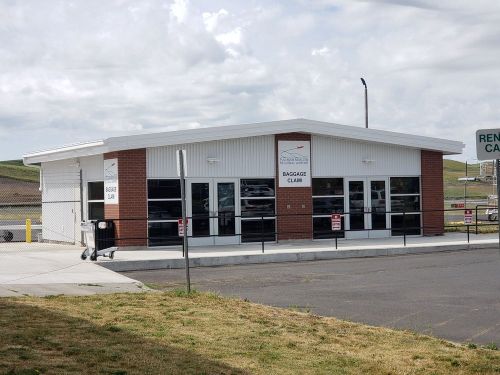 Baggage Claim The claiming baggage process is now faster once passengers exit the plane and walk through the rotating turnstile, where the baggage claim building is located on the left side. After arriving at the Pullman/Moscow Regional Airport, travelers are welcome to enter the luggage claim area, where after entering the area and finding their belongings, they can leave the airport whenever it is suitable for them. 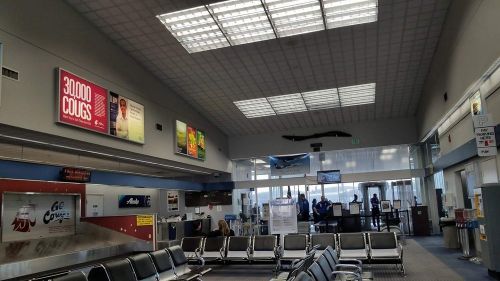 The modest commercial terminal consists of a single large room, divided between pre- and post-security areas by a security checkpoint and glass walls. The waiting area includes all space beyond the checkpoint but is not usually used for waiting since most passengers pass through the security checkpoint right before boarding. Both passenger gates are located on the ground level and have doors to the tarmac; travelers board via the fold-down aircraft-door stairs, or airstairs (for bigger charter aircraft). Gate one, which is on the east side of the terminal, is used by Horizon Air.

Taxi In many areas, taxis are considered to serve as one of the most convenient options to move around. Various agencies are operating in Whitman County. However, travelers are asked to contact the preferred taxi service only after being able and ready to leave the facility, so drivers would not wait outside, or circle around the terminal building, causing traffic. Another advice for all passengers is only to use authorized taxi companies to avoid possible scams and other issues. College Cabs Some of the local companies are College Cabs that can be reached on the number (855) 829-4487. Moscow Taxi Moscow Taxi can be contacted at the number (208) 892-454. Pro Cab Pro Cab - (509) 338-0500 or (509) 330-7433.

Hotel Shuttle When arriving at Pullman/Moscow Regional Airport, passengers can free themselves from the stress of finding transportation options and use the transfer services offered by the Hotels where they stay. Several Hotels are providing shuttle transportation services for arrival guests. Quality Inn Paradise Creek can be found approximately six kilometers away from the PUW. For offering its customers with the best services, the property is offering free shuttle transfer services for customers. Other hotels that are proposing similar complimentary service for guests are Holiday Inn Express and Suites Pullman with the same distance from PUW and Quality Inn Conference center, that is located further, about 36 kilometers from the airport. Uber and Lyft Popular rideshare companies like Uber and Lyft are conveniently offering their services in the city and are prepared to drop passengers off at the departure area of the airport. Riders are requ

Avis Avis car rental desk is comfortably located in the baggage claim of the airport and promises to offer the perfect vehicle to accommodate its customers. All the options are conveniently parked outside the terminal building. Passengers are welcome to proceed to the desk where, after presenting their valid driver’s license, they will be provided with keys and preprinted rental documents. After-hours returns are possible at the agency. The drop off locations is the same as in case of pick up. When returning a car in after-hours, after locking and parking a car, customers are required to place the contract together with keys in the special dropbox, which can be found in the returns area. Operating hours: Sunday - Saturday: 12:00 pm - 04:00 pm; Contact information: (1) 509-332-7242 Website: https://www.avis.com/en/home Hertz Hertz desk is available at the baggage claim area of the terminal. At the start of rental with both debit and credit

Vending Machines An automated machine which is intended to provide the users with a diverse range of products: snacks, beverages can be found at the Pullman/Moscow Regional Airport. A vending machine dispenses a product to the users based on the amount of money inserted and the selection of the product. There are three vending machines (one for food, two for beverages) for snacks and a couple of quarter candy crank machines as well. Wi-Fi Pullman/Moscow Regional Airport understands passenger’s need to stay connected and is providing wireless internet services throughout the terminal building for everyone at the airport. Travelers can connect wirelessly while they are waiting for their flight or ride. Lost & Found Sometimes traveling can be stressful, so losing any of the belongings can make the entire travel experience very frustrating. The facility offers its lost and found services for passengers. In case of dropping an item in the

Parking is accessible in front of the airport building to the east of the terminal. All parking spaces cost $5 per day; this includes ADA spaces and gravel lots. The parking kiosk can be found inside the terminal building, on the right side, past the men’s restroom. The kiosk requires the stall number and the number of days passengers intend to park. If customers do not know or see a stall number, they should stall number 500 and place the receipt on their dash. The kiosk accepts both debit/credit cards and exact cash (the kiosk does not give change back). There are administration charges added to parking if not pre-paid – $5 will be added to the first day, with an additional $5 per week. Putting the receipt on the dash of the car helps the parking attendants know the fee is paid for parking. If passengers forget to pay for parking before the flight, there will be a Parking Fee Due Envelope on the windshield, with administrative fe 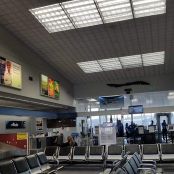 Due to being a small facility, Pullman/Moscow Regional Airport does not include a duty-free area and does not have a cafe or restaurant in the terminal.

Pullman–Moscow Regional Airport located in the northwest United States, can be found in Whitman County, Washington, four miles (6 km) west of Moscow, Idaho and about two miles (3 kilometers) east of Pullman. The property can be accessed by spurs from State Route 270 and includes a single 7,101-foot (2,164 m) runway, that is headed northeast/southwest (5/23), which entered service in October 2019. The previous runway (6/24) was 6,730 feet (2,051 m) and aligned with Moscow Mountain (4,983 feet (1,519 m)) approximately twelve miles (20 km) to the northeast, the highest summit in the area.

The airport situated in the Palouse region is the primary air link for its two land-grant universities, the University of Idaho in Moscow and the Washington State University in Pullman. Both universities use the facility for jet charters from Frontier Airlines, Alaska Airlines, and Allegiant Air for their athletic teams. Horizon Air, which (marketed and sold as Alaska Airlines) represents the only commercial airline that serves the property, by operating with Bombardier Q400 turboprop aircraft. It started limited service to Pullman–Moscow 38 years ago in 1981 with Fairchild F-27 aircraft (Friday & Sunday), and daily service (along with Lewiston) in 1983, on F-27 and Metroliner aircraft. Horizon Air offers four to five daily scheduled flights to Seattle/Tacoma. Previously, flight schedules have sometimes included a stop in Lewiston, but currently, all scheduled flights at PUW are operating nonstop to/from Seattle. Before Horizon, Cascade Airways (1969–1986) was the main carrier at the airport. Seattle air traffic control, located about 250 miles (400 km) west, is in charge of managing commercial traffic for PUW. The closest major airport is Spokane International, which can be found ninety miles (145 km) north. The FAA National Plan of Integrated Airport Systems categorized PUW as a non-hub primary commercial service facility.

For the one year ending 2014, PUW had 29,350 aircraft operations, which equals an average of 80 per day: 14% scheduled commercial, 85% general aviation, 1% air taxi, and less than one percent of military aviation. The property has accepted Boeing 737 aircraft on Alaska Airlines charter flights a few times. In 2018, there were 71 aircraft based at PUW: 60 of them were single-engine, seven multi-engine, three jet, and one glider.