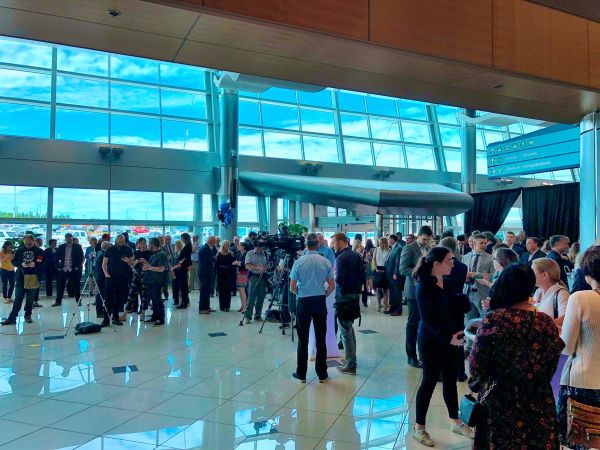 Checking In All airlines advise to complete check-in procedures online, but computer kiosks are also available inside the terminal building. Kiosks can be found at each customer service counter. Even though St. John’s International Airport is relatively small in size, passengers are not recommended to delay their arrival time too much by showing up for a flight. Commuters should allow themselves plenty of time to check-in and drop off their luggage. It is always advised to check and see if a flight is delayed or canceled before leaving the airport. St. John’s is frequently experiencing some extreme weather conditions (especially in the winter), and it’s one of the foggiest places in Newfoundland. New facility improvements will soon limit these inconveniences, but they represent an unfortunate reality of Eastern Canada travel. Pre-board Screening & Carry-on Luggage Security regulations administered by the Canadian Air Transp 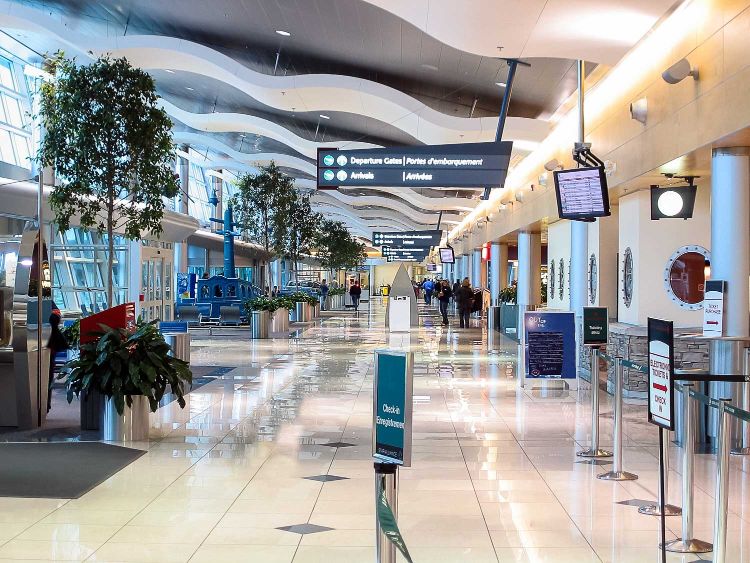 CBSA The Canada Border Services Agency is operating as a federal law enforcement bureau that is strived to implement immigration, border control (i.e., surveillance and protection), and customs services in Canada. Canada Border Services Agency is performing at YYT for controlling, securing, and managing borders of the country. CBSA agents are operating to make sure that all passengers who enter the country are eligible and comply with the laws and regulations in Canada. The organization is detaining travelers who may represent a potential threat and removes commuters who are deemed inadmissible to Canada. CBSA is also in charge of inspecting the goods and products that arrive at the borders to make sure that no illegal, prohibited or forbidden items enter the country. The officers are also responsible for ensuring that all applicable duties and taxes on the merchandise are collected.

The passenger terminal building at St. John’s International Airport is experiencing renovation and expansion works up until 2026. On the first level, when passengers enter the terminal, they will see the check-in counters, followed by the Destinations Restaurant, ‘On the Fly,’ Tim Hortons & a Relay shop, opposite of it can be found the children’s play area. An ATM cash machine, with a stairway leading to departures, is available in front of the elevator. The Arrivals area can be found next to the stairway and houses the rental car desks. Across from it is located an internet kiosk and the Visitors Information Center. International Arrivals occupy the end of the terminal. On the second level of the terminal, commuters can find a children’s play area in the middle, a duty-free Relay shop to the left as well as an elevator, and the arrivals area to the right. Behind them are Security screening and an internet kios 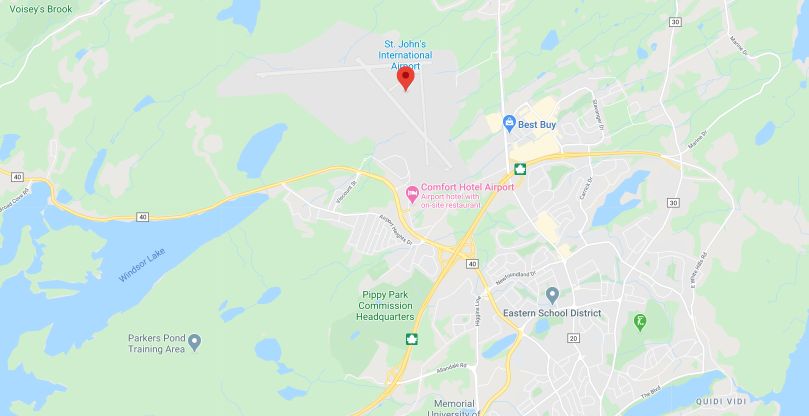 St. John’s International Airport represents the premier transportation gateway to Newfoundland and Labrador. The facility is conveniently located in the province’s capital city of St. John’s. The airport can be reached within less than 10 kilometers from the downtown core. The entrance to the Airport terminal is approximately 1 kilometer from the exit and entrance ramps to the highway. The precise address of the property is 100 World Pkwy, St. John’s, NL A1A 5T2, Canada.

Public Transportation The St. John’s Transportation Commission (Metrobus) offers public transit services to and from YYT to popular destinations in the St. John’s metro region, including Memorial University. Route 14 includes two pick-up and drop-off location spots at the airport – one can be reached near the arrivals area of the terminal building, and another is conveniently available on World Parkway near the Holiday Inn Express Hotel.

Taxis St. John’s International Airport operates a Closed Taxi Stand at the moment. City Wide Taxi represents the exclusive provider of ground transportation services for the travelers at St. John’s International Airport. Taxi cabs can be found queued outside of the Arrivals Area. A taxi dispatcher is available to assist passengers. Taxi prices are set for hotels and B&Bs. All other destinations are charged at the meter + $5. Taxis are waiting for commuters upon their arrival. Therefore, a premium rate is set so that riders can avail of immediate service. For arranging accessible taxi service, customers are required to contact at least 24 hours in advance Wheelway Transportation Limited at (709) 753-0605 or GoBus Accessible Transit at (709) 368-1620. Both agencies can accommodate large mobility aids.

The airport offers six car rental companies counters on-site to cover all of the passengers’ transportation needs. The airport recommends that commuters contact the car rental agencies directly in advance of their visit to ensure availability, especially in case of traveling during the peak tourism season (May through September). Avis Avis car hire desk is available at YYT. It welcomes passengers to proceed to the rental desk in the baggage claim area or the kiosk that can be reached in the parking garage for receiving their preprinted rental agreement and keys. In case commuters are interested in preferred service, they should have airline and flight information on the reservation. All rental vehicles are conveniently parked outside the baggage claim area. After-hours Returns are available at Avis for customers’ convenience. After parking and locking the car clients should place the completed contract and the keys in the Drop Box a 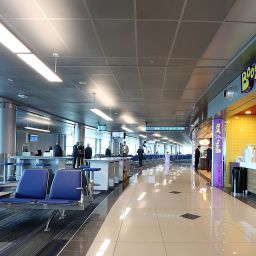 YYT believes an airport is so much more than a place where passengers rush in and dash out. It’s an integral part of the YYT mission to deliver an outstanding airport experience to passengers. The facility added the following to make travelers’ stay pleasant. Complimentary wireless Internet zones are available at the locations where commuters can sip a coffee and surf the net. Free charge stations for electronics are conveniently located in the departures lounge. Two CIBC bank machines are available for passengers’ use in the Terminal Building. One can be accessed on the first floor in the atrium area (between the escalator and the Relay store), and the other can be found in the Departures Lounge (across from Gate 9) Visitor Information Centre A Visitor Information Centre (VIC) is conveniently placed in the arrivals area of the Terminal Building to assist passengers with finding accommodations, attractions, tours, and festival

St. John’s International Airport believes that every experience passengers have at the airport should be a great one – and that also involves parking. Whether travelers are catching a flight for a short business trip, coming to the airport for a drop-off/pick-up, or taking a family vacation, there are parking service options to meet every need. Cell Phone Parking Lot Cell Phone lot at the airport is complimentary and even includes free Wi-Fi. The lot is designed for visitors who are waiting for a call from arriving travelers. When passengers arrive, they can then proceed to the terminal. Gold Pass Parking Gold Pass Parking offers the ultimate time-saver option for frequent passengers. Conveniently located near the Arrivals Area of YYT terminal, the lot can be accessed with a swipe card. Monthly Fee at the lot is available for $120. Short-Term Parking The short-term lot is designed for the prompt “in and out” availability 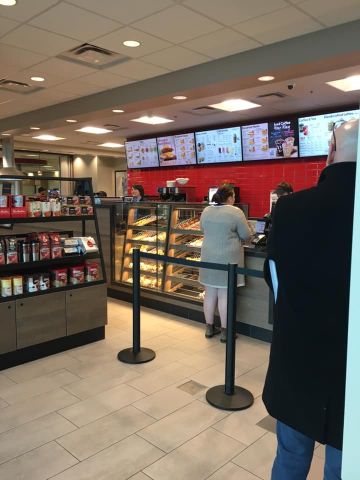 Tim Hortons Tim Hortons, which is accessible at the St. John’s International Airport, is welcoming passengers to visit and try out different options available at the menu of the facility. The cafe can be found at the first level of the terminal building, operating 24 hours a day, seven days a week. For receiving more detailed and, specific information passengers can contact Tim Hortons that can be reached on 709-552-5087. The facility can also be accessed at the second level of the terminal. However, commuters should remember about its operating hours from 03:30 am – 06:30 pm. Contact number is: 709-552-5086

The airport is categorized as an airport of entry by Nav Canada and includes the representatives of the Canada Border Services Agency (CBSA). CBSA agents at the facility can handle aircraft with no more than 165 passengers. However, CBSA can handle up to 450 if the aircraft is unloaded in stages

St. John’s International Airport Authority has spent $270 million to improve and enhance facilities at the airport since the property was privatized in 1998. The unprecedented increase in passenger volume experienced at the airport and the identified areas for improvements for the airfield has culminated in a $245 million investment aimed to develop facilities to accommodate the anticipated annual two million commuters by 2021. This 10-year Airport Improvement and Expansion Plan involves the installation of a Category III Instrument Landing System on the main runway as well as the runway end safety areas (RESAs) on both main tracks and the Expansion of the Terminal Building as it doubles its current size (387,000 square feet). Both runway activities have been finished and became operational in early 2016.

The Terminal Building was re-developed in 2002 and was extended to a total area of 175,000 square feet. The building was constructed to reflect the heritage, culture, and the vibrant new economy of the airport. Materials like Bell Island stone and maple are combined with glass and stainless steel to design a building that evokes a sense of pride in the community.

Not only is the terminal building beautiful, but it has also demonstrated to be very functional, especially in handling the unanticipated rise in passenger traffic. The three floors of the building include concessions, a large international area and arrivals, check-in areas, on the first floor, pre-board screening and departures lounge on the second floor, and Airport Authority and tenant offices on the third floor. Eight aircraft gates are available at the Terminal Building, and five of them include passenger bridges.

The most comprehensive project included in the new Plan represents the completion of the expansion to the Terminal Building. The first phase of the extension started in 2014. This project resulted in an additional 145,000 square feet included in the three levels of the east end of the building. It significantly expanded the range of passenger services while developing the operational performance for the airlines and the agencies operating within the terminal. The second phase of the Airport Terminal Building expansion started in 2018 and is planned to be completed in 2021. The constructions will add a further 72,000 square feet to the west end of the current building that will support the facilities and services needed for arriving passengers and aircraft. The total area of the Airport Terminal Building should double in size when finished and will be able to accommodate about two million annual passengers, a milestone that is expected to be achieved during the 10-year planning horizon.