Newcastle International Airport represents the 11th busiest Airport in the U.K. and the second busiest in Northern England after Manchester Airport, annually handling over 5.4 million passengers.

Check-In Check-in times differ depending on the airline and destination. For more specific details, passengers should check the information by contacting the airline or tour operator for advice. Some airlines, including KLM, Air France, British Airways, and EasyJet, have online check-in amenities. Passengers are strongly recommended to check-in at the airport at least three hours before a charter flight and about two hours before a scheduled flight. Baggage Advice Newcastle International Airport urges all travelers to follow our luggage policy for a smooth check-in and to minimize security risks. Commuters should consider the following information: Travelers must pack all their bags themselves and not allow anyone to tamper with them or take gifts on behalf of others. Commuters should make sure that all their bags are clearly labeled with names as well as the destination address. Never leave baggage or any of the personal belongings unattended 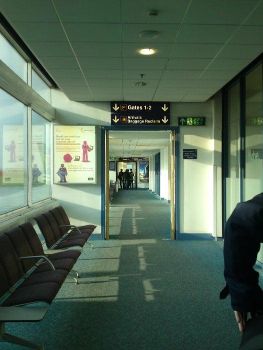 When passengers arrive at the Newcastle International Airport, they can proceed to the baggage claim area to find all of their belongings. The luggage can be conveniently located at the baggage claim area. After picking up their bags, commuters are free to leave the facility wherever it is comfortable for them. 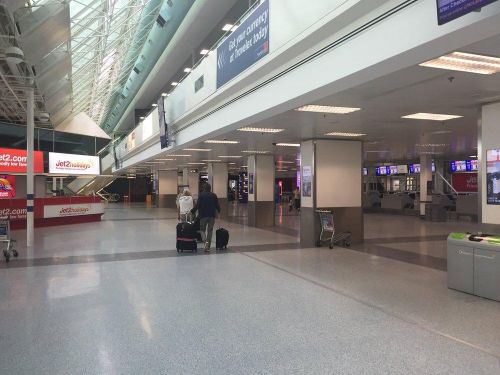 Newcastle International Airport (NCL) consists of a single passenger terminal that is equipped with many amenities and services. The facility is relatively modern, and the terminal can be described as pleasant and bright. In 2003 it had an expansion on the terminal building, which was finished in mid-2004 for passengers to pass through each day. The Airport Police regularly patrols around the terminal. 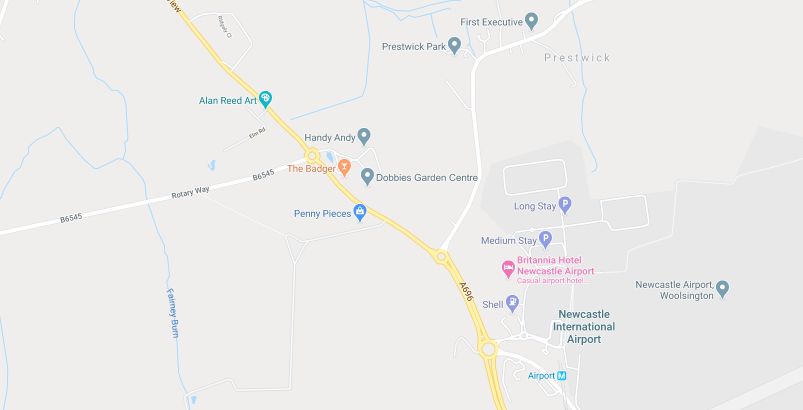 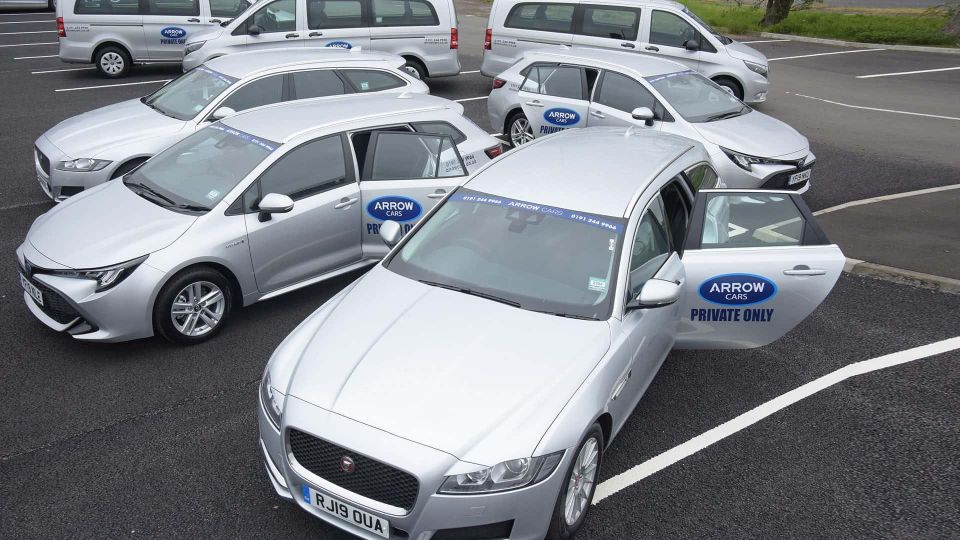 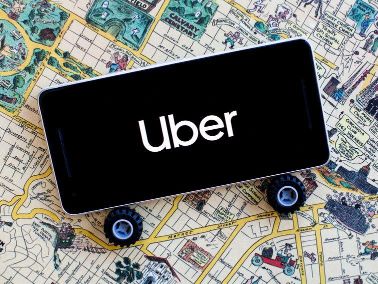 Uber Whether passengers are taking a trip from Newcastle Airport to the city center or from Newcastle station to NCL, they can count on Uber to get them to the desired destination. Uber is accessible at Newcastle Airport, so passengers can enjoy a convenient and comfortable trip to wherever they travel. Pick-up locations at the Airport can vary, so customers should make sure to check the app after requesting a ride. Whenever ready, commuters should open their app and feel free to request a ride by choosing the option that fits group size and luggage needs. Directions about pick-up points can be found directly in the app. Signs can also be available at NCL. Going to the assigned pick up location as specified by the app, passengers should note that it may not always be at the nearest exit. In case of not being able to find the driver, it is possible to contact him through the app. Uber rates to as well as from Newcastle Airport, may be affected b

Several popular car rental agencies are offering their services at Newcastle International Airport. Passengers can find Hertz, Avis, Budget, and Europcar representatives at the facility. Europcar The rental desk is located in the Domestic Arrivals Terminal. To return the vehicle, passengers should follow the signs that will lead them to car rental returns, find a bay marked as Europcar, and park up. Keys should be returned to the agency’s cabin and enough time provided for the vehicle to be checked over. Friendly service, new cars, as well as low prices, are all part of the company’s everyday offer. Whether someone is hiring a car for business or pleasure or needs a car or van, Europcar is capable of providing the right hire car at Newcastle Airport. Europcar is looking forward to serving travelers at its car hire branch: Newcastle International Airport. Customers should always remember to bring their driving license, valid credit ca 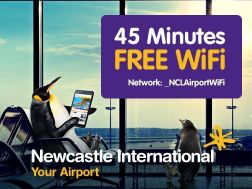 British Airways Lounge The British Airways lounge is signed throughout passenger’s travel through the departure lounge. The luxurious room can be found downstairs in the departure lounge. The room is accessible to all British Airways full-fare ticket holders, Gold or Silver cards, Executive Club passengers holding Premier, franchise partner airlines, and One World Partner airlines. The lounge is perfect for business travelers, offering a business center with internet access, phone and fax facilities. The lounge has a very peaceful, relaxing ambiance with a coffee bar offering light snacks, spirits, beers, and wines. There is also a little library and television. Smoking Areas Smoking, as well as smoking of e-cigarettes, is not permitted anywhere within the terminal building. Before security Designated smoking shelters are accessible to the front of the terminal building. For the comfort of others, customers should use the areas provided. A 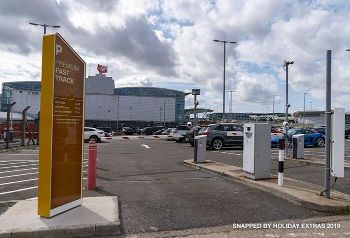 Short Stay The Short Stay 1 car park can be directly opposite the terminal building and offers comfortable and secure parking from several hours to a few days. The Short Stay 2 parking is located just a short walk from airport check-in. Commuters should proceed on foot to the terminal. Upon arrival at Short Stay 1 & 2, take a ticket at the entry barrier. The ANPR camera system will recognize registration. From here, simply passengers should park up and make the short walk to the facility check-in. Customers have to make sure they keep their car park entry ticket in a secure place as they will need it on return to assist their exit. After returning and locating a vehicle, travelers must proceed to the exit barrier. Insert their car park ticket into the exit ticket machine. The vehicle park system will recognize the details of the car, and the gate will open. In case of having any difficulties, commuters should press the help button that can 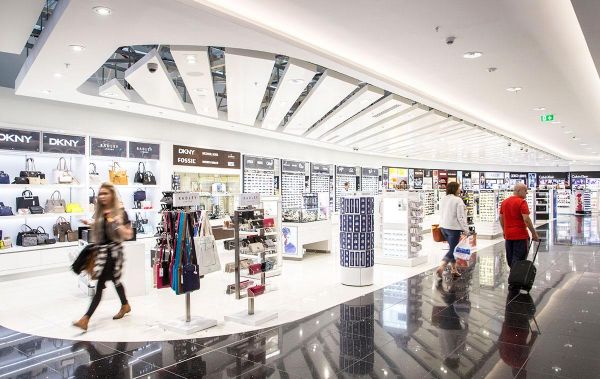 World Duty-Free Group shops offer the ultimate airport shopping experience. As the leading travel retailer in the United Kingdom, the company provides an unparalleled selection of premium products, from confectionery to cosmetics, fashion accessories to fragrances, spirits to souvenirs, skincare to sunglasses, fine wines to fine foods, and champagne to tobacco and cigars. Passengers can find the latest products at great value prices. Whether they are jetting off to Boston for business or heading away on holiday to Barbados, World Duty-Free is the place to buy any of thousands of items at significant savings against the United Kingdom High Street prices.

Newcastle International Airport represents the 11th busiest Airport in the U.K. and the second busiest in Northern England after Manchester Airport, annually handling over 5.4 million passengers.

The facility was opened on 26 July 1935 as Woolsington Aerodrome by the Secretary of State for Air, Sir Phillip Cunliffe-Lister. Incorporating a hangar, clubhouse, workshops, fuel garage, and grass runway, it costs £35,000 to build. In the 1960s, a new runway was constructed, along with a new air traffic control tower and an apron. These additions were opened by the Prime Minister, Harold Wilson in 1967. In the 1970s, with travelers figures approaching one million annually, the Airport’s status was switched to Category B, which made it a regional international airport. In a couple of years, it was re-branded as Newcastle Airport. In the 1980s, further grants were invested in catering, check-in, and duty-free shops. In 1991, Airport Metro station started its operations, connecting the facility with Newcastle city center using the Tyne and Wear Metro complex.

In August 2004, refurbished and extended Departure Terminal was opened. The refurbishment included a 3,000 square meter extension with new cafes, shops, and 1,200 new seats for waiting travelers.

Rapid expansion in traffic has led to increasing commercial use of the south part of the Airport that was previously used for general aviation but is now used for mail, freight, and corporate flights. This is partly because of difficulties obtaining arrival and departure slots for light aircraft traffic, which require to be separated from larger aircraft to protect against wake turbulence. As an element of the Airport Master Plan, the south-side area is to be expanded with maintenance pieces of equipment, including new hangar and apron areas.

In 2007, it was announced that Emirates was to start a daily non-stop service to Dubai from the NCL. This service began on 7 September 2007 and was operating ever since.

In August 2016, United Airlines announced it’s the decision of discontinuing seasonal routes from Newark to Newcastle in 2017, citing economic reasons. Therefore Airport lost one of its two long-haul services. Emirates flies the other long-haul route to Dubai.

In 2017, it was declared that the Airport would be investing around £3 million on a terminal expansion project, which represented part of overall £20 million improvement plans running from 2016 to 2017. This plan included digital signage in the check-in areas alongside a new radar system and the installation of new flooring.