Leeds Bradford Airport can be found in Yeadon, in the City of Leeds Metropolitan District of West Yorkshire, England, about 11 kilometers (7 miles) northwest of the city center, and approximately 14 kilometers (9 miles) from Bradford city center. The facility offers services to Leeds and Bradford and the wider Yorkshire region, including Wakefield and York, and Harrogate, and is acknowledged to be the largest airport in Yorkshire. Previously LBA was in public ownership. However, in May 2007, it was purchased by Bridgepoint Capital for £145.5 million. Bridgepoint then sold it to AMP Capital. 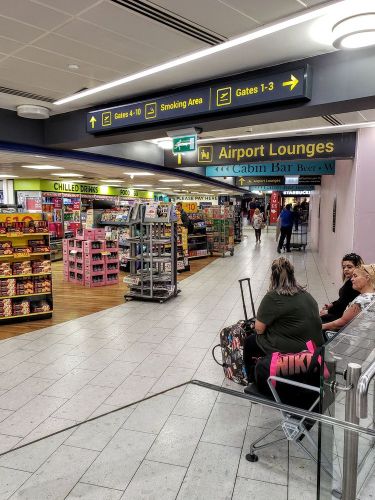 Entering the security area As passengers enter the security area, the boarding card is inspected, and travelers will be required to pass through to the passenger screening procedure. The responsibility of commuters is to make sure their boarding card is valid for travel and readable by the scanners. In case of checking in online and printing on paper, passengers should remember not to fold the paper across the barcode and make sure the print is undamaged and clear on good quality paper. Fast Track passengers can enter the security area by using the dedicated lane that can be found on the right-hand side of the entrance. Security Checks & Body Scanners LBA uses Security Body Scanning technology, in line with directions set out by the U.K. Department for Transport. Travelers are randomly picked for scanning or as a result of activation on a standard security check. On passing through the scanner (passengers should stand in the indicated spo 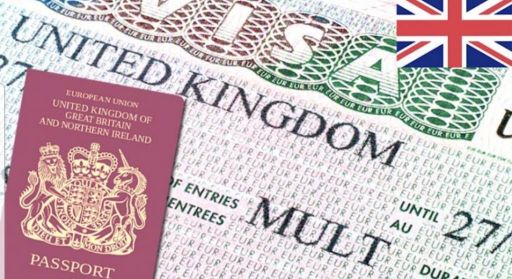 Border Force Once passengers landed at Leeds Bradford Airport, they will be required to pass through the passport control area. These procedures involve a check of the passport or identity card as well as evidence of travelers’ right to travel into the U.K. if required. U.K. Border Force manages the passport control area commuters are recommended to have their passport or identity card ready, removed from a holder or wallet, and have it open on the photo page. Passengers should remove their sunglasses or headwear and restrain from using any mobile device. Requiring a visa Passengers may be required to show a visa depending on their purpose for visiting the U.K., the country they have arrived from, and the duration of their stay. If travelers are unsure as to whether they require a visa to visit the U.K. or need one for traveling through the U.K., it is recommended to complete the online Border Force check. Baggage reclaim Checked luggage 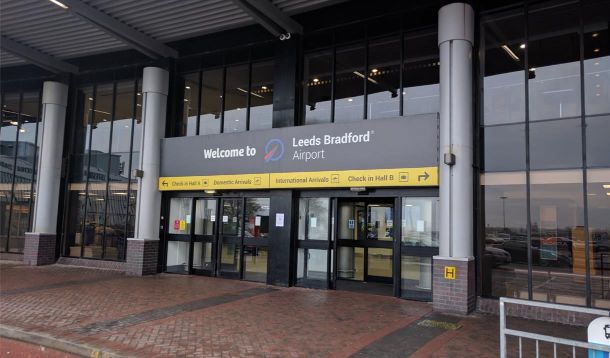 The recently upgraded passenger terminal includes ten airline gates that can accommodate up to 4.4 million passengers annually. It consists of a large departure lounge, new drink, and food establishments, a significant walk-through tax and duty-free area, as well as added retail concessions. The ground level for check-in and arrivals houses at its left end Check-In Hall A with desks A1-A26, Airport & Airline Info counters; domestic visitors in the center; followed by International Arrivals with nearby currency exchange Travelex, rental car desks, ATM cash machine, food & drink; and Check-In Hall B at the right end with check-in desks from B40 to B55 as well as an airline info counter. The first level designed for Departures includes a large departure lounge with a glass roof, - split into Check-in Halls A & B (A southeast, check-in B40-B55; B (west of the curve) with check-in A1-A17 and a baggage drop. Security checkpoints, food, a

Leeds Bradford Airport can be found in Yeadon, in the City of Leeds Metropolitan District of West Yorkshire, England, approximately 11 kilometers (7 miles) northwest of the city center, and about 14 kilometers (9 miles) from Bradford city center. The exact street address of the property is Whitehouse Ln, Yeadon, Leeds LS19 7TU, United Kingdom. 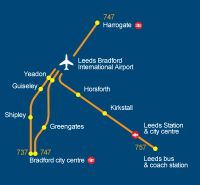 Taxi Arrow Cars represent an official taxi partner at the airport. The company operates a convenient taxi drop off and pick up service available on the terminal front at LBA. Wherever someone lives in the country, Arrow Cars is ready to transport passengers to and from the facility, and fares can be checked before booking. Four easy ways of booking a taxi are available: online through the website, by using an app, calling the 0113 258 5888 number, and making a reservation in-person at the arrow cars office that can be found on the terminal front. Passengers can use the touchscreen Kiosk also conveniently accessible at LBA. Arrow Cars offers private hire services as well. The office is located immediately outside the building on the right. Touchscreen kiosks offer passengers booking their Arrow Taxi easily and quickly outside International Arrivals. Exclusive drop off and pick up points for Arrow Cars’ customers can be found outside the ter 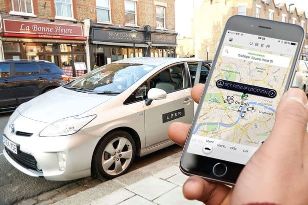 Whether someone is leaving Leeds Bradford Airport to Leeds or from Bradford to LBA, they can rely on Uber to get them there. Whenever passengers are ready, they can open their app to request a ride and select the option that suits their group size and baggage requirements. Users will receive information about directions and pick-up points in the app. Signs might also be available at the airport. Commuters should go to their assigned pick up location, which is specified by the app. However, essential is to remember that this location may not always be located at the nearest exit. In case passengers can’t find their driver, it is possible to contact them by using the app. Uber is available at Leeds Bradford Airport, so commuters are welcome to enjoy a convenient and comfortable trip to wherever they need to go. Pick-up locations can vary, so it is important to make sure to check the app after requesting a ride.

Getting to/from the terminal The complimentary 24/7 shuttle bus takes about four to five minutes, board at the bus stops that can be found on the terminal front by the entrance, or the access road adjacent to the Car Rental Centre. It is recommended to ask the bus driver to know if passengers would like to stop for car hire. Travelers can also make the journey on foot in approximately 15 minutes by following the walking route through the Mid Stay car park and past the One Hour Free Zone. The airport offers a variety of rental car options available from the following agencies at the on-site Car Rental Centre: Avis, Enterprise, Europcar, Hertz. After hours return If customers need to return their keys out of hours, simply deposit them in the relevant hire agency drop box at the Car Rental Centre. If passengers are interested in filling up on petrol before returning their car, the following petrol stations are within two miles of the airport: Mor 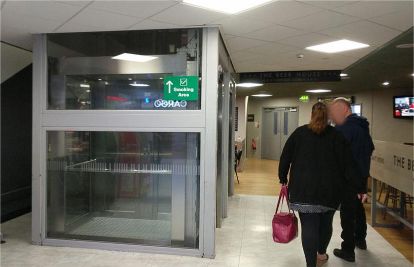 Travelex Currency and Banking If passengers need foreign currency for their travels or pounds sterling once they come back, Travelex offers convenient ATM and travel money services both before and after the security checkpoint in the terminal. Commuters can even buy their foreign currency online (up to 4 hours before U.S. Dollars and Euros) and simply collect it from one of the three stores in the airport. Purchasing from Travelex, passengers can take advantage of an Online Price Promise, 0% commission, and handy Travelex Money Cards. Travelex is available at the following times: Before security checkpoint 04:00 am until boarding of the last flight. After security checkpoint 04:00 am until boarding of the last flight daily. Cash machines are available 24/7. Before security, Cash Machines and Travelex are conveniently located on the ground floor next to International Arrivals. A second Travelex store can be found in Check-In Hall A near the e 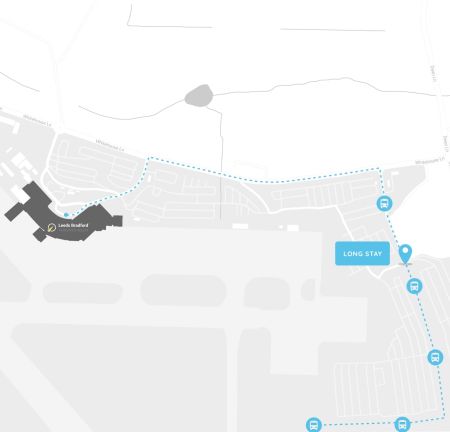 Viking Airport Parking After a vehicle scan from the camera system, passengers will leave their car in a drop-off lane for the trusted team to park for them. After leaving keys at the car park reception, a shuttle bus will take passengers over to the terminal. Travelers can free themselves from worry about having enough charge to get home by booking our electric charging points. The car park can be found on Warren House Lane, available off the main airport roundabout at LBA. The shuttle bus transfer takes approximately 2 minutes to reach the dedicated Viking Airport Parking stop. Commuters should note this is also where they will be picked up on their return journey. Short Stay To reach the area, passengers should follow the Short Stay car park signs from Whitehouse Lane. Upon entering the approach road, they should stay in the right-hand lane and proceed to follow the Short Stay signage. The Short Stay car park is accessible within a short w

Passengers can find World Duty Free available after security in first-floor departures. After passing through the area, commuters should follow the walkway straight ahead from the escalator. The daily operating hours are from the scheduled first departing flight until the boarding of the last flight. Brimming with top brands and offers on fashion, beauty, wines, treats, spirits, and fragrances; World Duty-Free represents a one-stop, high-street-beating store. It’s easy to get on board with exclusive skincare fragrances and make-up brands, many specialized cognacs and whiskeys, sunglasses, and watches, not always stocked on the high street. Passengers are welcome to take advantage of a shop now, collect on their return service while they are here or even more convenient, browse all the amazing products online before their trip, and click and collect online.

Leeds Bradford Airport can be found in Yeadon, in the City of Leeds Metropolitan District of West Yorkshire, England, about 11 kilometers (7 miles) northwest of the city center, and approximately 14 kilometers (9 miles) from Bradford city center. The facility offers services to Leeds and Bradford and the wider Yorkshire region, including Wakefield and York, and Harrogate, and is acknowledged to be the largest airport in Yorkshire. Previously LBA was in public ownership. However, in May 2007, it was purchased by Bridgepoint Capital for £145.5 million. Bridgepoint then sold it to AMP Capital.

Leeds Bradford officially opened on 17 October 1931. At the time, it was referred to as Leeds and Bradford Municipal Aerodrome or Yeadon Aerodrome; some of the locals call it Yeadon Airport to this day. Initially used for training purposes and general aviation early on, the first scheduled flights began on 8 April 1935. For accommodating passenger traffic, constructions started on the first terminal in the late 1930s. However, only the first wing was finished before World War II. British aircraft manufacturer Avro built a shadow factory to the north side of the aerodrome, which represented the most massive free-standing structure in Europe at that time. Avro produced around 5,515 aircraft before its closure in December 1946.

A new runway was opened in 1965. After Yeadon’s terminal building was destroyed in a fire, a necessary replacement was finished in 1968. In the early 1980s, the completion of the extension of runways was finally completed, which allowed it to be classified as a regional facility. On the same day as a runway extension was opened, Wardair started transatlantic flights to Toronto.

Further Concorde charter flights followed until 2000. In 1994, LBA operational hour limitations were removed, allowing flights at any time of day. Since 1996, the terminal has been significantly expanded in terms of facilities and size. In 2007, approximately 2.9 million passengers passed through the facility.