Aberdeen International Airport represents an international facility that is located at Dyce, a suburb of Aberdeen, Scotland, about 5.8 miles northwest of Aberdeen city center. Under 3.1 million passengers used ABZ in 2017, with an estimated increase of 4.6% compared with 2016.

Body scanner ABZ has introduced body scanners by the Department for Transport regulations relating to the screening of travelers. Keeping passengers safe represents the utmost priority for the airport. By introducing the new technology into Aberdeen, the facility can provide the best enhancements to the security procedures and serves as an accurate yet less intrusive searching method. For security reasons, passengers do not provide specific details of additional screening or selection; however, commuters can be confident that the selection process is not based upon gender, ethnic origin, or destination of travel. Body scanning needs the passenger to stand in a particular position within the scanner. The whole process takes less than 10 seconds without any physical sensation. If the scanner detects any dangerous items on the person, the security representative will conduct a further check. Some travelers may also be required to remove their shoe

Connecting passengers If someone is transferring between two international flights at Aberdeen, they may be able to have their baggage tagged through to their final destination. Passengers will still require to declare any items in their hand luggage, which are liable for duty. In case of connecting from an international flight to a U.K. flight, commuters must undergo Customs and Immigration procedures at Aberdeen. Immigration and passports After arriving at the Aberdeen International Airport, passengers should head towards passport control, which will be signposted on their arrival. There are two queues – one for British, European Economic Area (EEA), European Union (E.U.) and Swiss nationals, and a second for all other nationalities. At the passport counter, a U.K. Border Force representatives will ask passengers to show a passport or travel document and any supporting documentation that is necessary for a visit. For detailed informati 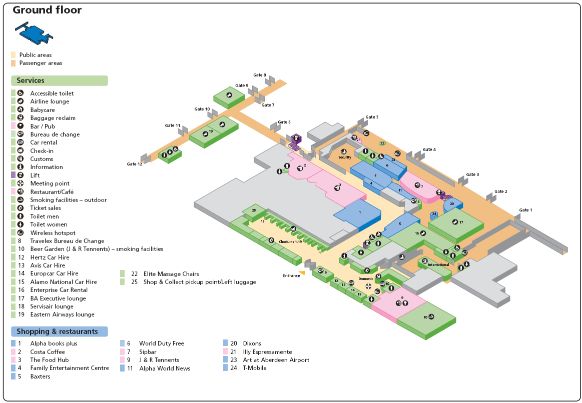 The main terminal of the airport starts operations at 03:30, or about two hours before the first scheduled departure, and closes after the last arrival. Overnight stays are not permitted at the terminal. Aberdeen International Airport includes the Main Terminal for charter and scheduled flights, as well as terminals for North Sea helicopter operations, and a little terminal (the Broomfield House), near the main terminal, worked for oil companies’ charters. The check-in area houses counter 1 - 20 and 21-24, as well as the restaurant, WHSmith, coffee shop, and internet kiosk. After security checks, passengers arrive in the secure Departure area, which includes World Duty-Free stores, Travelex, food, and drinks, the waiting area, internet kiosk, and lounges. The area also has access to gates from 1 to five and a separate gateway to gates from 6 to 12 that can be reached via escalator or elevator. Services and amenities available inside the m

Aberdeen International Airport is conveniently situated at Dyce, a suburb of Aberdeen, Scotland, about 5.8 miles northwest of Aberdeen city center. The precise address of the property is Dyce, Aberdeen AB21 7DU, United Kingdom. 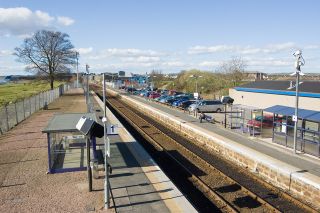 Bus Regular buses travel from ABZ to Aberdeen city center as well as other destinations. Services are less often in the evening and at weekends, so passengers are recommended to confirm bus times with the operator in advance. A bus journey to the center of Aberdeen takes approximately 30 minutes in average traffic, longer during peak times. Bus prices and timetables are subject to change, so commuters are urged to check with the relevant operator. Buses to Aberdeen and local services stop right outside ABZ. The bus stop is signposted from the terminal building. The station can be reached from the facility by taxi or bus. Coach operators at ABZ include Scottish Citylink, National Express and Megabus. Train The closest rail station to the airport is Dyce, which is approximately two miles away from the terminal and easily accessed by taxi. Dyce station belongs to the Aberdeen-Elgin-Inverness line and is served by some through trains from Edinburg 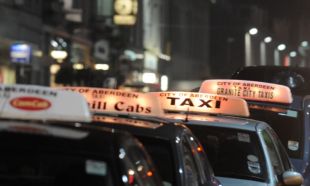 Taxi Official ABZ taxis are accessible right outside the front of the terminal. Commuters should turn left for the taxi rank where they will find Forecourt Coordinator, who will assist them with their onward journey. Passengers are welcome to use the Official on-site pre-book office to book their return trip again to the facility with the dedicated official airport fleet. Travelers will be Guaranteed with the best value airport taxis. When arriving at the airport, passengers can follow the signs for Pre Book Taxi Office and reach the counter where friendly staff assists with all journeys. Drivers Aberdeen International Airport includes a dedicated fleet of drivers and cars to service the needs of the 1.5 million-plus passengers who arrive into ABZ per annum. Drivers are all licensed by Aberdeen City Council and follow a strict code of conduct. If travelers are interested in joining the busy fleet, they can contact Stewart Duncan by writing an e

Alamo Rent A Car Alamo car rental offers low rental prices and hassle-free customer experience. With locations throughout Canada, Mexico, the U.S., Asia, Europe, Latin America, and the Caribbean, Alamo provides a variety of convenient car rental service for airport leisure travelers. Avis For passengers who are interested in renting a car at a great price while receiving unbeatable service, they are welcome to book Avis online and rent at one of the convenient airport locations. Hertz Travelers can start their journey with Hertz on any day. It is possible to book the preferred car online for a great value. Friendly, professional Hertz representative at the counter is ready to assist commuters with the necessary information and rental procedures. National Passengers interested in a particular car hire offer can save up to 10% on already competitive Web rates by renting a car with National. Sixt Sixt Car Hire at Aberdeen Airport can get commut

Wireless internet access Passengers can enjoy complimentary high-speed wireless internet access via their laptop computer or handheld device at ABZ. Passengers will need a wireless compatible (WiFi 802.11n) device. Most portable devices include this function, as well as many others, and can be upgraded with a wireless networking card (travelers can purchase these at the facility). Complimentary wireless Internet access at ABZ is offered in partnership with B.T. Lost property In case commuters dropped any of their belongings, they should report it by using the email or visiting the lost property office located within the check-in area. In case an item is found, a member of the team will reach out to the owner. A charge of £8 per item is made for the retrieval of lost belongings, and for reclaiming it, passengers will be required to show identification in the form of a driving license or a passport. The item will be stored in the short term 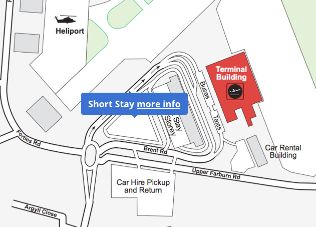 Long Stay car park The airport offers commuters the service of amending their booking right up to the day of travel. Long Stay car park is within several minutes from the terminal building, with a courtesy bus provided to and from the car park on demand. Long Stay parking includes frequent patrols, 24-hour staffing, and CCTV monitoring. Passengers can also be dropped off for free at the Long Stay car park if this is done within thirty minutes. Travelers can use the Long Stay bus for free to get to the terminal building. The area is signposted on the approach to the facility. If someone is using a satellite navigation system, the airport’s postcode is AB21 7DU. Short Stay car park The short-stay parking area is near the terminal. Passengers are welcome to park in the 500-space multi-story car park available at the airport. It is possible to book in advance to receive the best prices, or park in the Priority spaces seconds from the entranc

A fantastic selection of products from souvenirs to spirits, confectionery to cosmetics, fashion to fragrances, sunglasses to skincare, fine wines to fine foods, and champagne to tobacco is available at the airport. World Duty-Free, accessible immediately after the security checkpoint, is the place to purchase any of thousands of products at significant savings against U.K. high street prices. Passengers can also use shopping collection service to leave some of their carryings and then pick it up after return. Whether someone is looking for the latest fragrance or something unique, Duty-Free at LBA offers the perfect treat or gift for someone else. Returns Process If someone is not happy with the item they have purchased, the returns offer means they can send the item back as long as it is returned within 60 days from the date of purchase. In case, items are in the same, unused condition as when they were sold, they can return them to within 60

Aberdeen International Airport represents an international facility that is located at Dyce, a suburb of Aberdeen, Scotland, about 5.8 miles northwest of Aberdeen city center. Under 3.1 million passengers used ABZ in 2017, with an estimated increase of 4.6% compared with 2016.

ABZ is operated and owned by AGS Airports, which also operated and owned Southampton and Glasgow facilities. It was previously worked and owned by Heathrow Airport Holdings (formerly known as BAA). Aberdeen International Airport serves as a base for Loganair and Eastern Airways. The property also provides services of the main heliport for the Scottish offshore oil business. By using newer aircraft, helicopters can reach northernmost platforms on both the west and east of Shetland areas. Helicopters also sometimes use Kirkwall, Scatsta, Wick, and Sumburgh for refueling stops.

Aberdeen International Airport officially opened in 1934 and, with the discovery of North Sea oil in 1967, soon became an essential center for helicopter operations linking oil rigs to the mainland, as well as leisure and business flights.

In 1939 the facility was taken over by RAF and some local trips mostly to Northern Isles, followed by gradual post-war development of scheduled services until the arrival of the oil industry.

£10 million invested, and a new passenger terminal was opened in 1977.