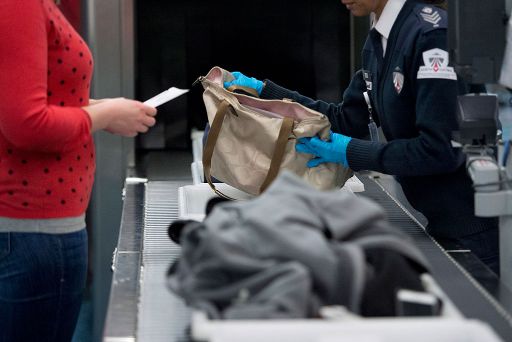 Canadian Air Transport Security Authority (CATSA) The facility is working with the Canadian Air Transport Security Authority (CATSA) to ensure maintenance and compliance with established airport security standards. The primary purpose of these joined efforts is the goal of increasing the safety of commuters. CATSA is installing specialized airport security devices and improving operation space to meet the goal. CATSA is active since 2002 and is currently considered to be a Crown organization that is liable for providing, maintaining, and managing productive and regular screening services across different Canadian airports, including Greater Moncton Roméo LeBlanc International Airport. The group is dedicated to keeping its actions in full agreement with the installed safety and security standards. 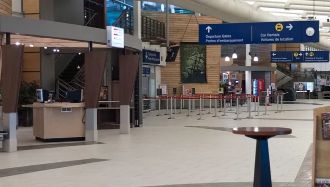 Baggage Claim The baggage claim area at Greater Moncton Roméo LeBlanc International Airport is located before security. In case of not finding luggage when arriving at the airport, commuters should proceed to one of the airline baggage service centers, which is conveniently available in the baggage claim area. Canada Border Services Agency (CBSA) Canada Border Services Agency is performing at YQM airport to control, manage, and secure the border of the country. Agents are working to ensure that all passengers who arrive in Canada comply with the regulations established in the country. By operating at the airport, CBSA representatives are detaining people who may contain a potential threat. Agents are also working to remove travelers who are considered inadmissible to Canada. By inspecting the products that arrive at Canada's borders, CBSA officers are making sure that no illegal items enter the country, and all applicable duties and

The passenger terminal at Greater Moncton International Airport is a new state-of-the-art 85,000 sq.ft. The construction and design were inspired by the charm of the New Brunswick region, its Hopewell Cape Rocks, and its residents, known for their hospitality and warmth. After security checkpoint, gates 1 and 2 are located to the left, and gates 3 and 4 available from the right side. The Mezzanine level includes the administration offices and an observation deck. The information counter can be found in the center of the main level. Services and amenities available at the airport include complimentary internet access, four departure gates, 22 check-in counters, a passenger lounge, a duty-free kiosk, retail shopping, ATM, a food court (at both pre and post-security areas of the main level), and five TTY phones. A cocktail lounge, newsstands, Customs and Immigration facilities, a tourist Information Board, and St.Thomas Seafood, where passengers ca 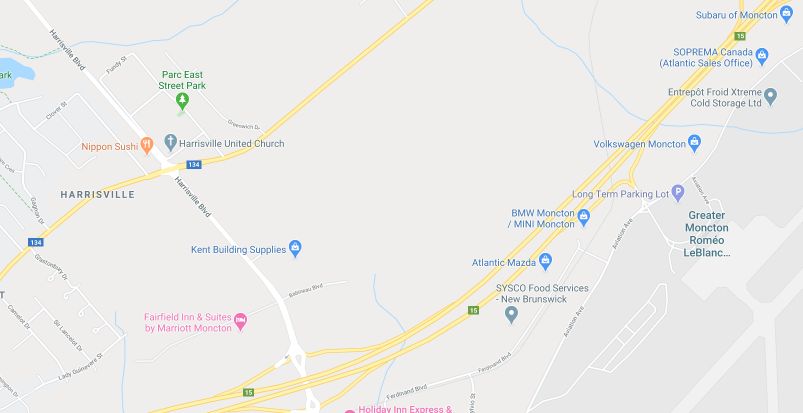 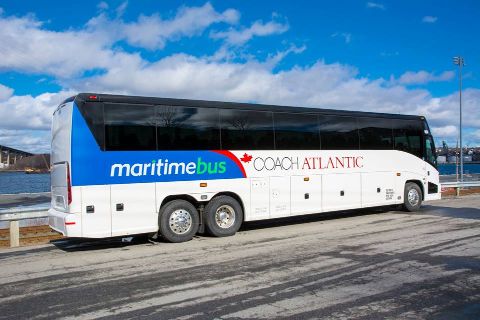 Whether passengers simply need a ride to their home, hotel, business destination, or more long-term transportation during their stay in the area, several companies provide the Airport (YQM) with services for transportation needs of travelers. Bus Services Maritime Bus is available to pick-up and drop-off commuters at the facility with prior notice upon buying a ticket. Every day, except Christmas Day, Maritime Bus operates about 10,000 kilometers offering affordable service to the three Maritime Provinces of New Brunswick, Nova Scotia, and Prince Edward Island, with connecting service to any location in Canada. Maritime Bus provides reservation-based services. By buying a Maritime Bus ticket, passengers may reserve their seat for traveling from one of the many departure points for a specific route, date, and departure time. Travelers should not worry about overbooked buses or getting a seat to make it to their destination. Reserving a Maritime B 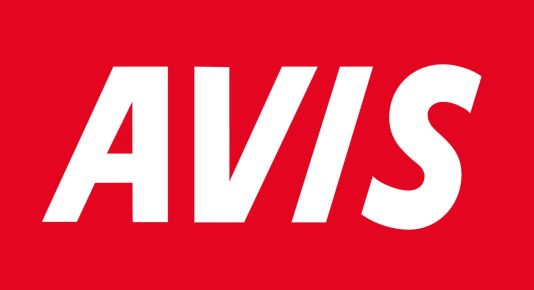 Taxi Metered taxi services are available to and from the Greater Moncton Roméo International Airport. Taxis are located outside the terminal building, adjacent to the arrival doors. Air Cab was established in Moncton, New Brunswick, and has increased to become the city's largest taxi provider with over 120 cars operating throughout the area. The agency is committed to growing across Atlantic Canada by offering professional and reliable service. If passengers are coming from out of town, they can use the toll-free number indicated below or use the convenient app ​to book their cab. Contact number: 1-8​88-461-0077 ​ Taxi app The app makes ​booking a cab convenient and straightforward. By downloading an app for both Apple​ and ​Android devices, customers can ​order a taxi from anywhere, anytime.​ The app is complimentary to download and always free to use. White Cab With many years of ex 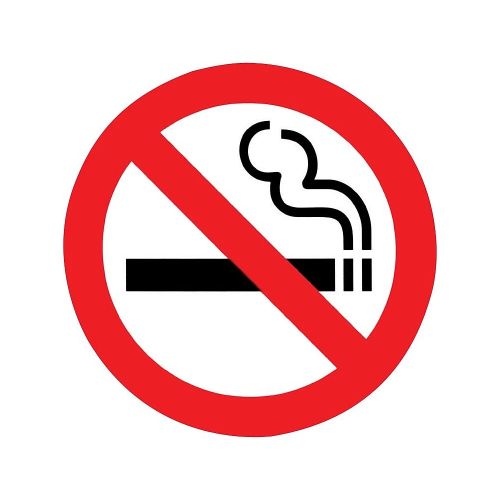 Wi-Fi The airport is pleased to offer all of our travelers and guests complimentary Wi-Fi access throughout the terminal. Computer data ports also can be accessed on telephones situated next to the car rental counters and in the pre-boarding area. There are also several integrated ports in the seating post-security and on the mezzanine. Boardroom The YQM provides boardroom space for meetings of up to 25 people at the Airport Operations Facility conveniently located at 225 Lieutenant-Colonel Rob Lane (next to the main terminal building). The room can be accessed for a full day for $200. For reservations or any additional information, commuters can contact the airport administration office at (506) 856-5444 between 08:00 am and 04:00 pm (Atlantic time). Kids Play Area After security If passengers are traveling with children, they can come and see the Club YQM Kids play area conveniently located in post-security by gates 3 and 4. The kid’s ar

Parking The Greater Moncton Roméo LeBlanc Airport (YQM) provides a variety of parking facilities to meet their needs. All lots are security patrolled and operate 24 hours. Short-term Parking The short-term parking lot at the Greater Moncton Roméo LeBlanc International Airport (YQM) is located in front of the airport entrance. Parking prices are $4.00 per hour ($2.00 per 30 minutes or part thereof). The first 15 minutes of parking are complimentary. Commuters should validate at one of the outside kiosks. Normal parking rates apply after 15 minutes. Travelers are welcome to save time by paying for parking at one of the pay stations conveniently located at the short-term parking entrance area inside the building. By simply bringing a ticket with and paying as passengers leave the facility. The pay stations accept cash, debit, or credit cards. It is also possible to pay at the exit gates when exiting the parking lot. However, traveler

Bistro Altitude available after the security checkpoint offers an assortment of freshly made artisanal wraps, sandwiches, and pizzas, as well as appetizers and grab-and-go options that include fresh fruits, snacks, salads, and cold beverages. Tim Hortons is conveniently located before as well as after the security checkpoint. Passengers are welcomed to visit and try out Canada’s favorite coffee and baked goods offered at the menu. The facility can be found centrally located on the main level of the airport terminal.

The property is classified as a facility of entry by Nav Canada and is staffed by the Canada Border Services Agency (CBSA) representatives. CBSA agents at YQM currently can handle aircraft with up to 300 commuters.

On January 11, 1928, the very first scheduled air flight out of the Greater Moncton area occurred. Both sites were considered for the first airstrip. Leger's Corner was selected due to the more favorable lending conditions. Part of the property was donated to the city of Moncton by Simon B. LeBlanc of Leger's Corner, a landowner, developer, and owner of the LeBlanc general store and post office conveniently located on the south corner of the currently named streets of Acadie Ave and Champlain St.

In 1929, a local private organization purchased the land at Léger's Corner airstrip, and through the years, two runways were built together with structures for aircraft maintenance. In the same year, the Moncton Aero Club was established, as was the International Airways Flying School. These later grew into the Moncton Flight College, one of the pre-eminent flight schools in the country. Also, in the same year, the facility expanded its airmail service to include Montreal and Prince Edward Island.

In 1936, the local government and Transport Canada discussed the chance of the construction of a facility suitable for trans-Canadian routes. The Léger's Corner place was unsuitable for expansion, and instead, it was decided to choose a site situated nearby Lakeburn as the new location for the airport. Two additional dirt landing strips and a paved runway were constructed.

In 1940, the Department of National Defence started a No. 8 Service Flying Training School(SFTF) at the recently developed RCAF Station Moncton under the auspices of the British Commonwealth Air Training Plan. The school instructed war pilots for the Commonwealth countries. A new hangar was constructed at YQM during the war to serve as a maintenance and repair facility.

During the 1940s, civilian air services developed and became available serving Halifax, Montreal, Sydney, Charlottetown, Fredericton, Saint John, and Newfoundland. The hangar of Trans-Canada Airlines (later renamed to Air Canada), became the spot for the first air terminal. In 1952, a more extensive hangar was converted into a modern air terminal, but it was very soon after that destroyed by fire. In 1953, a replacement air terminal was built.

Further expansion in 1964 caused many changes to the facility, including an air traffic control tower as well as a new operations building. In 1976, the air terminal was again extended.

Throughout the years, a lot of improvements and renovations were performed to the air terminal building, including in 1998-99, an international arrivals section to suit the requirements of 1999's eighth Sommet de la Francophonie. A spacious landing apron was constructed at the same time on the opposite side of the property in a location that would later grow into the site of the new international airport terminal.

In 2001, the new, state-of-the-art international air terminal was finished and officially opened in 2002 by Queen Elizabeth II. The Greater International Airport is currently the busiest in New Brunswick, by providing services to more than 552,629 passengers annually.

Both Purolator Courier and FedEx Express also have huge hangars at the airport.