Sumburgh Airport codes are IATA: LSI, and ICAO: EGPB. The LSI airport is the leading public-use airport situated in the United Kingdom, which serves the region of Shetland in Scotland. Sumburgh Airport is located just on the southern area of the mainland, in the parish of Dunrossness. It is within 17 NM (31 km; 20 mi) ate the south of Lerwick. Highlands and Islands Airports Limited, shortly referred to as HIAL, owns the Sumburgh Airport.

Getting at Sumburgh Airport Passengers of LSI airport are recommended to allow enough time to get ready to the airport, to let time to park their car, get into the main terminal, and get ready for check-in and security procedures. Generally, passengers should arrive approximately one hour before their scheduled departure time for domestic flights within the UK, and around two hours before for European flights. Sumburgh Airport Security Sumburgh Airport security is managed and controlled by the Airport Management Services Ltd (shortly referred to as AMSL). All passengers and air travelers of Sumburgh Airport must be aware that the Department for Transport has set specific rules for traveling through LSI airport to various destinations. Hence, all passengers are required to follow the instructions and rules that work at the airport. Security Checkpoint At security checkpoints, all passengers will be asked by security staff to remove the coat, ja 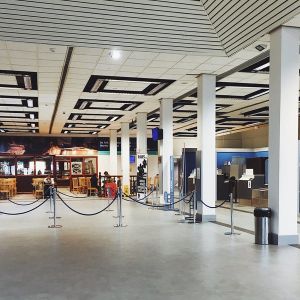 All newly arrived passengers are directed at the LSI airport’s Arrivals Lounge. Once passengers arrive at Sumburgh Airport, they should go-ahead to the baggage claim area, or exit and get to the ground transportation area. 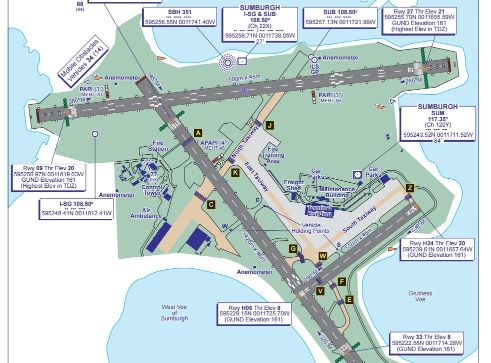 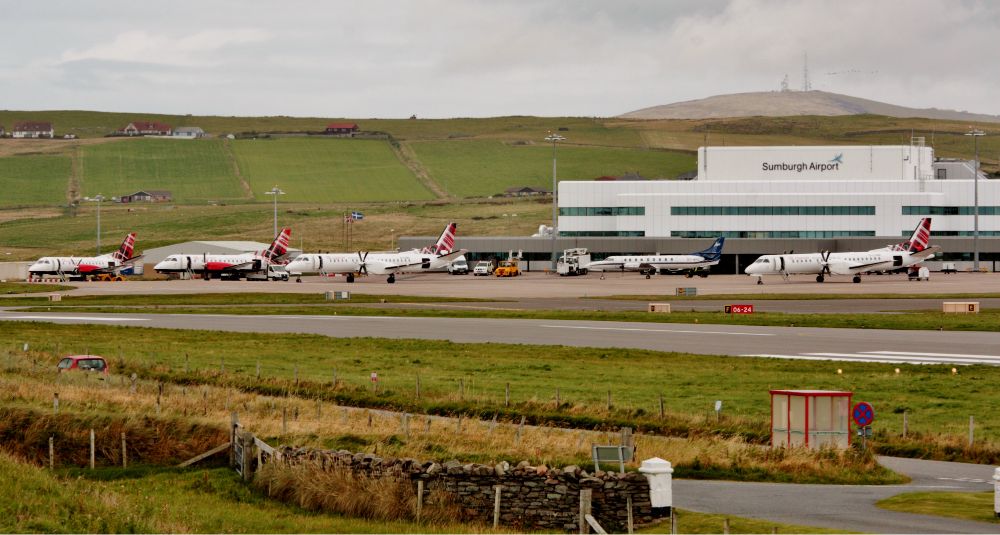 Sumburgh Airport is the main leading airport in the United Kingdom, which serves Shetland. The LSI airport is situated approximately 25 miles in the south from the main town-port of Lerwick. LSI provides air links to major cities of Scotland, such as Orkney and Norway. The precise postal address of LSI is Virkie, Shetland ZE3 9JP, in the United Kingdom.

Bus Service At Sumburgh, Airport passengers can get access to public transport. At LSI, a regular airport bus operates rides. LSI Airport bus takes passengers to the region of Lerwick in just 40 minutes. Bus Route 6 commutes between Lerwick and Sumburgh Airport, operated via Sandwick. The public transport bus service lines are provided by John Least & Sons company, which contains all accessible buses, with a low floor for wheelchair customers. For more information regarding service, schedules, ticket fees, and payment options, passengers are recommended to contact John Leask & Sons on 01565 693 162. 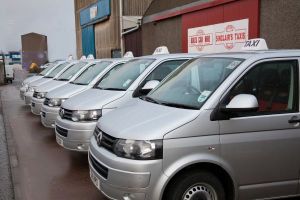 Taxi Service At Sumburgh Airport, passengers can use local taxis to get to and from the LSI airport or get around the region. Taxi service can be reserved in advance upon arrival at the LSI airport, or passengers can contact LSI taxi provides in advance on their arrival at the airport's main terminal building. Passengers should be aware that taxi cabs are subject to availability. Taxi Providers At Sumburgh Airport, following taxi providers offer transfer services from the airport to various destinations: Boddam Cabs Passengers can contact Boddam Cabs taxi service company at 01950 460 111, or contact via their official email at Sandra@boddamcabs.co.uk . Boddam Cabs provide minibus that accommodates eight people. J & I Taxis Passengers can contact J & I Taxis at 01950 422 207, or contact through the company’s email address at bookings@janditaxis.com , to get more detailed information about service, schedules, and offers of the t 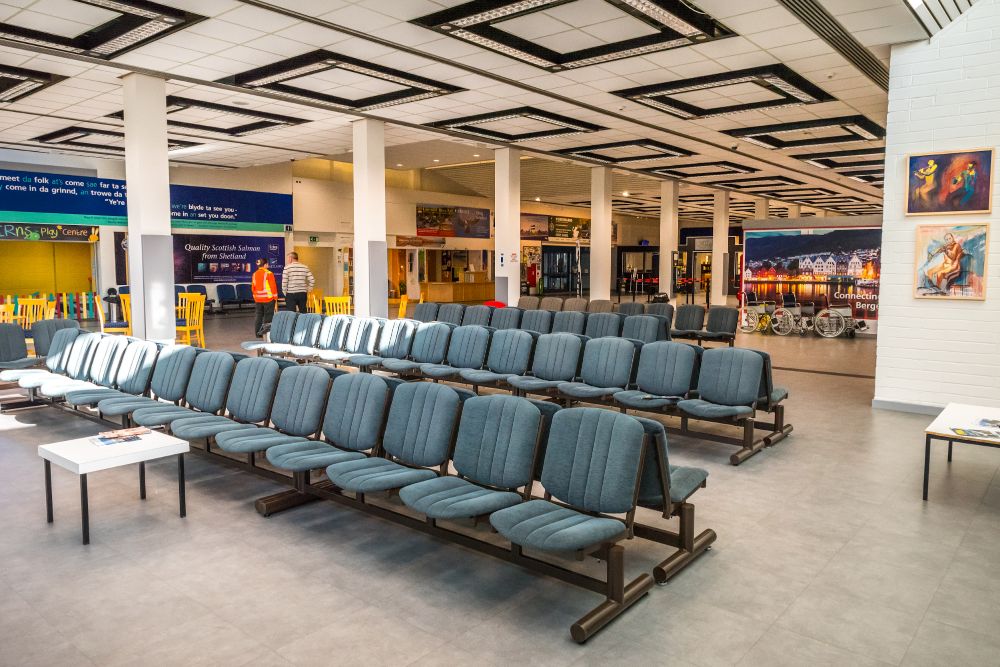 Facilities for Persons with Disabilities Sumburgh Airport assists persons with reduced mobility, disabilities, or other medical conditions who require any need or assistance throughout the airport. Passengers with disabilities are advised to make arrangements before arrival via their airline. LSI airport facilities include accessible toilets, wheelchairs, ambulant, ramp Facilities, disabled Parking Bays, as well as pick-up and drop-off zones. 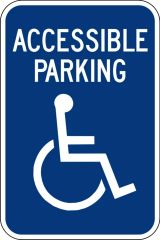 Parking Information Sumburgh Airport provides parking services and spaces available for everyone coming to LSI airport, no matter if its passenger, visitor, or pick-up driver. At LSI airport, there are specially marked and designated areas for pick-up and drop-off spots, just next to the LSI airport's main terminal entrance. Vehicle drivers must be aware that pick-up and drop-off areas must always be kept clear for ground transportation, such as buses, taxis, and even for emergency vehicles only. Hence, drivers should look for the dedicated stop areas to quickly pick-up or drop-off passengers at LSI airport. Short and Long-term Parking Lots Short and Long-long term parking lots are located in the closest area to the LSI airport's main terminal building. Parking Rates The daily rate for on-site airport parking is around £3 per day. Besides, there is a free drop-off period admission, but only for 2 hours. Parking Payment Methods Whe 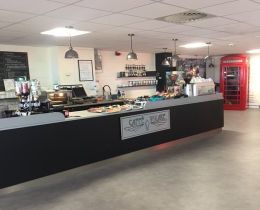 Duty-Free Passengers at Sumburgh Airport from a country that is situated within the EU are allowed to bring an unlimited amount of goods from the duty-free stores, bought in EU countries if the price they paid included tax and if the products are for their personal use. Limits on Duty-Free Store Passengers from EU country should meet the following restrictions while shopping at the duty-free store, more preciously, passengers are allowed to buy: Buy 800 cigarettes, 200 cigars, 1 kg tobacco. Buy 110 liters of beer. Buy 90 liters of wine. Buy 10 liters of spirits. Buy 20 liters of the fortified wine. Passengers outside EU: Buy 200 cigarettes, 100 cigarillos, 50 cigars, 250g tobacco. Four liters of still wine. Buy One liter of alcohol over 22%. Buy 16 liters of beer. Pay up to £390 for other goods. Caffé Volare Caffé Volare is one of the Shetland’s Italian-style coffee bar and bistro, which is located in the departures

Sumburgh Airport codes are IATA: LSI, and ICAO: EGPB. The LSI airport is the leading public-use airport situated in the United Kingdom, which serves the region of Shetland in Scotland. Sumburgh Airport is located just on the southern area of the mainland, in the parish of Dunrossness. It is within 17 NM (31 km; 20 mi) ate the south of Lerwick. Highlands and Islands Airports Limited, shortly referred to as HIAL, owns the Sumburgh Airport.

The history of Sumburgh Airport links and the field strips were examined and laid out by Captain E. E. Fresson, yet in 1936. On June 3, RAF Sumburgh Airport was first opened in 1926 with the inaugural flight right from Aberdeen, Kintore, operated by the De Havilland Dragon Rapide G-ACPN and piloted by Capitan E.E. Fresson himself. Due to the proximity of Sumburgh Head, as well as for the frequency of low fog and cloud, RAF Sumburgh Airport becomes one of those airfields, which had RDF facilities. The airport runways of LSI airport were built at the instigation of Captain Fresson. Fresson managed to prove to the Navy at Hatston, Orkney, to control all-round landing facilities during the winter months, airport runways were essential and urgent to build. Fresson's ideas were taken up by the RAF, once getting the success of the Hatston experiment.

The former RAF Sumburgh airfield included around three runways, two of which, were later extended, and remained in use by the present Sumburgh Airport. The longest runway of LSI airport was originally 800 yeard (estimated as 730 m), and the shorter runway occupied 600 yd (which is 550 m) from the shoreline to shoreline, at Sumburgh airfield. The airport is considered and often though to be unusual since its helicopter runway covers a 550 m (1,804 ft) as opposed to the usual helipad size. The western end of LSI airport runway is 09/27 and crosses the A970 road just right between Sumburgh (including the territory of the airport) and the northern mainland areas. The access to the field is controlled and managed by level crossing barriers which are closed whenever a flight takes off or lands at the Sumburgh Airport property.

According to Sumburgh Airport’s Annual Passenger Traffic, LSI airport served a maximum of 245,868 passengers in 2018. Besides, Sumburgh Airport had aircraft movements of around 16,628 activities.

British Airways and KLM airlines both operate direct flights to Sumburgh Airport in Shetland. One of the cheapest months for air travelers to fly to Sumburgh in Shetland is June. Besides, Direct flight and Longair operate flights and serve LSI airport passengers. Direct flights provide seasonal charters to Fair Isle, while Longair airlines commute between Sumburgh Airport to Aberdeen, Glasgow, Edinburgh, Kirkwall, and Inverness. Besides, Longair has seasonal flights to Bergen.