East Midlands Airport represents an international facility that can be found in the East Midlands close to the Castle Donington located in northwestern Leicestershire. The airfield was initially built to serve as a Royal Air Force station and was referred to at the time as RAF Castle Donington before being reconstructed as a civilian facility in 1965. 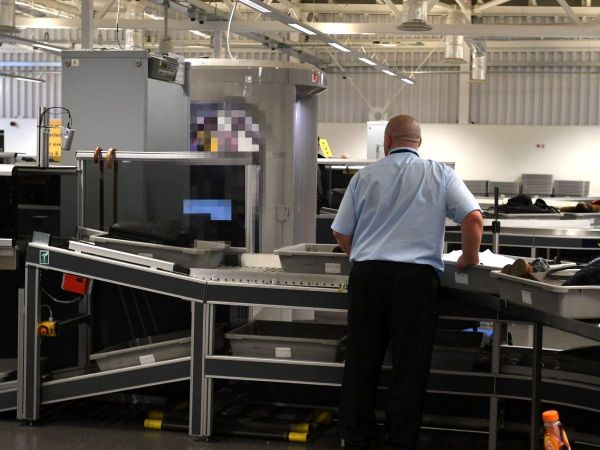 Special Assistance at Security The airport recognizes that going through the security process can be a disturbance for commuters, so it offers a designated lane for families with pushchairs and travelers requiring assistance. Search process When a customer is traveling in a wheelchair but can stand, the security representative may ask them to rise to pass through the body scanner. However, if a passenger is not able to, they can explain circumstances to the security officer, so they will be able to remain in a wheelchair. In this case, however, they will have to undergo a hand search by one of the security representatives once they’re through the scanner. If not feeling comfortable with having the search in public, the airport can offer a private search area where the procedure can be conducted. For commuters with other requirements, the security team will do their best to accommodate their needs. Check-In Times For avoiding the mad rus 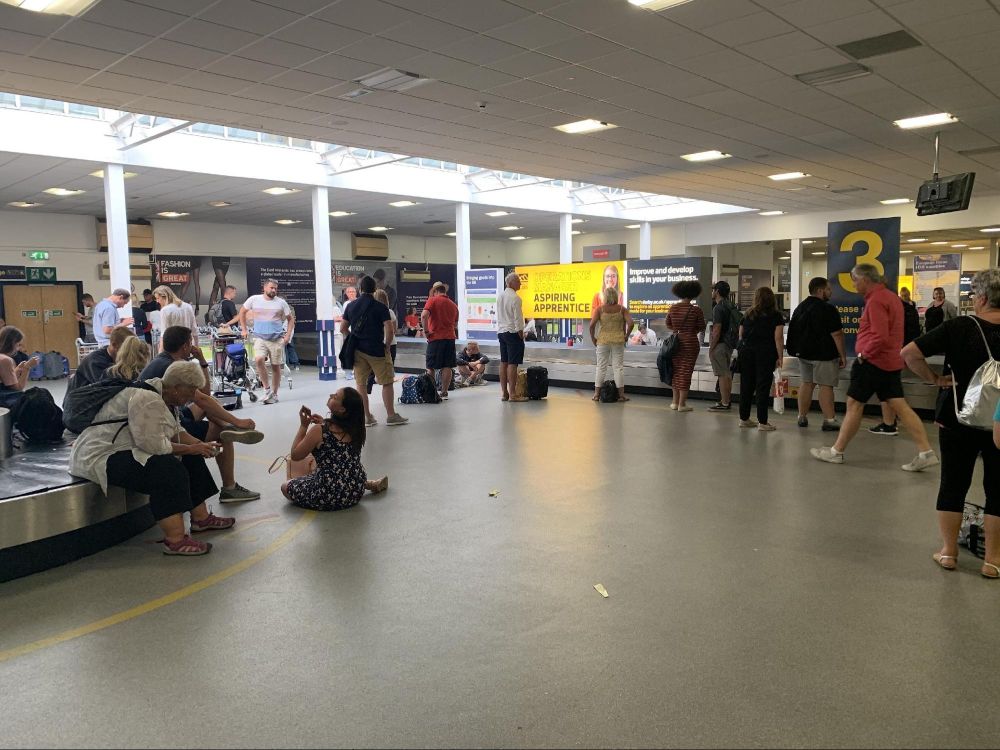 Passport Control When arriving at EMA, passengers will be required to go through standard passport and immigration control procedures. Separate lanes are provided for E.U. and non-EU passengers, while automated passports gates offer the convenience for those with ePassports to bypass lengthy queues. ePassport Gates Border Force is authorized to delivering effective, secure, and efficient border controls by using new technology to assist the process. An automated gate system is used in the Arrivals Hall at the airport for passengers with a unique style ePassport. It uses facial recognition technology to allow travelers through the border without seeing a Border Force Representative. Eligible travelers will be holders of an ePassport, which contains a chip and logo on the front cover. This includes EU/EEA citizens, British citizens, and Swiss nationals aged 12 years and over (if accompanied by an adult, passengers must be over 18 if not accompan 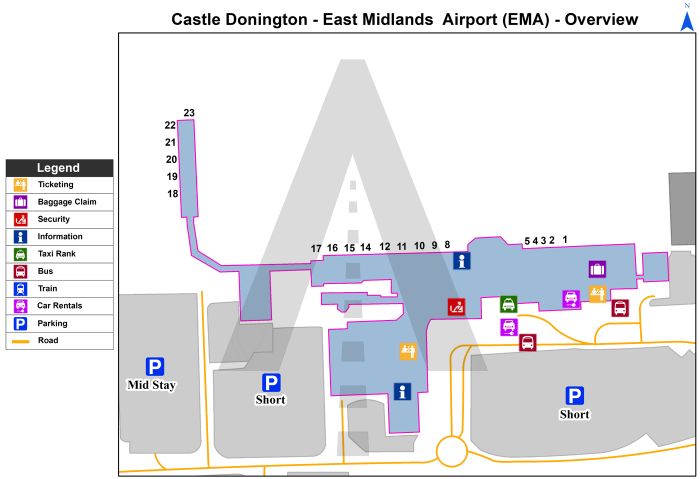 The passenger terminal at the airport finished its major overhaul - including the development of security facilities with the queuing area as well as the latest technology. New consolidated food and drink area are spread over two levels. Particular retail outlets, centralized passenger traffic and resting area, new World Duty-Free, and new Escape Lounge were added at the departure lounge of the airport. For speeding up getting to a security checkpoint, passengers can buy a ticket at the departure lounge for the Express Lane (open 05:00 am - 07:00 pm). The Passenger Terminal includes an information desk (tel. 0871 919 9000), which also arranges for wheelchairs. Travelex provides services of a foreign currency exchange in the Arrivals as well as pre- and post-security areas. The Penauille Servisair lounge is located in the post-security area, available at a modest charge. Other services include an Escape Lounge, Executive Lounge, first aid station

How To Get To East Midlands Airport Whether someone is planning to travel by train, coach, or car, the facility offers plenty of ways to help passengers to get to and from the airport without any additional stress. Regardless of whether someone is looking to travel to or from East Midlands Airport to any British city, the facility is ready to provide services that enable commuters to get their destination calm and carefree. Taxi Arrow Cars represent the exclusive Private Hire TAXI partner agency at East Midlands Airport, the only taxi firm that can pick-up and drop-off commuters on the terminal front. Their booking office is staffed by a team of experienced Customer Service Representatives, who will assist passengers with their onward travel. Arrow Cars provide a diverse fleet with a wide range of vehicle sizes and types, from eco-friendly vehicles, estate cars, 5-8 passenger minibusses, and luxury e-class estates, which are perfect if someone 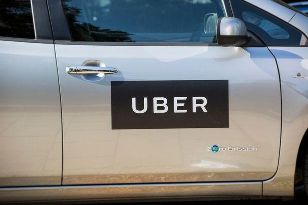 Uber Whether someone is going from East Midlands Airport to Nottingham or from Leicester to East Midlands Airport, they can count on Uber to get them to the desired destination. The app and the driver are both ready to handle the details, so customers don’t have to navigate an unfamiliar city. Passengers are welcome to use favorite features, including cash-free payment and real-time pricing, even if they’re in a new place. When travelers are ready to walk outside, they can open an app to request a ride and choose the option that suits their group size and luggage requirements. Passengers will receive information about directions to a pick-up point in the app. When going to their assigned pick-up location as specified by the app, customers should consider that this location may not always be found at the nearest exit. Uber rates to and from East Midlands Airport may be affected by several factors like time, traffic, and different ot

From small vehicles, if someone is on a budget, to executive cars and family cars, all operators provide a wide range of services at great value prices. With a wide variety of vehicles, commuters will always get the most competitive rates. Releasing all the stress of planning an onward journey is possible by managing a booking online. Popular car rental companies like Alamo, Hertz, Avis, Enterprise, National, Europcar, Budget, Sixt are based at the terminal. Operating hours of the agencies vary by operator. 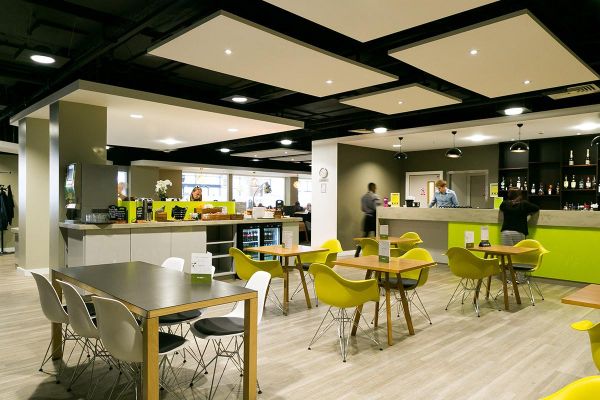 Wi-Fi The airport offers passengers the convenience of 60 minutes of complimentary Wi-Fi that can be used across all media devices. Commuters should search for EMA Public Wi-Fi and then connect to it. Premium packages are accessible for more extensive use, like downloading and streaming. The prices for packages are listed below; £5.00 per hour £10.00 per day £30.00 per month Escape Lounge Passengers should proceed through security checkpoints and the duty-free area. The lounge can be found after the shopping area, opposite Gate 17. The lounge offers a place to take some time out before the scheduled flight. Travelers are welcome to enjoy some of the delicious drinks and food provided at the Escape. The complimentary bar is well stocked with a wide selection of beer, wines, and spirits alongside Twinings tea, soft drinks, coffee, and fresh fruit juices. The booking entitles passengers to a single visit in the Escape Lounge of u 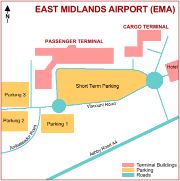 All car parks can be found on-site and are managed locally by the facility. However, the cost can vary depending on several factors like car parking facilities, availability, and distance to the terminals. All car parks at the airport include a tarmac surface, except for the Jet Parks car parks that have a gravel surface. However, passengers should consider that all car parks have the Park Mark® Accreditation. A height limitation of 2.0 meters (6 ft. 6 inches) refers to all Meet & Greet car parks as well as all multi-story car parks across the Airport sites. Trailers are not allowed in any of the parking facilities. Long Stay Free drop off is accessible in case of Long Stay 2, which is located a 12 to 15-minute walk from the terminal (the general bus service is not available during the winter months). Meet & Greet The Meet & Greet service is conveniently located across the road from the terminal building. Blue Badge holders ca 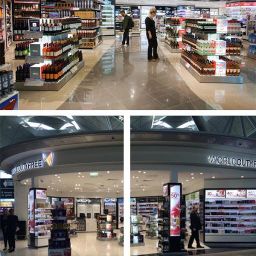 World Duty-Free Group stores offer passengers to receive the ultimate airport shopping experience. The group represents the leading travel retailer in the United Kingdom. Travelers are more than welcome to visit and enjoy an unparalleled selection of premium products that range, from confectionery to cosmetics, fashion accessories to fragrances, souvenirs to spirits, sunglasses to skincare, fine wines to fine foods, and champagne to tobacco and cigars. World Duty-Free Group that conveniently offers services at the airport, is working to bring passengers the latest products at great value prices. Whether someone is heading away jetting off to Boston for business or on holiday to Barbados, World Duty-Free is the place to purchase any of thousands of items at great savings against the U.K. High Street prices.

East Midlands Airport represents an international facility that can be found in the East Midlands close to the Castle Donington located in northwestern Leicestershire. The airfield was initially built to serve as a Royal Air Force station and was referred to at the time as RAF Castle Donington before being reconstructed as a civilian facility in 1965.

EMA has established itself as a hub for low-fare airlines such as Ryanair and Jet2.com and tour operators like TUI Airways, which serves a range of European as well as domestic short-haul destinations. It also serves as a base for Loganair. The number of passengers peaked in 2008 at 5.6 million. As a major air cargo hub, EMA was the second-busiest airport in the U.K. for freight traffic in 2016.

The property is owned by the Manchester Airports Group (MAG), which currently represents the largest British-owned airport operator and is controlled by the ten metropolitan borough councils of Greater Manchester.

RAF Castle Donington was initially opened as a Royal Air Force station in 1943. The airfield was equipped with tho hangars, three concrete runways, and served as a satellite airfield to RAF Wymeswold, located some 9 miles (14 km) to the south-east. Initially, the airport was used by 28 Operational Training Unit, training RAF Bomber Command teams on the Vickers Wellington, and then by 108 Operational Training Unit, later renamed 1382 Transport Conversion Unit, training RAF Transport Command teams on the Douglas Dakota. The airfield stopped operations, and the air force station was decommissioned in 1946.

In 1964, the locality of the former RAF station was bought by a consortium of local government authorities, when a major program of construction works and runway investment started. To reflect the area it was serving, The airfield was renamed East Midlands Airport, and it opened for passengers in April 1965. Until 1982, when the head department moved to Donington Hall, British Midland had its head department on the facility property. BMI also had its maintenance center at the airport. In 2004 the facility was controversially renamed Nottingham East Midlands Airport. However, the name change did not last long, and soon the airport was renamed to East Midlands Airport. A significant development towards the long-haul program came in 2005 with the start of holiday flights to the Dominican Republic, Cancún, and Orlando by First Choice Airways. Following growing overcrowding at the terminal, the airport facilities were remodeled and extended. EasyJet stopped operating from the airport on 5 January 2010.

Only on 3 May 2012, it was announced that Bmibaby would shut down and cease all actions in September 2012, with a few services being dropped from June. The parent agency, International Airlines Group, cited significant losses and the failure to find a proper buyer as the reasons for the decision. Consequently, Flybe and Monarch Airlines declared they were going to establish a base at the facility, and at the same time, low-cost airline Jet2.com confirmed they would also extend their operations from the facility, with an additional aircraft and new routes from summer 2013. Monarch Airlines closed its base at East Midlands as well by spring 2015. Ryanair expanded its base with a series of new routes and frequency raises on existing routes. It now serves the airport with nine based aircraft, 41 destinations with over 320 weekly flights, and about 2.3 million passengers a year, making it the largest airline at the airport.