Transportation Security Administration The Transportation Security Administration (TSA) officers check each passenger entering the United States, and they have to ensure the safety and security of the country. The airlines that take part in TSA PreCheck are Air Canada, Allegiant, American, Delta, and United. It is recommended to arrive at MDT 60-90 minutes before the scheduled departure, especially if the flight is in the early morning or during the afternoon rush hour. TSA PreCheck TSA PreCheck is available at MDT airport. Passengers who want to participate in the program should complete the enrollment online, as there is no TSA Pre application office at the airport. The official website of TSA gives detailed information on how individuals should fill each section. All members must provide documents to prove their identity and citizenship status. Also, fingerprints are the must too. As soon as they pay the sum of $85.00, for a five-year mem 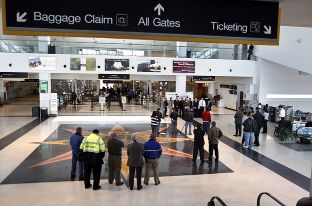 The U.S Customs, and Border Protection program (CBP) Passengers who arrive at Harrisburg International Airport are subject to check before they leave the airport. U.S Customs and Border Protection program (CBP) officers have to maintain the security screening for all passengers entering the United States. Travelers will be asked to show identification documents, and only after it will they be allowed to take their luggage at the baggage claim. Baggage Claim The baggage Claim area at Harrisburg International Airport is located on the ground level of the passenger terminal. In front of it is the customer information desk. Customers will be warned by their airlines to which baggage carousel they should go upon the arrivals. Some signs lead to the concrete baggage carousel, with the exact airline flight number. Baggage Carts and Skycaps are fully accessible for travelers, and they can find them both in the baggage claim area and also near the tic

Terminal Building Harrisburg International Airport renovated terminal has the form of Y-Shape and can accommodate double size passenger traffic than it used to in past years. It gives the possibility to reach ticket counters, baggage claim areas, or 12 gates (A, B & C surrounding the terminal building) without any difficulty. The airport has two concourses and three levels. Also, there are six boarding bridges accessible on each side of the terminal; they are situated after the security checkpoint. Furthermore, the longest distance from the security checkpoint and departing gate is 500 feet. The Terminal maps are available at MDT official website. Ground Level The first ground level of Harrisburg International Airport is divided into two parts, on the west side, which is for Arrivals and the east side of Departures. On the left side of this level are situated baggage carousels, and on the right side, there are check-in counters. Concerning t 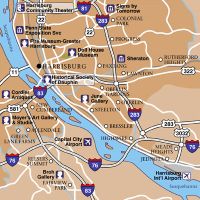 The precise postal address of Harrisburg International Airport is 1 Terminal Dr, Middletown, PA 17057, the United States. The airport is far from Harrisburg, and it is easily reached right from Interstates 83 and 283, at the Pennsylvania Turnpike, State Route 230, and the Capital Beltway. The Special signs lead to the airport, and passengers use the GPS, and the maps of the airport can easily find it. 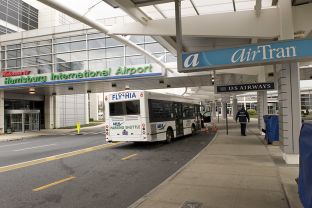 MDT Transfer companies Several Transfer companies operate at MDT airport. Among different transfer providers are Lyft and Uber, also, Hotel Shuttles, Limousine and car services are available at Harrisburg International Airport. Uber and Lyft at MDT Uber and Lyft are both available at Harrisburg International Airport. The Driver can be met on the third floor of the Garage, in a concrete passenger pick up area. MDT Hotel Shuttles There is a great variety of hotels around Harrisburg International Airport. Most of them provide shuttle service to and from MDT airport. Passengers should contact the hotel directly to check the availability and also arrange pick up details in advance. Customers should take into account that some hotels have additional fees for shuttle services. The list of hotels that have made ground transportation agreements with the airport to provide shuttle services is the following: Best Western – Premier (717-561-2800);

Car Rentals Harrisburg International Company allows customers to choose from one of the Car Rental companies that is located on the ground floor. The options are well-known providers: Alamo, AVIS, National, Budget, Hertz, Enterprise, and Payless Car Rental. Alamo Alamo has been ranked as the best among the rest Car Rental companies. The average price for an economy car starts at $26.62 per day. Passengers can easily find the Alamo rental desk at the terminal building; the precise address is 2 TERMINAL DR STE 102, MIDDLETOWN, 17057 5046, PA, Pennsylvania. In the case of Long term rental, the prices change and may be reduced. Also, passengers should take into account that while processing payment, they will be asked to pay a deposit in case of fines or any damage. 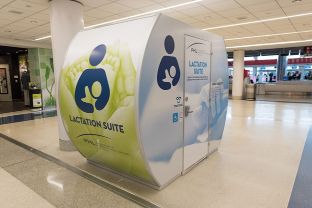 MDT Customer service Harrisburg International Airport has a lot of services and facilities to make customers' journeys as comfortable as possible. MDT offers Free Wi-Fi access to all travelers, by simply choosing HIA FREE WIFI in the system of connection. Also, it is not recommended to download large size documents as it slows down the quality of the internet. The ATMs are accessible in the baggage claim area and on the second level as well, before the security checkpoint. The airport, including the parking spaces, work 24/7. Accessibility & Assistance at MDT The MDT staff is ready to help each passenger and meet all the needs of every individual traveling via Harrisburg International Airport. The Skycaps and wheelchairs are fully accessible at the airport, they are mostly located near the ticket counters, and people who need further assistance can ask for help or simply call the dispatcher on the following telephone number: 717-948-35

MDT Garage The Garage of Harrisburg International Airport is connected with the terminal building via covered walkways, elevators, and sky bridges. It is the best option for those travelers who plan to leave their vehicles for a few days, also to drop off and pick up passengers. The Garage works 24/7. The rates apply according to time slots. For instance, 30 minutes of parking costs $2.20; from 30 to 60 minutes, the rate doubles ($4.40), each additional hour also costs $2.20. The daily maximum is - $20.00. Long-Term Parking MDT Long-Term Parking is the most convenient offer, and the prices are the best among the others. The rates for 30-60 minutes are the same as the Garage. It costs - $4.40. Also, additional hours are the same, with an average of $2.20. But the daily maximum is only $9.50. The Long-Term Parking is 1 mile far east from the terminal building. The airport shuttle runs every 7-10 minutes. Cell Phone Lot Harrisburg International A 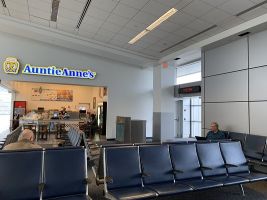 MDT Shopping The Duty-Free Shopping is not available at MDT airport, but despite this fact, there is a Hudson News souvenir shop that can be found in two locations. The shop is before the security checkpoint and after it as well, near the concourse B. The shop has plenty of options for both local and branded gifts. Concerning Concourse A, here is located Sensory Massage Studio, near the gate A3. It is an excellent idea to reduce stress, relax the body, improve circulation, and provide a healthy nurturing. The working days are Wednesday, Thursday, and Friday. Dining options The dining options are different at Harrisburg International Airport. The top popular cafes give the possibility to taste delicious coffee and pastry as well. Concourse A houses the following cafes and restaurants: Phillips Seafood and Subway. In Concourse B, there are Starbucks and Capital Cafe, and regarding the Concourse C, there are situated - Auntie Anne's and Dun

The history of the MDT foundation

It is already more than 100 years MDT is serving central Pennsylvania. The very first attempts of working date 1898, when Signal Corps of the U.S. The Army stationed in the same location as the airport is today. After that, in 1918, the first airplane landed. After World War II, MDT was called Olmstead State Airport. Only in 1973, it was named as Harrisburg International Airport. The reconstruction of the first terminal, which was designed by Architect William Pereira, was completed in 1973.

Since 1998, Harrisburg International Airport has been owned by Susquehanna Area Regional Airport Authority (SARAA). The board of directors is chosen every five years, from the counties of Cumberland, Dauphin, and York. Also, the cities of Harrisburg, Fairview, and Lower Swatara townships.

More than 1400 people are employed and take an active part in fruitful cooperation. As a result of the 2004 renovation project, the new terminal building is 360,000 square feet.

Airlines and Destinations of MDT

According to official airport website statistics, the airport annually handles approximately 150,000 aircraft operations. The passenger traffic calendar from 2013 shows that the number of travelers in 2015 was the least - 1,173,938, but this figure improved in 2018 with - 1,294,765 customers.