St Mary’s Airport Security The Department for Transport (DFT) along with airport security staff conducts the testing, have specific security measures and procedures and monitor for a certain percentage of liquid items which are contained within the departing passengers' hand baggage. Therefore, all passengers must meet the baggage requirements to be allowed to travel via ISC airport. Boarding and Check-in at St Mary’s Airport St Mary's Airport recommends all departing passengers to check-in approximately one hour before flight departs. Passengers must be aware that Skybus check-in closes about 30 minutes before the trip departs. After this time, passengers may have to book another, new ticket at their own cost, since the airport does not take the responsibility to offer credit vouchers or refunds if for any reason passenger misses the cut off time. Hence, Skybus advises its passengers to check-in at least one hour before and 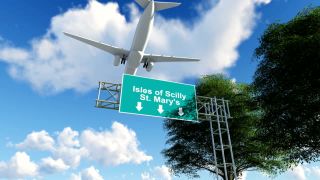 All new arrivals at St Mary’s Airport proceed to the arrivals area of the main terminal building of the ISC airport. Arrivals of the ISC airport should reclaim their baggage, go through some security checking procedures, then go ahead to exit or ground level, to access public services. 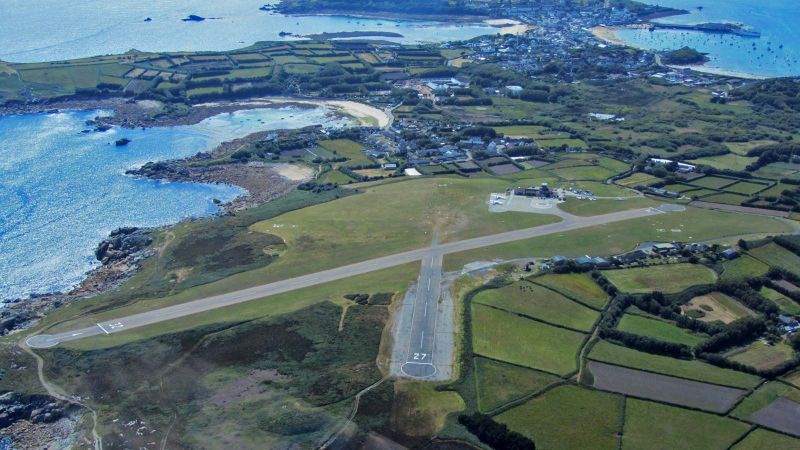 St Mary’s Airport is located just within one nautical mile (1.9 km; and 1.2 mi) distance at the east of Hugh Town in the Isles of Scilly on St Mary's, and to the south-west side of the region of Cornwall, in the UK. The precise postal address of St Mary’s Airport is 3 Hanover Ct, Isles of Scilly TR21 0NG, United Kingdom. For any questions, regarding flight, airport services, or for any inquiries, passengers can call at +44 1720 422677.

Isles of Scilly Boat Trips at St Mary’s Airport From St. Mary's Airport, passengers can use the service of the Isles of Scilly Boat Trips, which is ready to carry visitors every day to the 'off islands' including Tresco, St. Agnes, St. Martin's and Bryher. Each island around the Isles of Scilly has its own boating company that can ferry passengers around. Most of the boat operators at the Isles of Scilly have a website, or social media presence, where they publish the latest events and trips. St. Mary’s Boatman Association at St Mary’s Airport At St Mary's Airport, passengers can use the service provided via St. Mary's Boatman Association, which has a ticket kiosk located at the main terminal building of the ISC airport. For further information, passengers can contact 01720 423999. The operation hours of the boatman associations are: The morning opening hours are from 09:30 am to 10:15 am. The afternoon

Isles Of Scilly Skybus Ltd at St Mary’s Airport At St Mary's Airpot, there is an Isles Of Scilly Skybus Ltd., which greets all arriving passengers at the ISC airport. The Paulger's Transport drivers will be waiting happily to greet each passenger and take them anywhere around the island. The postal address of the company is 3 Hanover Ct, Isles of Scilly TR21 0NG, United Kingdom. It is situated inside the St Mary's Airport terminal building. For further information, passengers can contact the company and call at +44 1736 334220. Isles Of Scilly Skybus Ltd Rates Passengers who will use transfer service via Isles of Scilly Skybus will be asked to pay just £8.50 per adult return, as for child traveling, passengers will have to pay only £4.00 on per child return. Skybus passenger allowance Passengers are required to hold necessary documentation to be allowed to travel via Skybus service. The Skybus staff will be waiting

Driver Requirements & Responsibilities Passengers who want to hire a car from the Isles of Scilly must bring their full driving license for at least two years. Note that the provisional licenses are not accepted. Age Requirements for car hiring Each car hire company has its certain age requirements, but most of them rent cars to people aged between 25 and 70. If a passenger belongs to the age gap of 21-25 years, they are likely to have to pay a young driver fee. If a passenger is 65 years old or older, they may have to pay a senior driver fee. While searching a vehicle, drivers should untick the box that says "Driver aged between 30-65," and instead, drivers should add their age. Car hire payment and fees When passengers pick-up their preferred car, they will be asked to leave a deposit for it. Also, passengers will have to pay for any extras they want to have, such as a GPS, child seat, or any other additional services, that cu 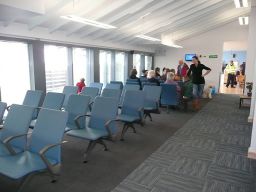 Parking information of St Mary’s Airport St Mary's car park holds around 480 spaces on four floors building. The approximate height restriction for parking, which applies in all car parks, is approximately 1.85m (6 ft). In 2017 the ISC parking was awarded the Safer Parking Status. St Mary's Airport parking still boasts a 100% car crime-free security record, which reaffirms the Council's commitment to eradicate car crime from the city center car parks. St Mary’s Airport Parking Rates ISC parking rates for per hour are divided as follows, available from Monday to Saturday (Note: the car park area closes at 11.30 pm): From 8.00 am to 6.00 pm, the cost is estimated to as £1.50 each hour or part thereof. From 6.00 pm to 8.00 am, the cost is estimated to as 90p each hour or part thereof. Sunday and bank holidays apply flat rate only for £2.00 from 10.00 pm until 6.00 am. Parking is free after three pm-midnight only

St Mary’s Airport Café St Mary’s Airport provides a superb café along with panoramic views across the harbor and the islands around the area. The precise Postal address of the cafe is 3 Hanover Ct, Isles of Scilly TR21 0NG, United Kingdom.

At St Mary's Airport, around 40 flights are running via three different routes right from the Isles of Scilly. Routes connect the ISC to three different cities. The most popular routes that connect Isles Of Scilly to other destinations are the following: Lands End, Newquay, and Exeter.

Currently, there is only one airline operating from ISC Airport, and it is the Skybus fixed-wing air service which is contracted via the Isles of Scilly Steamship Group and flies from Lands End, Exeter, and Newquay. Isles of Scilly Skybus has flights to Land's End and Newquay; Besides, it has seasonal charters to Exeter.

The Capacity of St Mary’s Airport

According to the statistics of 2018, the ISC handled around 92,195 passengers and managed 12,546 aircraft movements. Over 90% of the operations are done through public transport flights, that are mainly governed by Islander and Twin-otter aircraft. These flights vary seasonally with frequency from daily flights from 20 to 120 and regularly operate below 4000ft in a narrow corridor of airspace through a military flying area and link Lands End. The ISC airport is used as a landing area for some emergency services, including the HM Coastguard search and Rescue Aircraft, which is based out of Newquay Airport and used by the Cornwall Air Ambulance. Besides, the ISC airport is being the administrative base center for the Isles of Scilly Fire and Rescue Service.