Humberside Airport is an international, public-use airport, which is located at Kirmington in the Borough of North Lincolnshire, in England. The airport is just within 10 nm (19 km; and 12 mi) from the three large settlements, including Hull (north side), Scunthorpe (west side), and Grimsby (east side). Humberside Airport codes are IATA: HUY, and ICAO: EGNJ; Airport is owned by Bristow Group and operated via Humberside International Airport Ltd. 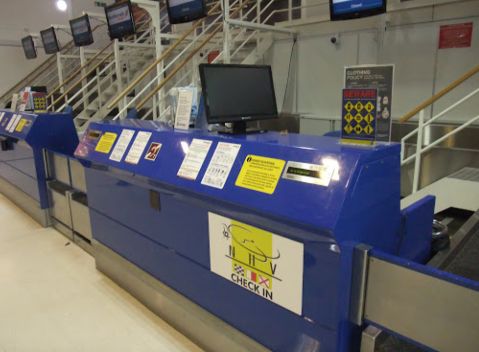 Security Procedures Passengers should go through security checkpoints once they get an airline boarding pass. At checkpoints, passengers need to put their belongings, such as electronic devices, metal-made items, liquid packages, etc., in a separate tray for X-ray screening. Also, sometimes passengers are asked by security officers to remove coats, jackets, belts, and even shoes. Security for Special Assistance At Humberside Airport, all security officers are well-trained and able to understand any sensitivities regarding limited mobility, disabilities, and other individual needs, to assist those travelers during security procedures. At HUY, wheelchair users can stay in their wheelchair and receive a manual body, pat-down checking. The security officers may also swab passenger's shoes and hands with a dry piece of cloth, which is later placed in a tray for X-ray to detect any outlawed substances immediately. Passengers with the need for ass 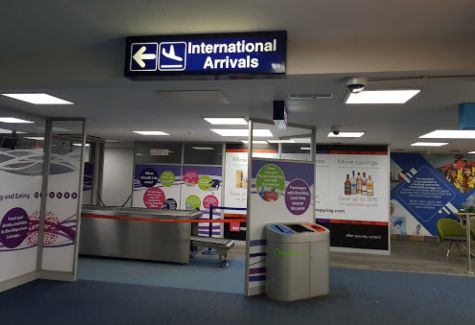 Humberside Airport arrivals, upon their entry to the UK, should follow airport signs and take the right way to baggage claim, meeting points, transfer, or exit areas, for pick-up and ground transportation site.

Humberside Airport has one single terminal, surrounded by car park facilities, aircraft, and helicopter airfields, and the terminal building itself is equipped and featured with various customer services and facilities for the convenience of its passengers and guests. 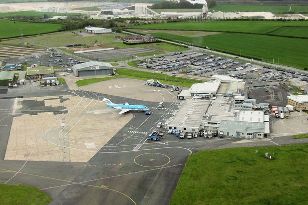 Humberside Airport is located in Kirmington, Lincolnshire. It serves the regions of East Riding of Yorkshire, Kingston upon Hull, and Lincolnshire. The postal address is A18, Grimsby DN39 6YH, the United Kingdom. 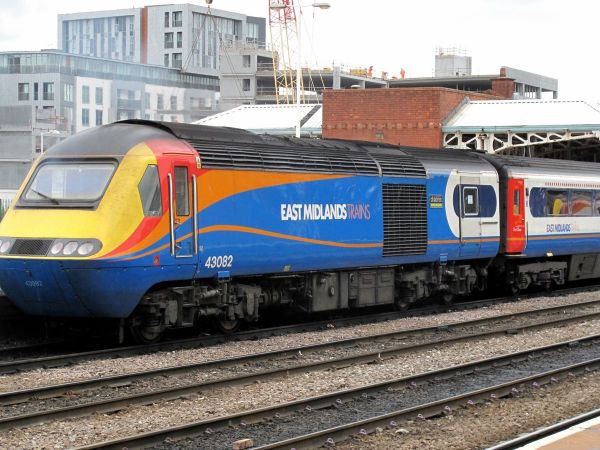 Humberside region and the airport itself is well-connected with the help of numerous convenient rail and road links. Humber Flyer Bus Humber Flyer bus provides a daytime service managed by Stagecoach, which runs to the HUY airport from Monday to Saturday, within an hour interval from Grimsby and a half-hour interval from Hull. Besides, the bus connects the following destinations: Cleethorpes, Humberside Airport, Barton, Grimsby, and Hull. CallConnect Bus The CallConnect bus service carries passengers from suburban areas to HUY. Service does not have a fixed schedule and responds to its passenger requests. Call: 0345 263 81 39. Wolds Villager X4 Bus The Wolds Villager X4 bus service runs from Monday to Friday and connects passengers traveling from Brigg, Scunthorpe, Wrawby, Barnetby, to the HUY airport. C4 Bus The C4 bus runs on Saturday between Redbourne, Scawby, Brigg, Hibaldstow, Wrawby, Barnetby, and HUY. Rail At Humberside, various train

Getting at the airport by car Humberside Airport, located on the A18 trunk road, is just three miles from the main junction 5 of the M180. HUY has convenient road connections with the main UK north-south and east-west motorway network through the M62, M18, A1, and M2, as well as via the Humber Bridge. Passengers can use Google Maps and insert the postcode: DN39 6YH into their satellite navigation system, to get the best route. Cable Taxi Humberside Airport is served via Cable Taxi, which is the airport’s partner company. The local taxi office is located in the main terminal building. Passengers can pre-book their ride via calling at the company’s 24-hours phone line, at 01472 500500.

Avis Rent a Car Avis Rent a Car allows its customers to hire a car right from the HUY airport. Avis Rent, a Car facility, is located in the arrivals lounge of the main terminal building. Call: 0844 544 6016. Europcar Europcar is one of the popular rent a car company which allows HUY airport passengers to hire a car right from the airport. Europcar facility is located in the arrivals area in the main terminal building. Call: 0871 384 3409. Car Rental age and license requirements To hire a car in the UK, the driver needs to be at least 23 years and must hold a valid driving license (at least one year). Drivers under the age of 25, will need to pay an extra charge each day. Drivers under the age of 25, can hire a car from Group A (Citroen C1), Group B (Ford Fiesta), Group C (Peugeot 308), Group E (Vauxhall Astra), and from Group I (VW Golf). Drivers must bring and show a valid driving license when the rental car is collected. 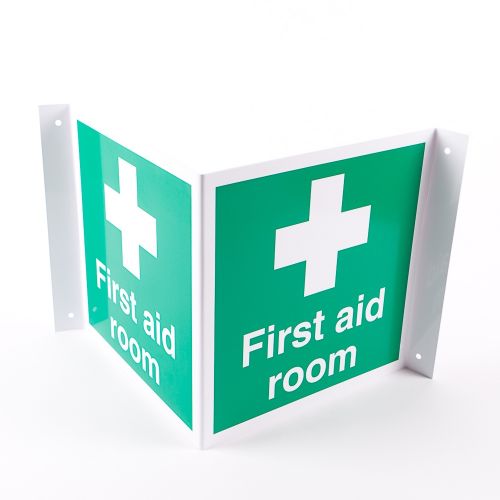 Free Wi-Fi Humberside Airport offers free Wi-Fi access to surf the webs for free throughout the terminal building. HUY internet features: Free access for maximum to 30 minutes, during 24-hours. It may be used on all devices. Provides premium service, which is suitable for heavy streaming, usage, and pay-as-you-go, changeable rate tariffs. Account set-up for free if a passenger travels a lot via Humberside Airport. Weston Aviation Weston Aviation offers a comprehensive handling service for any private helicopter and jet arriving at Humberside. Service provides private airside access, convenient and secure aircraft access. It also provides a cost-effective private helicopter or jet charter to both international and domestic destinations. Call for a reservation or any questions at 01652 680922. Banking TheExchange provides 0% commission and available exchange rates for all currencies, including foreign ones. The banking service has a wide selecti 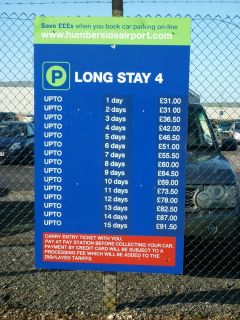 Passenger drop-off and pick-up Humberside Airport provides various car park sites that are even signposted to find. HUY parking zones are within a short walking distance from the main terminal. A drop-off zone for passengers (with luggage) is accessible close to the terminal, in car park N1. If the driver is meeting passengers from the arriving area, he/she should park in the short stay car park - Car Park 1, which is free for 15 minutes. Passengers can reserve car park zone in Long Stay, in Car Parks, 2, 3, or 4. Car Park Restrictions Drivers must be aware that any vehicles which will be parked on yellow lines, red lines, or on the restricted areas (e.g., bus zone) will be charged with fees. The Vehicle Control Services Limited 2 Europa Court, along with Sheffield Business Park and Sheffield S9 1XE, operate and control HUY parking on behalf of the airport. Accessible Parking HUY provides dedicated accessible parking spaces for disabled, which 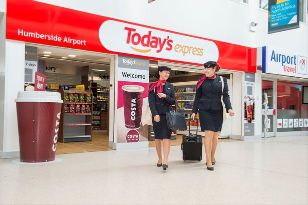 Humberside Airport Restaurant & Bars Humberside airport also provides the restaurant and bar chain right at the HUY airport location. HUY restaurants and bars are available in the pre-security area. The dining chain offers an exclusive, daily menu with baguettes, jacket potatoes, and paninis. Visitors and customers of the bars chain can enjoy and order various types of beverages in the pre and post-security checkpoint areas. The HUY bars chain offers a complete array of wines, beers, and spirits. For reservations, prices, or other related questions, passengers or visitors of HUY airport can call at 01652 682065. World Duty-Free In the departure lounge, passengers can visit the tax-free World Duty-Free shopping stores, which are featured with one of the biggest brands in perfume, spirits, wines, tobacco, etc. For more information regarding prices, offers, products, and availability, customers can call on 01652 680472. Today’s Express

Humberside Airport is an international, public-use airport, which is located at Kirmington in the Borough of North Lincolnshire, in England. The airport is just within 10 nm (19 km; and 12 mi) from the three large settlements, including Hull (north side), Scunthorpe (west side), and Grimsby (east side). Humberside Airport codes are IATA: HUY, and ICAO: EGNJ; Airport is owned by Bristow Group and operated via Humberside International Airport Ltd.

Humberside Airport was formerly built as a Royal Air Force base in RAF Kirmington and was opened in 1941 right during the Second World War, from which RAF No.166 Squadron operated the Avro Lancaster. After the war ended, the site was abandoned until 1974. In that year, the local council decided to re-open the site, which was referred to as Kirmington Airport. Once the name of the local site was changed into Humberside, the airport was renamed as Humberside by the local government. Later, in 1992, the main runway of the HUY was extended and designated to its current length, which allows the operation of more massive aircraft.

Besides passenger flights, the HUY airport is also used to serve the gas storage of offshore, drilling operations for BP, and Centrica Storage along with more than 5,000 air transport helicopter charters. In 2013, it was announced that the Bond Offshore Helicopters were awarded a joint contract with Perenco. This contact aimed to start the operation of flights directly to Perenco's platforms in the Southern North Sea. This means that the HUY airport holds three of the biggest UK Helicopter operators that are based at the airport site. Humberside Airport houses a new UK Search and Rescue base from which on April 1, 2015, the Bristow Helicopters started operations.

Humberside Airport has one of the highest approval levels of NEQ out of any airport available in the whole of Europe. HUY has cargo operations as well. In 2007 there was significant growth in cargo from around 144 tonnes to at most 1,132 tonnes, later in 2011. This increase was due to the regular flights of Icelandair Cargo. However, in 2012, these activities ceased to operate, and HUY's cargo had a reduced number of 123 tonnes, later in 2016.

Humberside Airport holds a "CAA Public Use Aerodrome Licence" (No. P739). The license allows flights for flying instruction, as well as for the public transport of passengers. HUY tends to have a high amount of aviation activity, along with around five resident flying clubs with organizations that offer rotary and fixed-wing training. According to CAA official statistics, in 2019, HUY airport carried 204,463 passengers, had around 18,228 aircraft movements, and carried 199 cargo tonnes.

Humber International Airport is served by the following airlines, which operate regularly scheduled flights, along with charter routes to and from the Humberside area.

Airlines and their destinations are:

Alongside the above scheduled regular and seasonal flights, charter flights also take place in the following destinations: Lapland, Iceland, and Italy.