Dublin Airport in Irish called Aerfort Bhaile Átha Cliath is an international public airport which serves Dublin, the capital city of Ireland. The airport codes are IATA: DUB, and ICAO: EIDW. The Airport is situated within 7 km (4.3 mi) at the north of Dublin, in Collinstown, near the regions of Swords, in Dublin. The owner of Dublin Airport is the Government of Ireland and is operated via DAA. Check-in at the Dublin Airport Dublin Airport advises all its passengers to arrive at the airline check-in counter at least two hours before for European flights and around three hours for long-haul flights. Also, passengers must consider and allow extra time to park a car. All passengers are recommended to consult with their airline for precise check-in times as times vary. Additionally, some airlines offer an evening-before bag drop service . In Terminal 1, the airline check-in counter stands on the first floor of the building. In Terminal 2, the check-in desks are located on the ground floor of the building. Self-service online check-in and bag drop DUB airport provides self-service check-in kiosks along with internet check-in technologies to facilitate passengers with seat selection, early check-in, and issue boarding passes. If a passenger requires any assistance while checking-in via the self-service kiosks, airline employees will 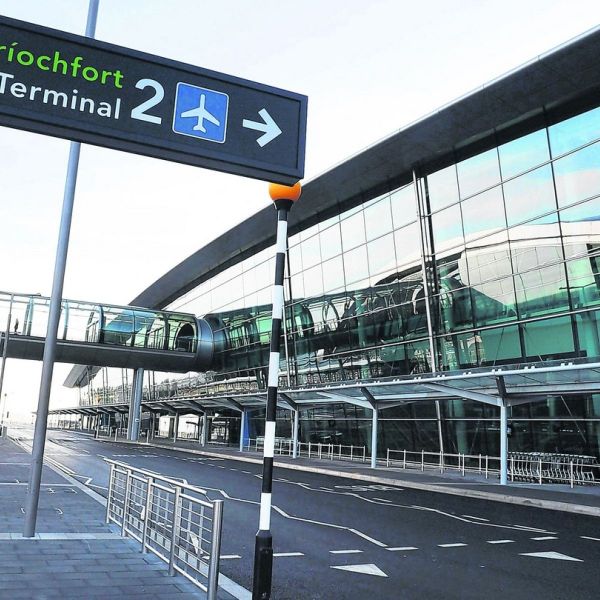 Dublin Airport holds two passenger terminals: Terminal 1 DUB Terminal 1 was opened in 1972 and handled over five million passengers each year. Terminal 1 has been regularly improved and extended over the last two decades. In 2009, a new extension featured Pier B, new retail and food outlets. Terminal 1 is currently home to all airlines except American Airlines, Aer Lingus, Delta Air Lines, Norwegian, Emirates, and United Airlines. Terminal 2 Terminal 2 covers a 75,000 m2 (810,000 sq ft) and Pier E, which offers aircraft parking for 27 narrow-body aircraft with 19 departure gates that handle up to 15 million passengers per year. Terminal 2 is currently the transatlantic gateway for flights to the US and features a US preclearance customs and immigration facility. Getting at the DUB by Car Dublin Airport provides designated passenger drop-off zones for a flight. These zones are located outside both Terminal 1 and 2. Motorists must follow signs for T1/T2 Departures to access set down zones. Picking-up passengers Drivers who have to pick-up passengers should reach short-stay, multi-story car parking. Short-stay areas are clearly signposted to both Terminal 1 and 2. Rates start from €3 per hour. Unattended Vehicles at DUB For passenger and security safety reasons, vehicles should not be left unattended, as unattended vehicles outside terminals will be clamped or towed by the DUB airport police. A recovery charge costs €140. Dublin Bus Dublin Bus operates and runs from the Dublin Airport Bus Park in Zone 15. Go-Ahead Ireland Go-Ahead Ireland company offers Bus route 102 to Sutton Station that serves Swords, Portmarnock, Sutton, and Malahide. There is another Bus route 33A which serves Skerries, Ru

Dublin Airport Taxi Passengers who are arriving by taxi at Dublin Airport will be dropped-off on the forecourt area outside Terminal 1 or Terminal 2. DUB Taxis are available from the forecourts directly from both terminals. Passengers can follow Taxi signage to get to the designated airport taxi ranks. A taxi dispatcher is also available at the taxi rank if a passenger requires any further information and assistance. Passengers are entitled to a taxi to: Hire a taxi for trips up to 30km Calculate all fares on the taxi meter Bring a receipt printed by the taximeter. All licensed taxis display passenger information that includes the rights, responsibilities, and fare information, supplied by the Commission for Taxi Regulation. All licensed taxi drivers at DUB must carry their driver identification cards in a clear view of the car and customer. DUB Taxi Rates All licensed taxis at DUB should utilize typical taximeters as a charging system, wit Wi-Fi & Printing Services Dublin Airport provides a Wi-Fi zone, with free wireless internet in both Terminals. Luggage Facilities All the DUB luggage facilities include left luggage, bag wrapping, luggage storage, and luggage trollies. Bank & Bureau De Change Passengers can pre-order foreign currency for collection or visit at the foreign exchange outlets located in Terminals 1 and 2. Multi-Faith Room & Church There is a multi-faith prayer room and church available at DUB. Airport Lounges Airport lounge includes a tranquil setting, comfortable, newspapers, magazines, air-conditioned Lounges, drinks, snacks, a Business Centre, computer access, and free Wi-Fi access. Terminal 1 Lounge is between the Security lanes, on the 2nd floor, accessible through the stairs of lift. Terminal 2 Lounge is on the same level as the 400 gates and can be accessed from the elevator that brings passengers to the main corridor of the lounge and is sign Long-term parking Dublin Airport has two Long-term parking zones providing 18,600 spaces in both Terminals 1 and 2. Those car parks are available for drive-up parking and online pre-booking. Online pre-booking is recommended, especially during busy periods. Drivers should follow the signposts for Long-term parking when reaching the Airport. Customers are advised to arrive early to allow enough time to park and transfer via bus to either Terminal. No-H2O Car Valeting Service DUB provides NoH2O waterless car valet service located in T1-T2 and the Express Red Car Park. Drivers can find NoH2O at the Vehicle drop-off zone, beside the NoH2O advertising board just after the entry barriers of Express Red Car Park. For Terminal 1, enter the Multistorey at Block A. For Terminal 2, enter the Multistorey. For questions about car valeting, call 086 170 0150. Short-term parking Dublin Airport provides 4,000 Short-term car park spaces situated in Terminals Cafes and Restaurants Dublin Airport provides various cafes and restaurants that are available across Departures and Arrivals areas in both Terminals 1 and 2. Food Village Food Village offers a variety of drinks and food, including breakfast, coffee, salads, sandwiches, hot dishes, and pastries. Location: Terminal 1, Departures Level, pre-security area. Available: Mon-Sun from 08:00 to 21:00. Irish Meadows Irish Meadows providing coffees, sandwiches, and confectionery, in the boarding gate area for the last-minute snack before boarding. Location: Terminal 2, After US Preclearance. Available: from 07:00 till the last flight. Marqette Marqette offers a bustling self-service, a la carte food, sandwiches, ready to go salads, soup, a full bar, and an on-site bakery. Location: Terminal 1, Departures Level, After Security; Terminal 1, Arrivals Level. Available: From Mon-Sun, and from 04:30 to 18:00. Wrights of Howth Wrights of Howth is a conveni

Dublin Airport in Irish called Aerfort Bhaile Átha Cliath is an international public airport which serves Dublin, the capital city of Ireland. The airport codes are IATA: DUB, and ICAO: EIDW. The Airport is situated within 7 km (4.3 mi) at the north of Dublin, in Collinstown, near the regions of Swords, in Dublin. The owner of Dublin Airport is the Government of Ireland and is operated via DAA.

The Capacity of Dublin Airport

According to the Annual Passenger Traffic statistics of 2019, Dublin Airport handled around 32.9 million passengers that made DUB's busiest year on record. Hence, DUB became among the 12th busiest Airport throughout Europe and is by far the most active by the total number of passenger traffic of Ireland's airports. Along with the success of the 'Celtic Tiger' of Ireland's economy, DUB saw an increase in the 1990s and 2000s. This demand was driven by the growth of charters that has resulted in a wide number of new routes that were opened and operated to different destinations in the European Union accession states.

The DUB airport saw significant declines in passenger traffic in 2009-2010, although, since 2011, there was an increase in traffic. During the following year, this increase continued with growth by 1.9%. As for statistics of 2013, passenger numbers at Dublin Airport were determined to be above 20 million for the first time since 2009. During 2014, this growth continued with an 8% increase. As of 2015, passenger number has increased by 16%, and the previous record of 23.46 million passengers that was set in 2008 has already been passed.

In 2019, DUB was selected for the Special Achievement Award in Geographic Information Systems (GIS) for the use of mapping software from ESRI Ireland.