Easterwood Airport (Easterwood Field) is serving as the regional airport for Texas A&M University, Brazos County, Texas, and Bryan-College Station. Tha facility can be reached from Farm-To-Market Road 60 West (Raymond Stotzer Parkway), about 0.25 miles (0.40 km) from Texas A&M University and three miles southwest of College Station. No public transportation is available from Easterwood Airport to the surrounding areas; however, in 2019, a new university bus route started its operations aimed to connect CLL with the Texas A&M Hotel and Conference Center and Engineering Quad. Easterwood Airport bus route is available only to those with a University ID or Brazos Transit District ID. Despite managing and owning the property, there are no aviation courses at the University. 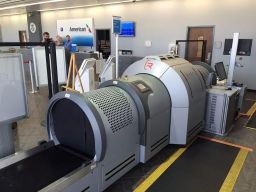 TSA Transportation Security Administration is responsible for developing policies and operations that are aimed to protect passengers. TSA implements security measures that help minimize possible terrorist threats. Mostly concerned with air travel, the organization has its representatives at Easterwood Airport, where passengers are checked at the security checkpoints. All the travelers are required to go through screening as well as other TSA procedures that include checking passengers’ belongings separately. The TSA processes at CLL airport are similar to those at the majority of different airports. 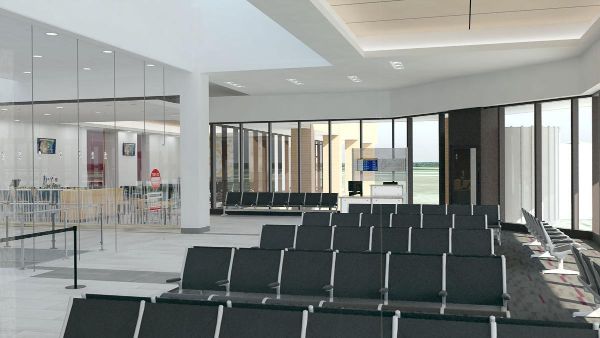 Baggage Claim After arriving at the Easterwood Airport, passengers are welcome to proceed to the baggage claim area, which is conveniently located on the lower level of the passenger terminal building. After entering the area and picking up, their luggage passengers can leave the facility whenever it is convenient for them. 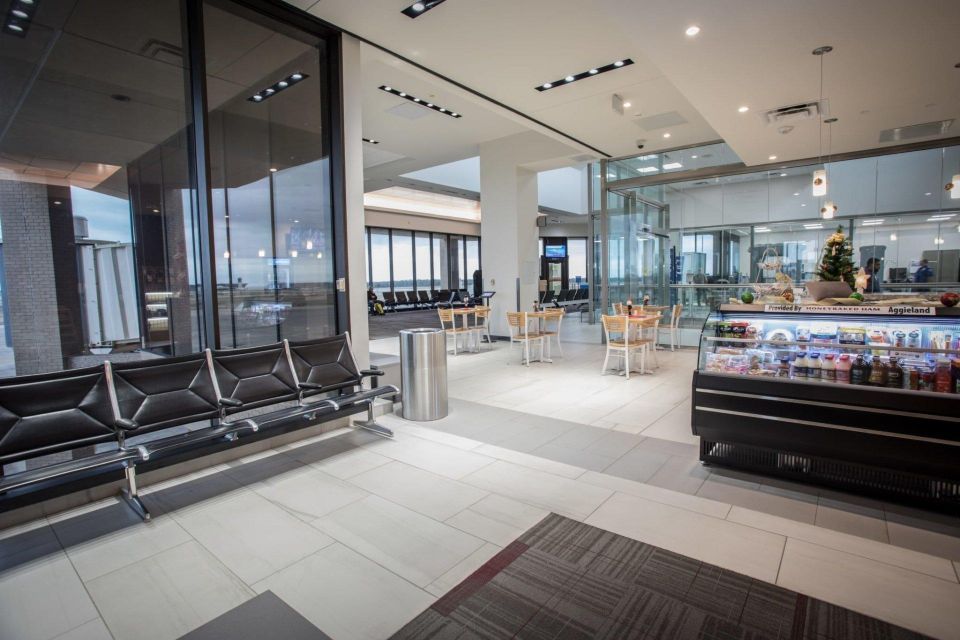 The terminal at Easterwood Airport offers seasonal service to Birmingham (A.L.) and daily flights to Dallas/Fort Worth, Houston. The terminal includes a complimentary two-hour visitor parking area as well as drop off areas located on the upper level, and shuttle/taxi pick up areas on the lower level. The ticket counters, TSA security checkpoints, and boarding areas can be found on the upper level of the building. Baggage claim and rental car agencies are both on a lower level. Passengers should consider that the terminal has limited operating hours, so it is not possible to stay overnight. It’s working hours start 1 hour 30 minutes before the first departing flight and continue until 30 minutes after the last arrival. Administration hours are Monday - Friday: 08:00 am - 05:00 pm. 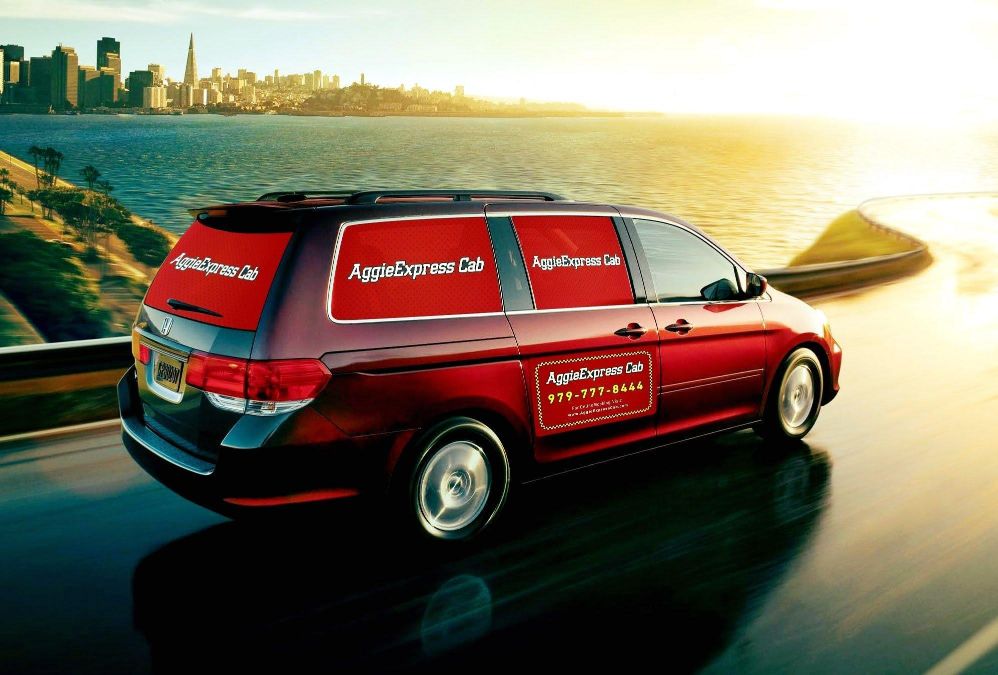 Public Transportation Currently, public transportation infrastructure is not available at Easterwood. Therefore, passengers should utilize private transportation options like taxis, rental car services, and ride-sharing. Texas A&M University has a shuttle bus designated as “Route 7” that runs between the facility and University campus and is only available to faculty, students, and Texas A&M hotel guests. Taxis In lots of areas, taxis provide services as one of the most comfortable transportation means to move around. Several agencies are operating in College Station. However, all passengers are recommended to contact the preferred taxi service only when being fully ready to leave the facility, so drivers would not have to wait outside, or circle around the building and cause traffic. Another recommendation for travelers is only to use authorized taxi agencies to avoid possible scams and other issues. AggieExpress Cab Aggie 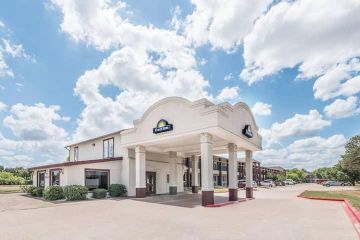 Rideshares One of the most popular and common transfer options is by choosing from rideshare agencies like Lyft and Uber that both are available locally. These companies are ready to drop passengers off at the departure level area. Passengers should notify their driver concerning the airlines and terminal upon entering the property’s premises. Commuters are recommended to note some crucial aspects before ordering a car. One of the most important advice is to keep in mind baggage requirements before ordering a car, that should be selected For example, the standard economy rides are mostly operated with vehicles like Ford Escort, Prius, Toyota Camry, and Ford Escape. These cars can accommodate four passengers and about two to three large suitcases. Of course, when fewer passengers are riding, there is a possibility of putting more luggage. Uber XL and Lyft Plus UberXL and Lyft Plus offer the XL Ride services with cars as Chevrolet Travers

Avis Avis car rental counter is conveniently accessible at the baggage claim of the facility and promises to offer the perfect car to accommodate each customer. All the options are comfortably located outside the CLL building. Passengers are welcome to proceed to the desk where, after showing a valid driver’s license, they will be offered preprinted rental documents and keys. After-hours returns are available at the agency. When returning a car in after-hours, after parking and locking a car, customers should put the completed contract together with keys in the dropbox, which is located in the returns area. Operating hours: Monday - Friday: 08:00 am - 05:30 pm; Saturday - 08:00 am - 03:00 pm; Sunday 08:00 am - 04:00 pm Contact information: (1) 979-846-9007 Website: https://www.avis.com/en/home Hertz Hertz desk is available at the baggage claim area of CLL. At the beginning of a rental with credit and debit cards are accepted as a payment

Wi-Fi Easterwood Airport understands traveler’s desire always to stay connected and is offering wireless internet services throughout the terminal area for everyone at the airport. Passengers can connect to Wi-Fi while they are waiting for their flight or ride. 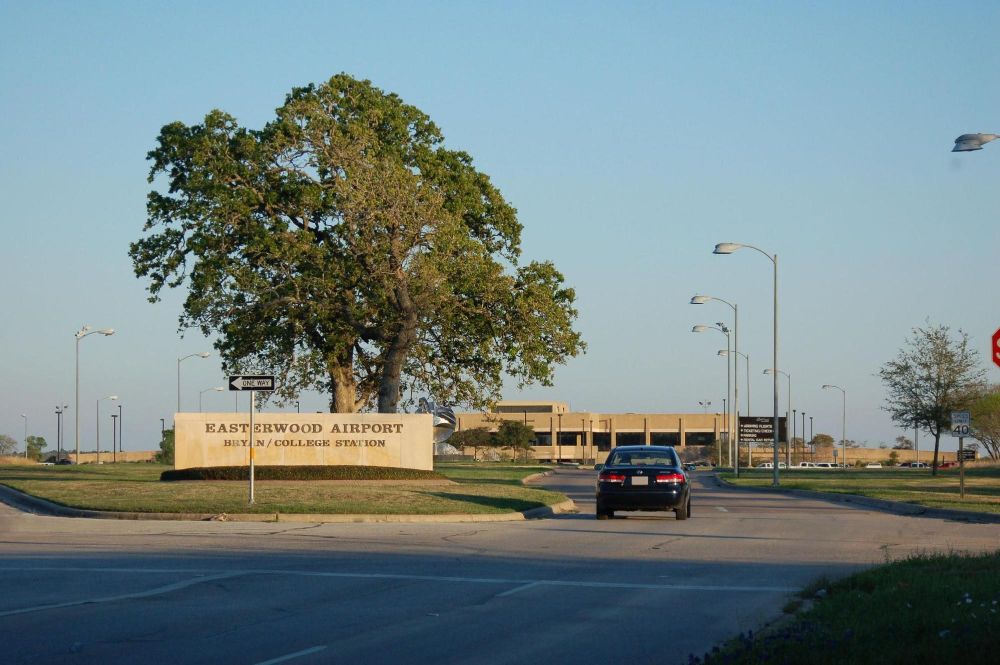 Easterwood Airport Parking Lot offers over 550 spots available at the facility. The parking lot is open for 24 hours. CLL has an uncovered lot, which means that there are no height restrictions. If someone has an oversized vehicle, it is possible to accommodate customers due to the flexible parking area that can contain buses from campus as well as military cars. Passengers can get two hours of parking for free. Afterward, each additional hour costs $1. The maximum charge on a daily rate is $7. If travelers intend to park for a week or more, they will be paying $35. Spaces for disabled patrons are also available at CLL. 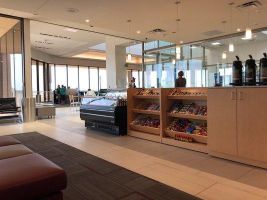 Due to being a relatively small facility, Easterwood airport does not include Duty-free area. However, Cafe, which is conveniently located inside the terminal, is available and welcomes passengers to visit it and try out different options provided on the menu list.

Easterwood Airport (Easterwood Field) is serving as the regional airport for Texas A&M University, Brazos County, Texas, and Bryan-College Station. Tha facility can be reached from Farm-To-Market Road 60 West (Raymond Stotzer Parkway), about 0.25 miles (0.40 km) from Texas A&M University and three miles southwest of College Station. No public transportation is available from Easterwood Airport to the surrounding areas; however, in 2019, a new university bus route started its operations aimed to connect CLL with the Texas A&M Hotel and Conference Center and Engineering Quad. Easterwood Airport bus route is available only to those with a University ID or Brazos Transit District ID. Despite managing and owning the property, there are no aviation courses at the University.

In 1938 the Board of Directors of the Agricultural and Mechanical College of Texas (as Texas A&M was known at the time) authorized the development of the facility at the existing site. The University applied to the Civil Aeronautics Authority (CAA) to receive a certification as a primary flight training school that was under provisions of the Civilian Pilot Training Program.

In 1940 CLL officially opened and was named after the U.S. Navy Lieutenant Jesse L. Easterwood. The Lieutenant was a former A&M student who was enlisted in the British Royal Naval Air Service in 1917. After being commissioned as Ensign, Easterwood was promoted to Lieutenant in the Naval Air Service. Thus he became the second American who qualified as Naval Aviation Pilot. In 1918 he was serving with the Royal Flying Corps and achieved sixteen successful raids behind German lines. The Lieutenant served in three foreign countries and died in an airplane accident in the Canal Zone on May 19, 1919. Jesse Easterwood was awarded the Navy Cross posthumously “for distinguished and heroic service as an aviator.”

In 1940 the airport had one hangar and a turf landing strip and taxiway, which were eventually paved through funding that was provided by the CAA, the Works Projects Administration (WPA), and Texas A&M.

In 1948 a large hangar was moved to the airfield from a U.S. Army flying field located near Corsicana, Texas. The FAA established a Flight Service Station (FSS) at CLL in 1951, and the same year, Pioneer Airlines started scheduled air service. Numerous changes have occurred, including relocating the Flight Service Station to Montgomery County, and American Eagle and United Express now offer scheduled air service.

The first control tower was erected at the Easterwood Airport in 1952, and in five years, a commercial passenger terminal was constructed. In 1984 work started on an extension of Runway 16-34 to its present 7,001-foot (2,134 m) length. At the same time, the parallel taxiway was extended to Runway 16-34.

Work on improvements of the airport access road started in 1988 as well as constructions of a new passenger terminal began. The new McKenzie Terminal opened in 1990, and it was decided to convert the old passenger terminal into a general aviation terminal. Subsequently, in 1994 CLL was remodeled and re-opened for service as a modern aviation facility, housing line service, flight operations as well as support of personnel.