Burlington International Airport is located in the Southern part of Burlington, in the County of Chittenden, Vermont, in the United States. BTV is a joint-use civil-military airport, which is 6km far from Burlington's central business district. Instead of the fact that Vermont is the most populous municipality and still 40% of passengers come from Quebec. The official code for IATA and FAA is - BTV, concerning - ICAO it is - KBTV. The authority figures of BTV are 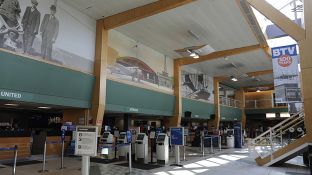 Departures Passengers going to Burlington International Airport should take into consideration that they have to arrive at the airport two hours before their scheduled departure. Several unforeseen circumstances may interrupt the trip, and it's better to leave home earlier. For example, if traveling from Montréal or Plattsburgh, 20 minutes should be added to unforeseen road closures. Also, checking the status of the flight in advance will save time too. The measures of TSA Security Travelers are required to follow the instructions before they go to the TSA security checkpoint. Firstly, they have to check their ID and Boarding passes, as in both of them should be the same name, this procedure will make the security screening much faster. Passengers should know 3-1-1 Rule for Carry-Ons, which means they are allowed to take only one 1-quart zip-top plastic bag, where there will be 3.4-ounce containers of liquids/ gels. If a customer h 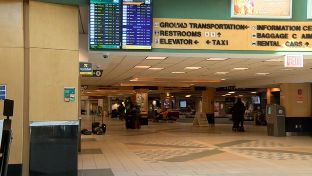 US Customs, and Border Protection Program (CBP) at BTV Passengers who enter the United States via Burlington International airport should be checked by US Customs and Border Protection Program officers. All their belongings are the subject to check as well. BTV is a member of the Global Entry Program, that allows low-risk travelers to receive expedited clearance through automatic kiosks, while they cross the border. Global Entry Enrollment Travelers willing to participate in the Global Entry program need to fill out an application in advance. After applying the application, the date of the interview may take several months. When an applicant submits an interview, he/she may also be checked additionally. It should be underlined that passengers will be fingerprinted, and digital photos of them will be taken during the interview. Then they will be given instructions on how to use automated kiosks inappropriate airports. There is no need to have s 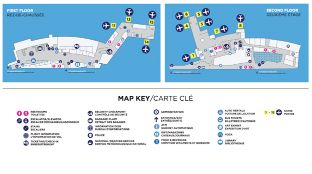 The number of terminals, and gates at BTV Burlington International Airport has two levels and two concourses - South and North. The number of Gates is 15. The first level is the main for the BTV terminal. It houses the Arrivals area with baggage claim. Also, there are car rental counters and information desks too. Concerning the Departures area, there are check-in and ticketing counters, the automated teller machine (ATM), security check, food and drink options, and access to South concourse, with gates 11-15. On the second level of Burlington International Airport, there are two skywalks to the garage parking, the restaurant, conference room, and access to North Concourse, with gates 1-8. The airport is open 24 hours, seven days a week. 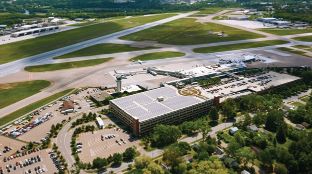 BTV postal address Burlington International Airport's precise postal address is 1200 Airport Dr, South Burlington, VT 05403, the United States. The official website of BTV gives several directions from different parts of America. For instance, if a person is coming from, NORTHERN VT, he/she should take I-89 south to exit 14E toward South Burlington, then the driver should continue the route east 1.5 miles on Williston Rd./Rt. 2, and finally, he/she should turn left, and BTV airport will be right. If coming from Montreal, travelers should take Autoroute 10E to Autoroute 35; Then, they have to turn left onto Boulevard d'Iberville/Provincial Secondary Route 133 South. As soon as they enter the US, they should continue just the same route as given above. Montreal is 2 hours far from Burlington Airport. Another route that BTV website provides is for passengers coming either from South or from East. 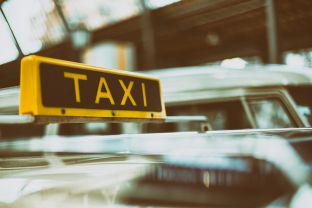 Ground transportation means Burlington International Airport allows choosing from several transportation options that meet the customers' needs and preferences. Among the deals are public bus options, taxi cabs, etc. Buses Concerning the public buses, the Chittenden County Transportation Authority's South Burlington Circulator Bus Purple Line #12 connects BTV airport to Burlington, South Burlington, and the University of Vermont. There are different fares and also schedules for each destination, for further information, it's better to observe BTV official website, where are given all details about each of them. Another bus company that offers routes from Montreal and Boston to BTV airport is Greyhound. There are central locations in each city where passengers are picked up. For example, in Burlington, pick up and drop off locations are just outside the terminal building. The bus company recommends to its customers to arrive earlie 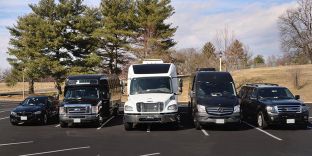 BTV Transfer options Burlington International Airport has a long list of transfer companies that are licensed to do business at the airport. Also, there are many private car operators, Uber and Lyft are available at BTV as well. Middlebury Transit Middlebury Transit is one of the companies that offers luxury transportation services, and it is situated on the premises of Burlington International Airport. For additional information, passengers can call directly to the following phone number: (802) 388-3838. AWD-VT at BTV All Wheel Drive VT car service is another operator that serves at Burlington International Airport. More than 20 years of successful operation is the guarantee that passengers will be picked up and taken to a preferred destination without any difficulty. Also, the company can be reached 24 hours, seven days a week; the following phone number will be helpful to contact them directly: (802) 363-2177. BTV Vermont VIP Services Burl

BTV Car Rental providers Burlington International Airport offers a wide range of Car Rental options. All of their counters are situated inside the terminal building, in the main level, next to the baggage carousels. Concerning the rental cars, they are parked in a renovated parking garage, which is connected to the terminal building via a covered skywalk that protects vehicles in any weather. The providers that serve at Burlington International Airport are Alamo, AVIS, Dollar, Enterprise, Hertz, Budget, National. All companies have different rates. For instance, National offers the young drivers, from 21 to 24 age, to rent a car with an average of $20.00 per day. But 'Youthful Surcharge' does not apply to all locations and all car types. The minimum age for renting a car should be 21 years. But it does not apply to all states of America; for instance, in Michigan and New York, there are not the same standards and drivers, who are alread

Burlington International Airport Services Burlington International Airport is thought to be home for passengers traveling to or from it. BTV has numerous interesting activities to do while expecting a flight or waiting for others to arrive. The customer services include ATMs that are located on both levels. Wireless Internet is fully accessible at BTV airport. Also, there are charging stations in North concourse. Vending machines and restrooms are also accessible at BTV airport. Another advantage of Burlington International Airport is also rocking chairs, that is the guarantee of perfect relaxation, during waiting. The information desk works from 4:00 p.m to midnight, it can be found on the first floor, or they can be reached on the following telephone number: (802) 863-2874. Green Roof Green Roof is on the top of the parking garage, on the six-floor, and gives the possibility to breathe fresh air and enjoy the scenery. There are plants, ben

Burlington International Airport parking Burlington International Airport has more than 2700 spaces for Parking. Even on busy days, Parking is approachable for everyone. There is no need for prior reservations. The parking space area is available 24 hours, 365 days. The parking area is fully accessible for people with disabilities; there are special elevators on each level as well. There are both Short and Long-Term parking areas at BTV airport. The Garage of BTV The airport garage can be reached from the entrance road. The terminal building is located on the right, and the garage is just the opposite. From the terminal building, the garage can be reached with the help of covered parking steps. There are two crosswalks from terminal to the garage, on both ground and second levels of the airport. Payment options The accepted card list is the following: Paying by cash or by card is accessible at in-terminal kiosks; regarding the garage exists, 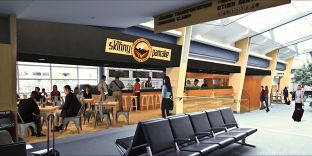 Shopping at BTV The Duty-Free is not available at Burlington International Airport. But shopping at the Hudson News Gift Shop is a good idea. The shop offers books, magazines, personal items, crafts, and local souvenirs. The Kiosks of the shop are located in each concourse (South and North), also near the ticket counter. The operation hours are from 4:00 a.m; to 7:00-8:00 p.m, it depends on the last flight time. BTV Dining options A skinny Pancake is a good option for travelers who want to taste crepes, paninis, burgers, snacks, to-go items, or local beer. The restaurant has tasty meals for breakfast, lunch, and dinner as well. There are two locations of Skinny Pancake at Burlington International Airport. The first one is available beyond the TSA checkpoint in both the north and south terminals, and the second restaurant is situated in a pre-security area in the main terminal. The working hours are from 4:30 a.m; to 6:00 - 7:00 p.m, according

Burlington International Airport is located in the Southern part of Burlington, in the County of Chittenden, Vermont, in the United States. BTV is a joint-use civil-military airport, which is 6km far from Burlington's central business district. Instead of the fact that Vermont is the most populous municipality and still 40% of passengers come from Quebec. The official code for IATA and FAA is - BTV, concerning - ICAO it is - KBTV. The authority figures of BTV are

From the very beginning, Burlington International Airport was called Burlington Municipal Airport, and the first aircraft landed in 1920. During World War II, BTV was the busiest municipal airport in the world, with 662 and 793 landings, in 1942-1943. In 1969, the Board of Aldermen voted to change the "Municipal" into "International," to help the rebranding process and take away the perception that BTV was a small, community-based airport.

The first renovation of the terminal building was in 1971 when the airport added 40,000 square feet. After it, during the years 2000-2008, another expansion project took part in Burlington International Airport. As a result, five new gates were added, with four boarding bridges. Also, the customer service area and the parking garage was improved. For interior decoration, Marble, Granite, and Maple were used.

The last development of Burlington International Airport was in 2012-2013 when the parking area was expanded, and today there are more than 2700 spaces. Moreover, upper concourse bathrooms were renovated too.

The following airlines serve at Burlington International Airport: DELTA, JETBLUE, PORTER, UNITED, and AMERICAN. Concerning the seasonal destinations, American Airlines flies into Charlotte and American Eagle in Chicago. Regarding Frontier Airlines, its seasonal flights are in Denver and Orlando. Also, United Airlines has a seasonal route to Denver.

According to statistics of 2018-2019, the top domestic flights from BTV to the following destinations were: New York, Chicago, Newark, Philadelphia, Washington, Detroit, Charlotte, and Atlanta.

The Capacity of Burlington International Airport

The passenger boardings of BTV

According to the Federal Aviation Administration (FAA), the records of 2016, regarding passenger enplanements is - 588,504. It had an increased 1.3% compared to 2015 when the total passenger number was - 581,143. The rates have changed on the better side as in 2009, and the BTV airport had 700,592 passenger boardings. Concerning the following year, 2010, the statistics show an 8.5% decrease that is - 640,790 passenger boarding. As Burlington International Airport has more than 10,000 passenger enplanements annually, it was categorized as primary commercial service, and FAA included BTV in the National Plan of Integrated Airport Systems from 2011 to 2015.