The Regional Aerodrome Bern-Belp (marketing name “Bern Airport,” officially designated as Regionalflugplatz Bern-Belp in German), represents a regional aerodrome that provides services in Bern, which is considered to be de facto capital of Switzerland. The aerodrome is conveniently located within the town limits of Belp and used to operate scheduled flights to several European metropolitans as well as some leisure destinations. The facility handled 183,319 commuters in 2016, a decrease of 3.5 percent over 2015. 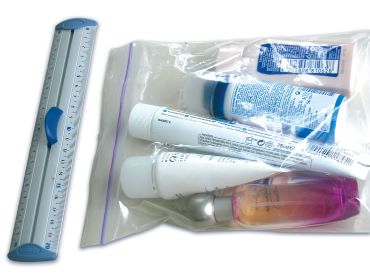 Arrival recommendation Commuters are advised to arrive at least one hour before departure at check-in in case of requiring travel assistance. The personnel is available to assist travelers within 10 minutes. The facility ensures that passengers board their plane on time. In case, for some reason, customers were not able to inform their travel agency or airline in advance, the airport would make all efforts to ensure they have access to the aircraft on time. However, passengers should remember that no guarantees can be provided. Check-In At Bern Airport, commuters are welcome to benefit from the shortest check-in time in the country where 20 minutes are sufficient in case of the regular flights. For vacation travels, passengers are advised to arrive at least 45 minutes before their scheduled flight’s departure time at the facility. Travelers can also benefit and use the extra time to pack their suitcase stress-free at home and to get into 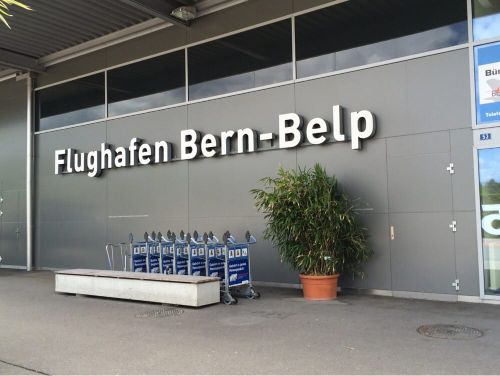 Baggage Claim Baggage Claim carousel at the regional Aerodrome Bern-Belp is conveniently available inside the arrivals area of the facility. After picking up, their belongings customers can find their transportation service and use free Wi-Fi at the airport if necessary and leave the airport whenever it is convenient for them. 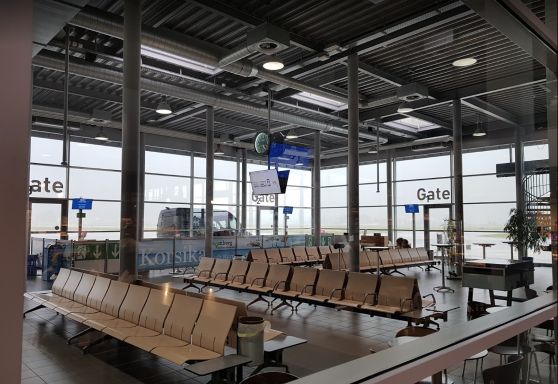 Even though the passenger terminal of the Bern Airport is relatively small, it provides commuters with a lot of different amenities available throughout the building. The terminal is divided into arrivals and departures areas. Bern airport makes every effort to establish a comfortable and convenient environment for every traveler. The facility includes all kinds of services to assist passengers with reduced mobility. Travelers are also welcome to find different lounges available at the airport to accommodate visitors by providing a relaxing area. After passing through the security checkpoint, passengers may also have some extra time before their flight. Duty-Free areas are conveniently accessible for commuters to visit, spend time, and purchase tax-free goods and products.

The Aerodrome Bern-Belp is conveniently situated within the town limits of Belp and provides services in Bern, the capital of Switzerland. The precise address of the facility is Flugplatzstrasse 31, 3123 Belp, Switzerland. 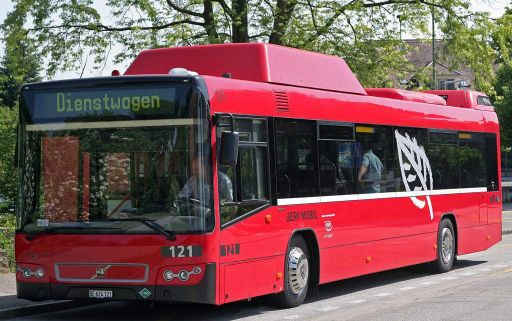 Arriving by public transport Bern Airport is easily accessed by public transport. The train ride from Bern station, for example, takes you to the airport in only 33 minutes (via Belp). Rail connections via Belp and Rubigen. The train stations Belp and Rubigen offer links with the following S-Bahn train numbers: S1 (Fribourg, Thun), by Rubigen S3 (Biel/Bienne), by Belp S4 (Thun, Burgdorf, Langnau, i.E.), via Belp S31 (Münchenbuchsee), via Belp S44 (Thun, Burgdorf, Solothurn, Sumiswald-Grünen), via Belp BERNMOBIL: Route number 160 Route number 160 assures the connection to the train and Bern Airport. The bus arrives every quarter-hour from 05h48 to 22h48 between Belp station and Bern Airport with a direct link to the S-Bahn. The last bus at 22h48 continues to Bern station. Tickets Tickets can be purchased at any ticket vending machine at the bus stations, the travel center BLS of Belp station, Libero ticket counters, via ÖV Plus a 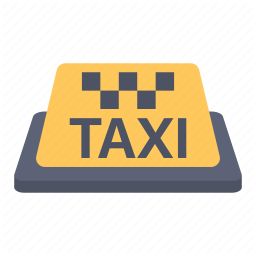 Taxi A taxi from the terminal to the center of Bern costs approximately 55 CHF (50 euros). Passengers can book their taxi at Bern Airport through TaxiTender, an online booking platform for dependable and reasonably priced airport transfers. The driver meets passengers inside the airport, with all rates inclusive, and free cancellation. Passengers who are booked on an early flight from the airport or just prefer to take a taxi to get to the facility, then they can easily book a cab by using the TaxiTender. The taxi booking service compares prices and provides an affordable airport transfer from the front door of commuters directly to the airport.

Europcar Europcar car rental agency provides passengers with friendly service, new vehicles, and low prices. Whether travelers are interested in hiring a car for pleasure or business, or they require a car or van, Europcar is ready to provide them with the right hire vehicle at Bern Airport. Europcar agency is looking forward to serving passengers at its car hire branch: Bern Airport Meet and Greet. Passengers are recommended to remember always to bring their valid credit card, driving license, and additional proof of identity (like a passport if travelers are hiring abroad). Europcar’s Green Programme Europcar company understands the environmental impact of car rental services. Due to that reason, the agency has wholeheartedly embraced a sustainable development program. It is proud to be the first car rental company at Bern Airport Meet and Greet with certified commitments. Sixt By renting a car from Bern Airport, commuters are welcome

Wi-Fi Bern airport understands the need for passengers always to stay connected, especially during travel. Due to that reason, the facility provides commuters with the complimentary Wi-Fi available throughout the terminal building. Lounge Regardless of what class of service passengers is flying, they are welcome to find a lounge that they can enter by paying at the door or through a lounge membership program (i.e., Priority Pass). Commuters can visit the individual lounge page to learn more details about the lounge itself and also to find out how to gain lounge access with just an economy class ticket. Skylounge is conveniently available airside in the main departure hall on the first floor of the airport terminal. However, the Skylounge is designated for Schengen flights only. The lounge can be accessed by paying at the door. Baggage trolleys Baggage trolleys are conveniently available at the Regional Aerodrome Bern-Belp for passengers with m

Official parking Bern Airport can be considered a relatively small facility, but it provides passengers with different parking facilities. It is possible to park the vehicle on P1, P2, P21, P31, and P5. The parking spaces of P1 and P2 can also be conveniently used to drop off or pick up travelers. However, travelers should remember that parking fees must be paid in advance. The Bern Airport valet service is referred to as CarButler Service and represents the most luxurious parking product. Alternative parking options In case passengers are interested in planning their trip and depart with peace of mind, then pre-booking their vehicle park space is the best option for them. ParkVia works with vehicle park operators to provide the right areas in the right place. The agency offers travelers with the choice of where they would like to park, comparing the best prices, services, locations, and products all in one place. Their focus on unofficial off- 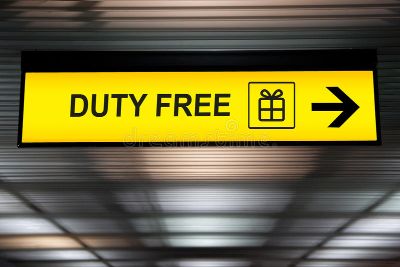 Duty-Free is conveniently available at The Regional Aerodrome Bern-Belp for passengers to visit, spend their time, and shop for the various products provided by different stores in the Duty-Free area of the facility.

The Regional Aerodrome Bern-Belp (marketing name “Bern Airport,” officially designated as Regionalflugplatz Bern-Belp in German), represents a regional aerodrome that provides services in Bern, which is considered to be de facto capital of Switzerland. The aerodrome is conveniently located within the town limits of Belp and used to operate scheduled flights to several European metropolitans as well as some leisure destinations. The facility handled 183,319 commuters in 2016, a decrease of 3.5 percent over 2015.

Bern Airport housed a base of now-defunct SkyWork Airlines whose grounding made the aerodrome to lose more than 1/3 of its turnover. At the moment, Helvetic Airways and the charter operator Peoples Airways provide several flights during the holiday season. Currently, the Swiss Federal Government’s air transport service Lufttransportdienst des Bundes have based a couple of business jets at the facility. The Helicopter Emergency Medical Service REGA has one base at Belp and two helicopter transport organizations, as well as two flying schools (one for gliders, one motorized), operate at the aerodrome.

The aerodrome was installed in 1929 by Alpar, a private airline that provided services within Switzerland until the eruption of World War II. After the war, Alpar Airlines remained in business as the aerodrome operator, supported by subsidies of the city government and cantonal. A planned expansion project in 1947 did not succeed in a popular referendum, and only in 1950, the first concrete airstrip was established. In 2014, Alpar Airlines was renamed to Flughafen Bern AG.

Multiple attempts to create an international airport in or around Bern instead of the already existent small regional aerodrome at Belpmoos failed. In 1945, the national parliament determined to establish the first international airport, currently known as Zurich Airport, at Kloten close to the Zürich instead of in Utzensdorf near Bern. However, plans for improvement there were retained as an inter-urban facility, which would require less space and therefore placate local opposition by farming interests. A 1963 airport plan near Herrenschwanden was abandoned due to the strong popular opposition, especially by farmers. The same conclusion was faced with a 1966 project in Rosshäusern and a 1970 project Kallnach.

In 2016, BMI regional stopped its flights from Munich Airport to Bern after two years, which is served in direct competition with SkyWork Airlines. In May 2018, RUAG stated that it would cease its operation at the aerodrome in 2018, indicating declining business. In 2018, the most significant carrier at the aerodrome SkyWork Airlines discontinued all operations. At that time, Helvetic Airways was left as the only Swiss airline that served the aerodrome. Since then, however, Chair Airlines, and a Swiss Airline, has started offering services to the airport.