George Best Belfast City Airport represents a single-runway property in Belfast, Northern Ireland. Established in County Down, it is near to the Port of Belfast and is located three miles from Belfast City Centre. The facility shares the place with the Short Brothers/Bombardier aircraft manufacturing property. The airport started commercial operations in 1983 and was known as “Belfast City Airport” until it was renamed in 2006 in memory of George Best, the professional football player from Belfast. The property includes a CAA public use aerodrome license (number P862) that permits flights for the public transport of travelers or flying instruction. 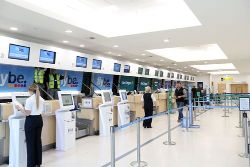 Security The safety and security of commuters and workers at George Best Belfast City Airport represent an absolute priority. For making a travel experience as smooth as possible and avoid unnecessary delays, passengers are asked to pay special attention to the security procedure. Hand Baggage Hand baggage policies and restrictions are at the responsibility of each airline. Travelers are required to learn about the number, size, and weight of allowed bags with the airline before they arrive at George Best Belfast City Airport. For example, only the EU policy hand baggage size is 56cm x 45cm x 25cm. Sporting items such as racquets, bats, cues, and clubs are not permitted as hand luggage. Similar oversized items and other bags that are over 56cm x 45cm x 25cm have to be processed separately and placed in the hold of the aircraft. Liquids Only limited quantities of liquids are allowed to be carried through airport security into the departure loun 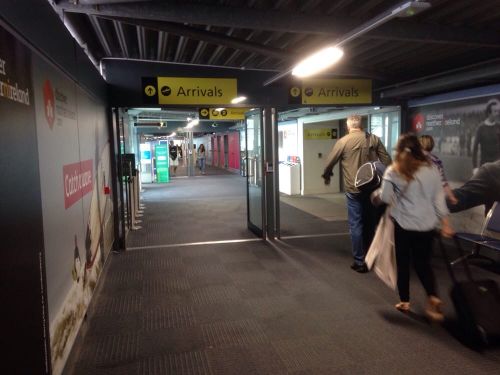 Border Force Once passengers landed at George Best Belfast City Airport, they will be required to pass through the border passport control checkpoint. These control methods involve an examination of the passport or identity card and confirmation of commuters’ right to travel into the U.K. if demanded. U.K. Border Force manages the passport control area, and passengers are recommended to have their documentation ready, removed from a wallet or holder, and have it open on the page with a photo. Customers are required to remove their headwear or sunglasses and stay from using any mobile device. 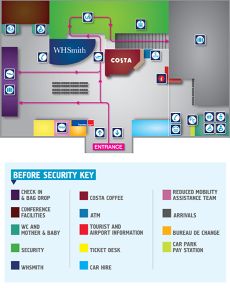 Established in County Down, George Best Belfast City Airport is near to the Port of Belfast and is located three miles from Belfast City Centre. The exact address of the facility is Belfast BT3 9JH, United Kingdom. 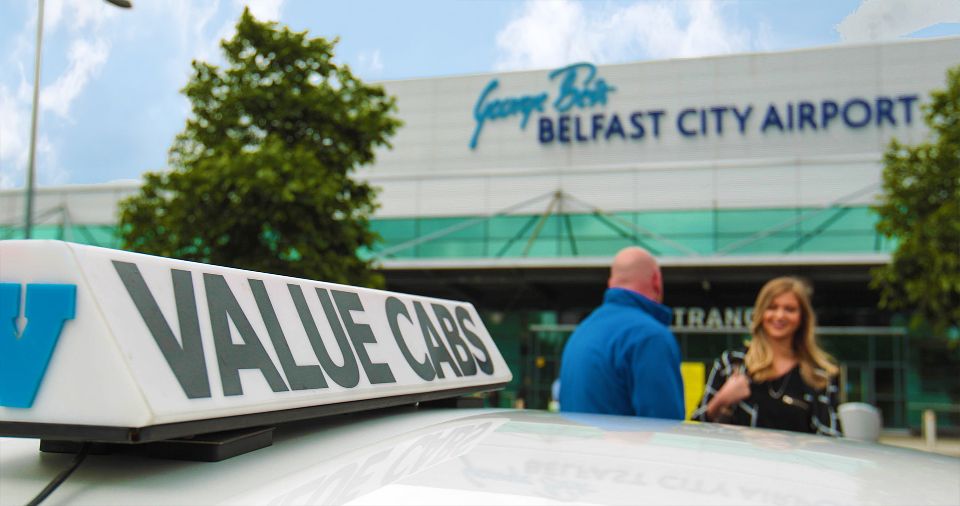 Bus Belfast City Airport includes a designated Airport Express 600 Service with buses that operate every 30 minutes at peak times from the front of the terminal to the center of town. The trip only takes approximately 10 minutes. Airport Express 600 Service (Belfast City Centre to George Best Belfast City Airport) Tickets are available for sale at the tourist information desk available in the arrivals area or from the driver. Schedules and prices are subject to change at any time at the discretion of Translink. For further information, up-to-date fares and timetables, passengers can visit the website indicated below. https://www.translink.co.uk/ Train Translink runs NIRailways train services in Northern Ireland. When traveling to BHD by train, passengers may want to disembark at Sydenham train station. When moving from the airport, commuters can board the train at Sydenham train station and travel to either Great Victoria Street station or Be 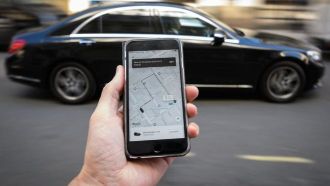 Uber Regardless if passengers are traveling from BHD to Belfast City Centre or Belfast central station, commuters can count on Uber that will take them to the desired destination. By using an Uber app, passengers can request a trip more comfortable and quicker. After picking up their belongings in the baggage claim area, commuters can open an app and request a ride considering their luggage requirements and group size. The app will also indicate directions to a pick-up area. Uber pick-up locations at BHD are subject to change. After reaching the assigned pick up location, commuters can use an app to contact the driver in case of not being able to find the car. Uber prices from and to the airport can vary depending on several factors. Passenger can use a price estimator available at the app to learn about the approximate fare. When choosing to request a ride, the app will show the time that driver will require to arrive at the pick-up location.

If passengers need to rent or hire a vehicle to travel from Belfast City Airport to their next destination, they can choose from any one of the car rental providers conveniently available inside the terminal building. Agencies are offering a wide range of car rental options at great rental prices. Worldwide known agencies like Avis, Budget, Hertz, Europcar are available to offer services at George Best Belfast City Airport.

Lost & Found If the passenger loses an item at Belfast City Airport, or onboard an inbound aircraft, they should contact the Lost Property Department with the Contact Us form. A representative of the team will get back to them within 48 hours. Passports, driving licenses, as well as other legal documents, are not stored at Belfast City Airport but are posted back to the appropriate government offices every week. Bank cards are also returned to the relevant bank every week. Items that cannot be kept for cleanliness reasons are immediately disposed of. Perishable items also cannot be kept and, accordingly, are also be arranged quickly. Luggage that is checked-in at the facility and does not arrive at the end destination is not classified as lost property. Instead, it is categorized as mishandled baggage and should be followed up with the relevant airline or its handling agent Swissport. Lost belongings are available for collection from Monday 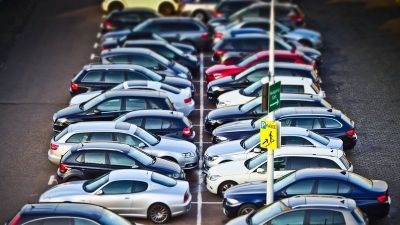 Short Stay The short-stay park at George Best Belfast City Airport represents the best option for when customers need to meet and greet a passenger from Arrivals or in case of short journeys. The short-term parking area is the first car park on the right-hand side as passengers enter the facility grounds and are available just minutes away from the terminal building. Alongside the short stay car park, commuters can find the pick-up/drop-off lanes. If passengers enter the short stay car park or the pick-up/ drop off area and leave within 10 minutes, their stay will be free of charge. Long Stay The long-stay car park at the airport can be considered the most cost-effective option in case of extended stays, long journeys, and those who leave Belfast City Airport for a one week or two week holiday. The long-stay car park represents the most significant car park and is approximately within a ten-minute walk from the terminal building. Premier Park 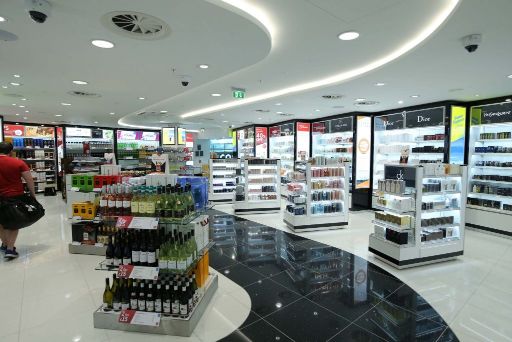 There is no better way to spend the time while waiting on the flight than enjoying a spot of retail therapy. Belfast City Airport includes a selection of stores and retail outlets for passengers to browse in and purchase from, including World Duty-Free, House of Ireland, and WHSmith. The facility is stocking everything from cosmetics to confectionery, fragrance to fashion accessories, and spirits to sunglasses. Passengers are welcome to treat themselves to a bottle of wine or champagne, purchase a travel companion teddy bear for kids or pick up the last-minute giftset for a loved one, World Duty-Free offers it all. Passengers are welcome to use the fantastic World Duty-Free’ Reserve and Collect’ service. Shop 1000s of brands online, choose and pay for your products from the comfort of your own home, then simply collect your pre-packaged items when you arrive at the airport. House of Ireland sells giftware, fashion clothing & jewe

George Best Belfast City Airport represents a single-runway property in Belfast, Northern Ireland. Established in County Down, it is near to the Port of Belfast and is located three miles from Belfast City Centre. The facility shares the place with the Short Brothers/Bombardier aircraft manufacturing property. The airport started commercial operations in 1983 and was known as “Belfast City Airport” until it was renamed in 2006 in memory of George Best, the professional football player from Belfast. The property includes a CAA public use aerodrome license (number P862) that permits flights for the public transport of travelers or flying instruction.

The terminal primarily handles intra-UK flights. It provided services for over 2.4 million passengers in 2019, but the peak was in 2010, estimated at 2.7 million. The property operated as a major base for Flybe, which started operations at the airport in 1993 and was the biggest operator at Belfast City until 2020. The facility also served as a base for Aer Lingus from 2012 until 2019.

Shorts built Sydenham Airport alongside its Belfast factory at Sydenham in 1937. It was opened in 1938 by Anne Chamberlain, who was the wife of then British Prime Minister, Neville Chamberlain. The inaugural flight happened to Glasgow, Scotland. This became the main civilian Airport in Belfast from 1938 to 1939. The Royal Navy requisitioned the property in the period of WWII. The name was changed to HMS Gadwall. RAF Nutts Corner then became the primary Airport of Belfast.

In 1983, following interest from customers and airlines, the airfield was opened for commercial flights as Belfast Harbour Airport.

A new terminal was formally opened in 2001. Following the significant capital investment, Bombardier sold the property in 2003 for £35 million to the Spanish company Ferrovial, which re-sold it in September 2008 for £132.5 million to ABN Amro Global Infrastructure Fund.

In 2006, it was stated that the facility would be renamed in honor of Northern Irish footballer George Best. The renaming of the airport provoked controversy, with many articles in national and local print media due to the mixed responses of Belfast residents.

In 2007, Ryanair set its 23rd base at BHD, operating five routes and carrying 800,000 passengers annually. The airline shut down its Belfast City base in 2010 due to delays in the planned runway extension. The airline announced that it would fly to European destinations if the runway were extended.

In 2010, easyJet started flights to London Luton, though the airline moved the route back to Belfast International in 2011.

In 2011, Bmibaby relocated its Belfast base to BHD, to keep its operation under close to the sister airline BMI. The airline stopped operations from the Airport in June 2012.

In 2012, Aer Lingus relocated its services from BHD to the airport. The airline started flights to five destinations, though it has since decreased its operations to just one route. Spanish carrier Vueling began summer-seasonal flights to Barcelona in 2015, but the same year the route was canceled. Scottish airline Loganair began operations to Carlisle in 2019, followed by Dundee in 2020. Flybe, which operated 80% of flights and carried over 1.6 million passengers across 14 routes, stopped operations in March 2020. Consequently, Loganair started flights to Aberdeen and Inverness.